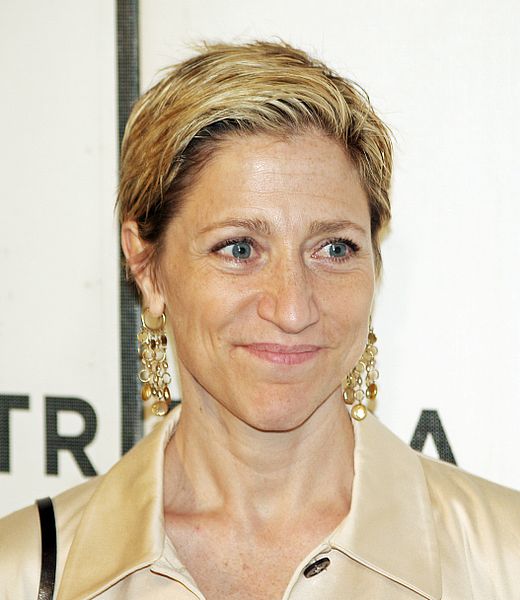 Edith Falco (/ˈiːdi ˈfælkoʊ/; born July 5, 1963) is an American television, film, and stage actress, known for her roles as Diane Whittlesey in the HBO series Oz (1997-2000) and Carmela Soprano on the HBO series The Sopranos (1999-2007), for which she received six Emmy nominations, winning three for an Outstanding Lead Actress in a Drama Series as well as winning two Golden Globes and five Screen Actors Guild Awards.

Falco portrayed the eponymous role on the Showtime series Nurse Jackie (2009-15), earning six further Emmy nominations and winning once for an Outstanding Lead Actress in a Comedy. In 2016, she played Sylvia Wittel on the Louis C.K. web series, Horace and Pete. In 2017, Falco portrayed real life defense attorney Leslie Abramson in the first season of the true crime anthology series Law & Order True Crime, for which she garnered her 14th Emmy nomination, this one for Outstanding Lead Actress in a Limited Series or Movie.

Falco's film roles include lead roles in Laws of Gravity (1992), for which she was nominated for the Independent Spirit Award for Best Female Lead and Judy Berlin (1999), and supporting roles in films including Sunshine State (2002), Freedomland (2006) and The Comedian (2016). For her role in the 2011 Broadway revival of The House of Blue Leaves, Falco earned a nomination for a Tony Award for Best Featured Actress in a Play.

Falco was born in New York City’s Brooklyn borough, to Judith Anderson, an actress, and Frank Falco, a jazz drummer who later worked for an advertising agency.[1][2][3] Her father was of Italian descent and her mother's ancestry was Swedish and English.[4][5][6] Falco's siblings are Joseph, Paul, and Ruth. Her uncle is novelist, playwright, and poet Edward Falco, an English professor at Virginia Tech in Blacksburg, Virginia.

From the age of four, she was raised on Long Island, moving with her family to Hicksville, followed by North Babylon, then West Islip.[1][7] As a child she acted in plays at the Arena Players Repertory Theater in East Farmingdale, where her mother also performed.[1][2][8]

Her family eventually moved to Northport, where she attended high school and played Eliza Doolittle in a production of My Fair Lady during her senior year.[1][2] Falco graduated from Northport High School in 1981.[1][2] She attended the acting program at SUNY Purchase,[1][2] along with fellow actors Stanley Tucci, Paul Schulze and Ving Rhames.[9] She graduated in 1986 with a Bachelor of Fine Arts in acting.[10]

Early in her career, Falco made appearances on television shows like Law & Order and Homicide: Life on the Street. Tom Fontana, executive producer of Homicide, cast Falco as Eva Thormann, the wife of an injured police officer, after watching Falco's performance in Laws of Gravity, a 1992 film directed by Nick Gomez. Fontana said of her, "She's an actress who's unadorned by any embroidery. She does everything with such simplicity and honesty, it's breathtaking."[11] A struggling actress at the time, Falco said her salary from these television episodes paid for one month's worth of rent.[12]

Her first big break in films was a small speaking role in the 1994 Woody Allen film Bullets over Broadway. Her friendship with former SUNY Purchase classmate Eric Mendelsohn, who was the assistant to Allen's costume designer, Jeffrey Kurland, helped her to be cast in the role. Mendelsohn went on to direct Falco in his feature film Judy Berlin, for which he won Best Director honors at the Sundance Film Festival. Falco went on to star in Mendelsohn's next film 3 Backyards, for which he won Best Director a second time.

During this time, Falco appeared in the films Trust, Cop Land, Private Parts (nonspeaking part), Random Hearts, On Broadway, she appeared in the Tony Award-winning Side Man and in the revivals of Frankie and Johnny in the Clair de Lune opposite Stanley Tucci, and 'night, Mother opposite Brenda Blethyn.

In 1997, Falco started portraying prison officer Diane Whittlesey, in the HBO series Oz. Falco got the role after working with Fontana on Homicide.[13]

Falco received her breakout role in the HBO drama, The Sopranos. The series premiered in 1999 and ended in 2007. She portrayed Carmela Soprano, wife of Mafia boss Tony Soprano. The series received wide acclaim, and is often considered to be one of the greatest television series of all time.[14][15][16][17][18] For her role on the series, Falco won three Primetime Emmy Awards, two Golden Globe Awards, and five Screen Actors Guild Awards. Falco, The X-Files star Gillian Anderson, Ugly Betty star America Ferrera, and 30 Rock's Tina Fey are the only actresses to have received a Golden Globe, an Emmy, and a SAG Award in the same year. Falco won these awards in 2003 for her performance as Carmela Soprano during the fourth season of The Sopranos. During her tenure on The Sopranos, Falco appeared in films such as Freedomland, and John Sayles' Sunshine State, for which she received the Los Angeles Film Critics Award for Best Supporting Actress. She also guest starred on the television series Will & Grace.

Falco at the 2009 Tribeca Film Festival

In 2011, Falco played the part of Bananas in the Broadway revival of House of Blue Leaves in New York City with Ben Stiller and Jennifer Jason Leigh, for which she received her first and only Tony Award nomination.[23] It was announced in January 2013 that Falco would star in Liz Flahive's The Madrid off-Broadway. The limited engagement, directed by Leigh Silverman, began previews on February 5 with an official opening February 26. Along with Falco, the play starred John Ellison, Christopher Evan Welch, Phoebe Strole, and Frances Sternhagen.[24]

In 2016, Falco started portraying Sylvia Wittel on the Louis CK series, Horace and Pete. The first episode was released on January 30, 2016, on C.K.'s website without any prior announcements.[25] New episodes premiered weekly until the tenth episode was released on April 2, 2016.[26] In September 2017, she began portraying Leslie Abramson in the first season of the NBC true crime anthology series Law & Order True Crime, subtitled The Menendez Murders.[27]

During the 2004 U.S. presidential election, Falco appeared in a 30-second television commercial on behalf of Mothers Opposing Bush in which she said, "Mothers always put their children first. Mr. Bush, can you say the same?"[28]

Falco has become the spokesperson for Health Care for America Now and appeared on CNN on June 25, 2009.[30]

In 2003, Falco was diagnosed with breast cancer. She chose not to make the news public until the following year.[31] Falco has had struggles with alcohol and decided to become sober sometime in the early 1990s after "one particular night of debauchery." She said in an interview that it was difficult to be around the hard-partying cast of The Sopranos; "This cast, in particular, they really love to hang out and party. They make it look like fun. And it was fun for me! They spend a lot more time without me than with me, by my own choice. I'm always invited, and I'm always there for two minutes and I leave, because I can't live in that world anymore. It's too dangerous."[31] She is an advocate of Alcoholics Anonymous' 12-step program.[32]

In 2012, Falco was the subject of an episode of Who Do You Think You Are?[36] which focused on her descent from the daughter of a Cornish master mariner, from Penzance, who was born at sea and died in 1840.[37][38]

Falco is vegan and has worked with PETA on projects, including a public-service message urging parents to keep their children away from the circus.[39] She told Parade magazine that, "I believe this is at the base of everything bad in society—you can bring it back to cruelty to animals. If you don’t have respect for the life of any kind, it will manifest in more obvious ways."[40]

Main article: List of awards and nominations received by Edie Falco
Report a problem
Send a message to Edie Falco at FanPal • 2021