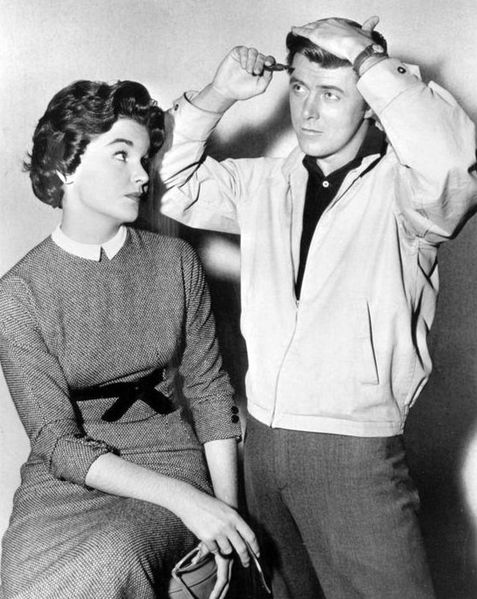 Edd Byrnes (born July 30, 1933) is an American actor best known for his starring role in the television series 77 Sunset Strip. He also was featured in the 1978 film Grease as television teen-dance show host Vince Fontaine, and was a charting recording artist with "Kookie, Kookie (Lend Me Your Comb)" (with Connie Stevens).

He was born Edward Byrne Breitenberger. He had two siblings, Vincent and Jo-Ann. When he was 13, his father died. He then dropped his last name in favor of "Byrnes" based on the name of his maternal grandfather, Edward Byrne, a fireman.[1]

Byrnes developed the urge to act at high school but did not seriously consider it until after he had tried a number of different jobs, such as driving an ambulance, roofing and selling flowers.[2]

In 1956, Byrnes got a non-paid job in a summer stock theatre company in Connecticut, the Litchfield Community Playhouse. He soon began appearing their plays as an actor. Brynes tried to get roles in Broadway theatre productions, but had no luck. In 1956, he was cast in an episode of the Crossroads TV program. Byrnes also appeared in the Wire Service and Navy Log episodes of Crossroads.

After a year, Byrnes moved to Hollywood.[2] He appeared in a local stage production of Tea and Sympathy.[3] Byrnes also appeared in episodes of The Adventures of Jim Bowie, and Telephone Time and in the film Fear Strikes Out (1957). Byrnes was third-billed in the film Reform School Girl (1957) for American International Pictures. He had a support role in the Warner Bros films Johnny Trouble (1957).

Also in 1957, Byrnes signed a three-year contract with John Carroll of Clarion Pictures.[4]

Byrnes tested for roles in the films Bernadine and Until They Sail but did not get them.[5] A contemporary report described him as "a Tab Hunter type."[6] However he did guest star on an episode of Cheyenne made by Warner Bros. The studio liked Byrnes' work and signed him to a long term contract in May 1957.[7]

Warners started off Byrnes' contract by assigning him to a comic role in The Deep Six (1958).[8]He also appeared in episodes of Cheyenne, The Gale Storm Show: Oh! Susanna and Colt .45.

When Tab Hunter refused a role in the film Darby's Rangers (1958), Byrnes stepped in instead. He was wanted for Baby Face Nelson (1957) but Warners would not loan him out.[9]

He appeared as a guest star in Maverick, The Deputy, and Sugarfoot, in the latter with John Russell, Rodolfo Hoyos, Jr., and Will Wright in the 1958 season-premiere episode "Ring of Sand." He was in another war film with Garner, Up Periscope (1959).

Byrnes was cast in Girl on the Run, a pilot for a detective show starring Efrem Zimbalist Jr. Byrnes played contract killer Kenneth Smiley who continually combed his hair - Byrnes said this was an idea of his which the director liked and kept in.[10] Around this time Brynes decided to change his acting name from "Edward" to "Edd". "I just dreamed it up one day," he said. "Edward is too formal and there are lots of Eddies."[2]

The show aired in October 1958[11] and was so popular Warners decided to turn it into a TV series 77 Sunset Strip.[2] Byrnes' character became an immediate national teen sensation, prompting the producers to make Byrnes a regular cast member. They transformed Kookie from a hitman into a parking valet at Dino’s Lodge who helped as a private investigator. Efrem Zimbalist, Jr., explained the situation to the audience:

We previewed this show, and because Edd Byrnes was such a hit, we decided that Kookie and his comb had to be in our series. So this week, we'll just forget that in the pilot he went off to prison to be executed.

— From the pre-credit sequence for the episode "Lovely Lady, Pity Me"

Kookie's recurring character—a different, exciting look that teens of the day related to—was the valet-parking attendant who constantly combed his piled-high, greasy-styled teen hair, often in a windbreaker jacket, who worked part-time at the so-called Dean Martin's Dino's Lodge restaurant, next door to a private-investigator agency at 77 Sunset Strip in West Hollywood. Kookie frequently acted as an unlicensed, protégé detective who helped the private eyes (Zimbalist and Roger Smith) on their cases, based upon "the word" heard from Kookie's street informants. Kookie called everybody "Dad" (as in "Sure thing . . . Dad") and was television's homage to the "Jack Kerouac" style of cult-hipster of the late 1950s.[12]

The show became the most popular on in the country.[13] To the thrill of teen viewers, Kookie spoke a jive-talk "code" to everyone, whether you understood him or not, and Kookie knew, better than others, "the word on the street." Although the Kookie character was at least several years older than Jim Stark, James Dean's character in the film Rebel Without a Cause, Byrnes exuded a similar sense of cool. Kookie was also the progenitor of Henry Winkler's The Fonz character of the Happy Days series (switch hot rod for motorcycle; same hair and comb). By April 1959 Byrnes was among the most popular young actors in the country.[14]

Kookie's constant onscreen tending of his ducktail haircut led to many jokes among comedians of the time, and it resulted in the 1959-charted (13 weeks) 'rap' style recording, "Kookie, Kookie (Lend Me Your Comb)", recorded with actress and recording artist Connie Stevens, and which reached #4 on the Billboard Hot 100. It sold over one million copies and was awarded a gold disc by the RIAA.[16][17] The song also appeared on the Edd Byrnes album, entitled (what else) Kookie. He and Stevens appeared together on ABC's The Pat Boone Chevy Showroom. During the run of 77 Sunset Strip, Byrnes, as the "Kookie" character, was a popular celebrity (Elvis Presley-level national attention), and Byrnes received fan-mail volume that reached 15,000 letters a week, according to Picture Magazine in 1961, rivaling most early rock-recording stars of the day.[citation needed]

Warners put him in the second lead of a Western, Yellowstone Kelly (1959); he supported Clint Walker, star of another Warners show, Cheyenne. It was a minor success at the box office.[18]

Byrnes walked off the show in the second season, demanding a bigger part and higher pay. In November 1959 Warners put him on suspension. They eventually offered $750 a week but he refused. In April 1960 they came to terms and Byrnes went back to work.[19][20]

Owing to restrictions in his Warner Brothers television contract, Byrnes was forced to turn down film roles in Ocean's Eleven (1960), Rio Bravo (1959), North to Alaska (1960), and The Longest Day (1962). He tested for the role of John F. Kennedy in PT 109, but President Kennedy preferred Cliff Robertson.[citation needed]

Instead he guest starred on Lawman. Byrnes made a cameo as Kookie in Surfside Six and Hawaiian Eye, a 77 Sunset Strip spin off. He bought a story for Warners Make Mine Vanilla but it was not made.[21] He threatened to punch a photographer who was trying to take a photo of him getting a marriage licence.[22] He did some summer stock in 1962 with his wife.[23]

Although Byrnes was a popular celebrity, the years of unfortunate "Kookie" typecasting led him to ultimately buy out his television contract with Warner Brothers to clear his way for films—though it was accomplished too late to allow Byrnes to capitalize on feature-length-cinema projects based upon his established television-series fame.

In August 1963 Byrnes bought up the remaining ten months of his contract with Warner Bros and left Sunset Strip. "No more hipster image for me," said Byrnes. "From now on I'd like to establish myself as a movie star."[24]

Byrnes appeared in episodes of The Alfred Hitchcock Hour, Burke's Law and Kraft Suspense Theatre. He travelled to Yugoslavia where he was one of several names in Roger Corman's war film The Secret Invasion (1964). While in Europe he signed to do a TV show in Munich.[25]

Back in the US he made a pilot for a TV series, Kissin Cousins, based on the Elvis Presley film Kissin' Cousins (1964) with Byrnes to play the lieutenant played by Presley in the film.[26][27] It did not go to series. Byrne starred in a beach party movie financed by Corman, Beach Ball (1965). He was in episodes of Mister Roberts, Honey West, and Theatre of Stars and did Picnic, Bus Stop, Sunday in New York, Sweet Bird of Youth and Cat on a Hot Tin Roof on stage in stock.[28][29]

The shadow of Kookie hung over him. "People think that's the only role you can play," he said in 1966. "Producers and directors still think of me as the kid I played on the Strip. I've been offered other series but they've still wanted to cast me as the same kid."[30]

Byrnes returned to Europe for several spaghetti westerns, including the 1967 films Renegade Riders, Any Gun Can Play and Red Blood, Yellow Gold.[31] In 1969 he said he made more money in the preceding year than in his entire time on Warner Bros.[32]

Back in the US he worked mostly in TV: episodes of Mannix, Love, American Style, The Virginian, Adam 12, and The Pathfinders. He was also in the TV movies The Silent Gun (1969) and The Gift of Terror.

Byrne was in the "Duo-Vision" horror film Wicked, Wicked in 1973, and as a TV interviewer in the David Essex film Stardust (1974).

In 1974, Byrnes hosted the pilots of Wheel of Fortune but he was replaced by Chuck Woolery.[33]

He was a guest star in Marcus Welby, MD, Thriller, Police Story, Police Woman, and Sword of Justice and was in the TV movies Mobile Two and Telethon.

Byrnes played the role of the Dick Clark-like dance-show host Vince Fontaine, host of National Bandstand, in the 1978 movie Grease.

One of his final roles was Shake, Rattle and Roll: An American Love Story (1998).

Byrnes' son by Asa Maynor is Logan Byrnes, a television news anchor for Fox-11 News in Los Angeles, California. Previous to 2016, he was at Fox Connecticut since 2008.[35]

As a tribute to his enduring celebrity and his iconic "Kookie" character, Byrnes has ranked #5 in TV Guide's list of "TV's 25 Greatest Teen Idols" (23 January 2005 issue). He wrote an autobiography in 1996 entitled Kookie No More.[citation needed]

Byrnes appeared during the Memphis Film Festival in June 2014, in which he was reunited with his former Yellowstone Kelly co-star Clint Walker.[36]

Report a problem
Write to Edd Byrnes at FanPal • 2022