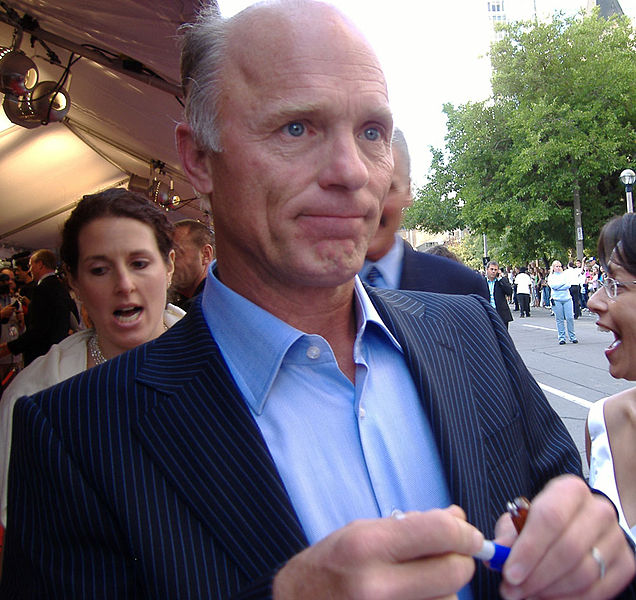 In television, Harris is notable for his roles as Miles Roby in the miniseries Empire Falls (2005) and as United States Senator John McCain in the television movie Game Change (2012), the latter of which earned him the Golden Globe Award for Best Supporting Actor - Series, Miniseries or Television Film. He currently stars as the Man in Black in the HBO science fiction-western series Westworld (2016-present), for which he earned a nomination for the Primetime Emmy Award for Outstanding Lead Actor in a Drama Series.

Harris was born at the Englewood Hospital in Englewood, New Jersey, and was raised in Tenafly, New Jersey,[1] the son of Margaret (née Sholl), a travel agent, and Robert L. "Bob" Harris (1922-2014), who sang with the Fred Waring chorus and worked at the bookstore of the Art Institute of Chicago.[2] He has two brothers, Paul and Robert.[2] Harris was raised in a middle-class Presbyterian family.[3][4] His parents were from Oklahoma.[5] He graduated from Tenafly High School in 1969, where he played on the football team, serving as the team's captain in his senior year.[6][7]

A star athlete in high school,[1] Harris competed in athletics at Columbia University in 1969.[8] When his family moved to New Mexico two years later, Harris followed, having discovered his interest in acting in various theater plays. He enrolled at the University of Oklahoma to study drama.[1] After several successful roles in local theaters, he moved to Los Angeles and enrolled at the California Institute of the Arts, where he spent two years and graduated with a Bachelor of Fine Arts in 1975.[1]

Harris began his career on the stage. In 1976, he played an FBI agent in the world premiere of Thomas Rickman's play, Baalam at the Pasadena Repertory Theatre located at the historic The Hotel Carver. He followed that at the Pasadena Repertory Theatre in 1976 playing Lot in the West Coast premiere of Tennessee Williams's play Kingdom of Earth (aka The Seven Descents of Myrtle).

Harris' first film role came in 1978 with a minor part in the suspense film Coma, starring Michael Douglas. His first major role in a film came two years later with Borderline (1980), in which he starred alongside Charles Bronson. In 1981, Harris played the lead, William "Billy" Davis, a king of a motorcycle riding renaissance-fair troupe (a role modeled after King Arthur), in Knightriders. The following year, he has a small role as Hank Blaine in Creepshow, directed by George A. Romero.[citation needed]

In 1983, Harris became well known after portraying astronaut John Glenn in The Right Stuff.[1] In 1984, he co starred in the Robert Benton directed drama film Places in the Heart; during production of this film, Harris met and married his wife Amy Madigan.[citation needed]

In 1986, he received a Tony Award nomination in the Best Actor in a Play category for his role in George Furth's Precious Sons. He also won the Theatre World Award and Drama Desk Award for Outstanding Actor in a Play for his performance.[9] Harris then portrayed William Walker, a 19th-century American who appointed himself President of Nicaragua, in Walker (1987). That same year, he played Harry Nash in the HBO television thriller film The Last Innocent Man.

In 1988, he acted in Agnieszka Holland's To Kill a Priest, starring Christopher Lambert, based on Jerzy Popiełuszko and his murder under the Polish communist regime. It was well received by critics.[10]

In 1989, his role as David "Dave" Flannigan in Jacknife earned him his first Golden Globe Award nomination, for Best Supporting Actor - Motion Picture.[11] Also in 1989, he portrayed Virgil "Bud" Brigman in the sci fi film The Abyss, directed by James Cameron.[citation needed]

In 1992, Harris co starred as Dave Moss in the drama film Glengarry Glen Ross, based on the play of the same name by David Mamet. He won the Valladolid International Film Festival Award for Best Actor for his performance in the film. He next appeared in the films The Firm (1993) and Needful Things (1993), before portraying the lead role of Kyle Bodine in the neo noir film China Moon (1994).[citation needed]

Harris made his directorial debut in 2000 with the drama biopic Pollock, in which he also starred as artist Jackson Pollock. He was nominated for his first Academy Award for Best Actor (and third Oscar overall) for his performance.[15] To prepare for the role, he built a small studio in which to copy the painter's techniques. Two years later, Harris was nominated for his fourth Academy Award (third in the Best Supporting Actor category) for his role as Richard Brown in the British American drama film The Hours.[16]

In between the two Oscar nominated roles, he appeared in the biographical drama A Beautiful Mind (2001) and portrayed German sniper Major Erwin König in the war thriller Enemy at the Gates (2001). From June to July 2002, he starred in adverts for the Vauxhall Vectra in the United Kingdom.[17]

For his lead role as Miles Roby in the 2005 miniseries Empire Falls, Harris was nominated for the Primetime Emmy Award for Outstanding Lead Actor in a Miniseries or a Movie and the Golden Globe Award for Best Actor - Miniseries or Television Film.[18] Also that year, he played a vengeful mobster in David Cronenberg's A History of Violence (2005) starring Viggo Mortensen. In 2006, he portrayed composer Ludwig van Beethoven in the film Copying Beethoven,[19] and starred in the television documentary film The Armenian Genocide as American diplomat Leslie Davis. He next appeared alongside Casey Affleck and Morgan Freeman in the Ben Affleck directed neo noir mystery film Gone Baby Gone (2007).[20] Harris then co-starred as the antagonist Mitch Wilkinson in National Treasure: Book of Secrets (2007), alongside Nicolas Cage.[21]

In 2008, he co wrote, directed and starred along with Viggo Mortensen in the western Appaloosa. In 2010, he and wife Amy Madigan appeared together in Ash Adams' independent crime drama Once Fallen. Later that same year, Harris starred in the survival drama The Way Back as Mr. Smith. His performance received much critical praise, and he was suggested by critics to receive a fifth Oscar nomination.[22]

In 2012, he co-starred alongside Sam Worthington in the thriller film Man on a Ledge for Summit Entertainment.[23] He then won the Golden Globe Award for Best Supporting Actor - Series, Miniseries or Television Film and was nominated for the Primetime Emmy Award for Outstanding Supporting Actor in a Miniseries or a Movie for his performance as Senator John McCain in the HBO made for television drama Game Change.[24]

In 2013, he appeared in the western thriller Sweetwater,[25] and starred opposite Annette Bening in the romantic drama film The Face of Love.[26] Harris then voiced Mission Control in Alfonso Cuarón's space epic Gravity (2013), starring Sandra Bullock and George Clooney.[27]

In 2015, he portrayed the title character in the film version of the Shakespeare tragedy Cymbeline.[28] In 2016, he appeared alongside Madigan and Taissa Farmiga in The New Group's revival of Sam Shepard's Buried Child, for which he was nominated for the Lucille Lortel Award for Outstanding Lead Actor in a Play.[29][30]

In 2016, he also began playing the villainous Man in Black in HBO's sci fi thriller series Westworld,[31] and had a co-starring role in the ensemble cast of Warren Beatty's romantic comedy drama Rules Don't Apply, with Lily Collins and Alden Ehrenreich. In 2017, he appeared in Dean Devlin's sci-fi film Geostorm, alongside Gerard Butler and Andy García.[32] Harris had been previously set to star in Alejandro González Iñárritu's Starz drama series The One Percent with Hilary Swank and Ed Helms.[33]

Harris married actress Amy Madigan on November 21, 1983, while they were filming Places in the Heart together. They have one daughter, Lily Dolores Harris (born May 3, 1993).[35]

On March 20, 2012, the Screen Actors Guild (SAG) and the American Federation of Television and Radio Artists (AFTRA) merged to form a new union, SAG-AFTRA. Harris, along with others including Edward Asner, Martin Sheen, Valerie Harper, Michael Bell and Wendy Schaal, were opposed to the merger and sued SAG President Ken Howard and several SAG Vice Presidents, seeking to have the merger undone. They were unsuccessful.[36] The lawsuit was dismissed on May 22, 2012.[37]

Harris has a reputation for being serious on the film set. He told a journalist in 2006, "I don't like bullshittin'... so, I guess that comes across as serious."[8] On March 13, 2015, he was honored with a star on the Hollywood Walk of Fame for his work in motion pictures, located at 6712 Hollywood Boulevard.[38][39] Harris received an honorary degree from Muhlenberg College on May 17, 2015.[40]

Harris is one of several actors who have been dubbed "the thinking woman's sex symbol" (others include Hugh Laurie and Denzel Washington).[41]