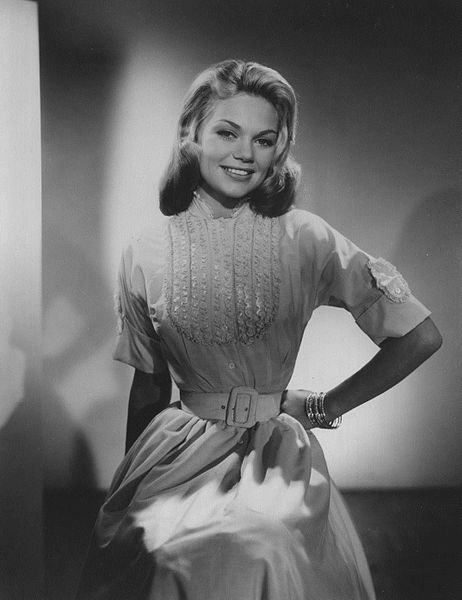 Cannon was born Samille Diane Friesen in Tacoma, Washington, on January 4, 1937, the daughter of housewife Claire (née Portnoy) and life insurance salesman Ben Friesen.[1] She was raised in the Ashkenazi Jewish faith of her mother, who was a Russian immigrant, though her father was Baptist.[2] She attended West Seattle High School and University of Washington. Her younger brother is jazz musician David Friesen.
Read more...

Cannon made her film debut in The Rise and Fall of Legs Diamond (1960). She followed it with This Rebel Breed (1960).

She had a regular role on the short-lived soap opera Full Circle and guest starred on The Untouchables, The Red Skelton Hour, Ripcord, Stoney Burke, Mr. Broadway, The Reporter, Gunsmoke, Burke's Law and Medical Center.

In 1963, Cannon joined the national touring production of the Broadway musical How to Succeed in Business Without Really Trying, in which she played Rosemary.

Cannon had another role in a feature with The Murder Game (1965), then took several years off.

In 1971 she starred in five films: The Love Machine, from the novel by Jacqueline Susann; Doctors' Wives, with Gene Hackman; The Anderson Tapes with Sean Connery; The Burglars, with Jean-Paul Belmondo; and Such Good Friends, for which she received a Golden Globe nomination for Best Actress.

Cannon starred opposite Burt Reynolds in Shamus (1973) as well as the mystery The Last of Sheila, playing an agent based on Sue Mengers that year, and gave a critically acclaimed performance in Child Under a Leaf in 1974.

She starred in the TV movie Virginia Hill (1974) with Harvey Keitel. Following this she took a four-year absence from acting.[3]

Cannon enrolled in the Women's Directing Workshop of the American Film Institute. She wrote, produced and directed a 45-minute film, Number One, which earned an Oscar nomination. It was a story about adolescent sexual curiosity.[4]

In 1978, Cannon co-starred in Revenge of the Pink Panther. That same year, she appeared in Heaven Can Wait, for which she received another Oscar nomination and won a Golden Globe Award for Best Supporting Actress.

In 1976, she hosted Saturday Night Live during its first season and she guest starred in the fourth season of The Muppet Show in 1979.[5]

For her contributions to the film industry, Cannon was inducted into the Hollywood Walk of Fame in 1983 with a motion pictures star located at 6608 Hollywood Boulevard.[7]

In 2005, she appeared in Boynton Beach Club, a movie about aging Floridians who have just lost their spouses.

In 1972, Cannon revealed that she engaged in primal therapy.[10] She is an avid fan of the Los Angeles Lakers and has attended Lakers games for over three decades. She is a devout born-again Christian.[2][11]

Report a problem
Write to Dyan Cannon at FanPal • 2021