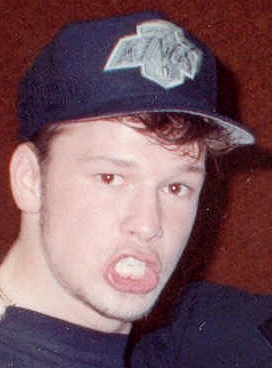 Donald Edmond Wahlberg Jr.[1] (born August 17, 1969) is an American singer, songwriter, actor, record producer, and film producer. He is a founding member of the boy band New Kids on the Block. Outside music, he has had roles in the Saw films, Dreamcatcher, The Sixth Sense, Righteous Kill, and Ransom, as well as appearing in the World War II miniseries Band of Brothers as Carwood Lipton. From 2002 to 2003, he starred in the crime drama Boomtown. He has been starring in the drama series Blue Bloods as Danny Reagan since 2010, and since 2014 is an executive producer of the TNT reality television show Boston's Finest.[2] He was nominated for Choice Scream at the 2006 Teen Choice Awards for his work in the Saw films. He has also produced and starred in Rock this Boat, Donnie Loves Jenny and Return of the Mac on Pop TV. He also produces and stars in Wahlburgers on A&E TV.

Wahlberg was born in the Dorchester neighborhood of Boston. He is the eighth of nine children, with older siblings, Arthur, Jim, Paul, Robert, Tracey, Michelle, and Debbie (died in 2003), and younger brother, Mark, who began his entertainment career formerly as the leader of the early '90s rap group Marky Mark and the Funky Bunch. He also has three half-siblings from his father's first marriage: Donna, Scott, and Buddy. His mother, Alma Elaine (née Donnelly), was a bank clerk and nurse's aide, and his father, Donald Edmond Wahlberg, Sr. (May 8, 1930 - February 14, 2008), was a teamster who worked as a delivery driver; they divorced in 1982.[3][4] His father was of Swedish and Irish descent, and his mother is of Irish, English, and French-Canadian ancestry.[5] Maternally, he is distantly related to author Nathaniel Hawthorne.[6]
Read more...

New Kids on the Block

Main article: New Kids on the Block Wahlberg in February 1990

As a recording artist, Wahlberg is known as an original member of the boy band New Kids on the Block.

Wahlberg's first film acting role was in the 1996 film Bullet with Mickey Rourke and Tupac Shakur. Also in 1996, he appeared as a kidnapper in Ransom with Mel Gibson. He went back to his home town for a starring role in the South Boston-based film Southie. Wahlberg received attention for his role in the 1999 film The Sixth Sense, playing the patient of Bruce Willis's character in the opening sequence.

In 2001, Wahlberg co-starred as Second Lieutenant C. Carwood Lipton in the television miniseries Band of Brothers. He also starred in the 2002-2003 NBC drama series Boomtown as Joel Stevens, a Los Angeles police detective. Graham Yost, executive producer and writer of Boomtown, had worked with him in Band of Brothers and was so impressed by his performance that he wrote the role of Joel Stevens specifically for him.

In 2003, Wahlberg starred alongside Timothy Olyphant, Jason Lee, and his Band of Brothers co-star Damian Lewis as the mentally challenged Duddits in William Goldman and Lawrence Kasdan's adaptation of the Stephen King alien-invasion thriller, Dreamcatcher. In 2005, he starred as Detective Eric Matthews in the second installment of the Saw series. He reprised the role in Saw III in 2006 and Saw IV in 2007, also appearing in Saw V in 2008 via archive footage from the previous films.

In 2006, Wahlberg played Lieutenant Commander Burton in the military/boxing drama Annapolis. In September 2006, he played the lead role in the short-lived television drama Runaway on The CW. The show was cancelled in October 2006 due to poor ratings. In 2007, he starred in the television film Kings of South Beach on A&E. Also in 2007, he starred on the TV series The Kill Point.

In 2008, Wahlberg appeared in Righteous Kill and co-starred in What Doesn't Kill You.

As of 2011, Wahlberg is the host of an internet radio show on Friday nights at 8 pm PST called "DDUB's R&B Back Rub" on Cherry Tree Radio.[8] and appeared in the 2011 comedy Zookeeper.

In 1991, Wahlberg was charged with first-degree arson for setting a fire at a historic hotel in Louisville, Kentucky. Authorities stated that Wahlberg, then known as the "bad boy" of boy band New Kids on the Block, was partying with fellow band member Danny Wood and fans in the early morning hours when Wahlberg dumped vodka on a hallway carpet and set it on fire. Wahlberg was facing up to 20 years in prison, but the charge was later reduced to misdemeanor criminal mischief, and eventually dismissed after Wahlberg agreed to participate in public service videos on fire safety, drug abuse and drunk driving.[9]

Wahlberg is a passionate fan of the Boston Celtics and has been seen attending many of their games. He narrated a documentary called "The Association: Boston Celtics" about the team's 2010-11 season, which aired on ESPN between 2010 and 2011,[16] as well as co-narrating (alongside Ice Cube) the ESPN 30 for 30 documentary Celtics/Lakers: Best of Enemies, about the Celtics' rivalry with the Los Angeles Lakers.[17] He also owns a restaurant in Boston named Wahlburgers with brothers Paul (the restaurant's head chef) and Mark.

In February 2016, Wahlberg endorsed Marco Rubio for President of the United States.[18]

Cast of TV series Blue Bloods at the 2010 Summer Session of the Television Critics Association.