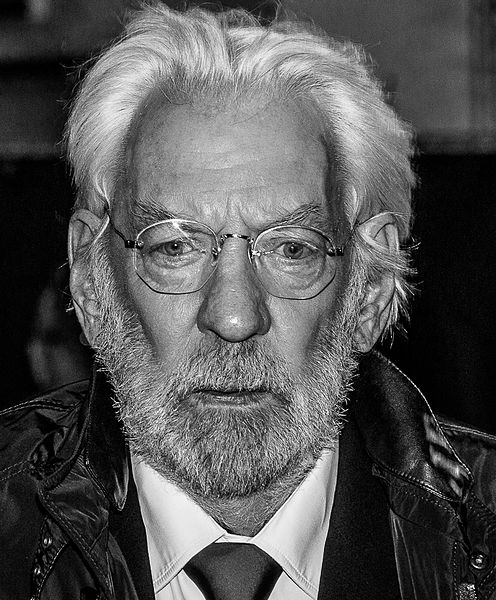 Sutherland has been nominated for eight Golden Globe Awards, winning two for his performances in the television films Citizen X (1995) and Path to War (2002); the former also brought him a Primetime Emmy Award. Inductee of Hollywood Walk of Fame and Canadian Walk of Fame, he also received a Canadian Academy Award for the drama film Threshold (1981). Several media outlets and movie critics describe him as one of the best actors who have never been nominated for an Oscar.[5][6][7] In 2017, he received an Academy Honorary Award for his contributions to cinema.[8]

He is the father of actors Rossif Sutherland, Angus Sutherland and Kiefer Sutherland.

Sutherland was born in Saint John, New Brunswick, the son of Dorothy Isobel (née McNichol; 1892-1956) and Frederick McLea Sutherland (1894-1983), who worked in sales and ran the local gas, electricity and bus company.[2][9] He is of Scottish, German and English ancestry.[10][11] As a child, he had rheumatic fever, hepatitis, and poliomyelitis. His teenage years were spent in Bridgewater, Nova Scotia.[12] He obtained his first part-time job, at the age of 14, as a news correspondent for local radio station CKBW.

Sutherland graduated from Bridgewater High School. He then studied at Victoria University, an affiliated college of the University of Toronto, where he met his first wife Lois Hardwick (not to be confused with the child star of the same name), and graduated with a double major in engineering and drama. He had at one point been a member of the "UC Follies" comedy troupe in Toronto. He changed his mind about becoming an engineer, and left Canada for Britain in 1957,[13] studying at the London Academy of Music and Dramatic Art.

After quitting the London Academy of Music and Dramatic Art (LAMDA), Sutherland spent a year and a half at the Perth Repertory Theatre in Scotland.[14] In the early to mid-1960s, Sutherland began to gain small roles in British films and TV (such as a hotel receptionist in The Sentimental Agent episode 'A Very Desirable Plot' (1963)). He featured alongside Christopher Lee in horror films such as Castle of the Living Dead (1964) and Dr. Terror's House of Horrors (1965). He also had a supporting role in the Hammer Films production Die! Die! My Darling! (1965), with Tallulah Bankhead and Stefanie Powers. In the same year, he appeared in the Cold War classic The Bedford Incident and appeared in the TV series The Saint, in the 1965 episode "The Happy Suicide",[15] and in the TV series Gideon's Way, in the 1966 episode "The Millionaire's Daughter". In 1966, Sutherland appeared in the BBC TV play Lee Oswald-Assassin, playing a friend of Lee Harvey Oswald, Charles Givens (even though Givens himself was an African-American).

In 1967, he appeared in "The Superlative Seven," an episode of The Avengers. He also made a second, and more substantial appearance in The Saint. The episode, "Escape Route," was directed by the show's star, Roger Moore, who later recalled that Sutherland "asked me if he could show it to some producers as he was up for an important role... they came to view a rough cut and he got The Dirty Dozen."[16] The film, which starred Lee Marvin and Charles Bronson, was the 5th highest-grossing film of 1967 and MGM's highest-grossing movie of the year.[17]

In 1968, after the breakthrough in the UK-filmed The Dirty Dozen, Sutherland left London for Hollywood.[13] He then appeared in two war films, playing the lead role as "Hawkeye" Pierce in Robert Altman's MASH in 1970; and, again in 1970, as hippie tank commander "Oddball" in Kelly's Heroes.

Sutherland starred with Gene Wilder in the 1970 comedy Start the Revolution Without Me. During the filming of the Academy Award-winning detective thriller Klute, Sutherland had an intimate relationship with co-star Jane Fonda.[18] Sutherland and Fonda went on to co-produce and star together in the anti-Vietnam War documentary F.T.A. (1972), consisting of a series of sketches performed outside army bases in the Pacific Rim and interviews with American troops who were then on active service. A follow up to their teaming up in Klute, Sutherland and Fonda performed together in Steelyard Blues (1973), a "freewheeling, Age-of-Aquarius, romp-and-roll caper" from the writer David S. Ward.[19]

The 1973 thriller Don't Look Now was shot in Venice. Both Sutherland and co-star Julie Christie were praised for their performances.

Sutherland found himself as a leading man throughout the 1970s in films such as the Venice-based psychological horror film Don't Look Now (1973), co-starring Julie Christie, a role which saw him nominated for the BAFTA Award for Best Actor, the war film The Eagle Has Landed (1976), Federico Fellini's Casanova (1976) and the thriller Eye of the Needle (which was filmed on location on the Isle of Mull, West Scotland). His role as Corpse of Lt. Robert Schmied in the Maximilian Schell's 1976 German film-directed End of the Game is listed in crazy credits. and as the ever-optimistic health inspector in the science fiction/horror film Invasion of the Body Snatchers (1978) alongside Brooke Adams and Jeff Goldblum.

He helped launch the internationally popular Canadian television series Witness to Yesterday, with a performance as the Montreal doctor Norman Bethune, a physician and humanitarian, largely talking of Bethune's experiences in revolutionary China.[20] Sutherland also had a role as pot-smoking Professor Dave Jennings in National Lampoon's Animal House in 1978, making himself known to younger fans as a result of the movie's popularity. When cast, he was offered either $40,000 up front or two percent of the movie's gross earnings. Thinking the movie would certainly not be a big success, he chose the 40K upfront payment. The movie eventually grossed $141.6 million.[21]

He won acclaim for his performance in the Italian director Bernardo Bertolucci's 1976 epic film 1900 and as the conflicted father in the Academy Award-winning family drama Ordinary People (1980), alongside Mary Tyler Moore and Timothy Hutton. In 1981, he narrated A War Story, an Anne Wheeler film. He played the role of physician-hero Norman Bethune in two biographical films in 1977 and 1990.

Some of Sutherland's better known roles in the 1980s and 1990s were in the South African apartheid drama A Dry White Season (1989), alongside Marlon Brando and Susan Sarandon; as a sadistic warden in Lock Up (1989) with Sylvester Stallone; as an incarcerated pyromaniac in the firefighter thriller Backdraft (1990) alongside Kurt Russell and Robert De Niro, as the humanitarian doctor-activist Norman Bethune in 1990’s Bethune: The Making of a Hero, and as a snobbish New York City art dealer in Six Degrees of Separation (1993), with Stockard Channing and Will Smith.

In the 1991 Oliver Stone film JFK, he played a mysterious Washington intelligence officer, reputed to have been L. Fletcher Prouty, who spoke of links to the military-industrial complex in the assassination of U.S. President John F. Kennedy.[22] He played psychiatrist and visionary Wilhelm Reich in the video for Kate Bush's 1985 single, "Cloudbusting".

In 1992, he played the role of Merrick in the movie Buffy the Vampire Slayer, with Kristy Swanson. In 1994, he played the head of a government agency hunting for aliens that take over people's bodies similar to the premise of Invasion of the Body Snatchers in the movie of Robert A. Heinlein's 1951 book The Puppet Masters.

In 1994, Sutherland played a software company's scheming CEO in Barry Levinson's drama Disclosure opposite Michael Douglas and Demi Moore, and in 1995 was cast as Maj. Gen. Donald McClintock in Wolfgang Petersen's Outbreak. He was later cast in 1996 (for only the second time) with his son Kiefer in Joel Schumacher's A Time to Kill.

Sutherland played famous American Civil War General P.G.T. Beauregard in the 1999 film The Hunley. He played an astronaut in Space Cowboys (2000), with co-stars Clint Eastwood, Tommy Lee Jones and James Garner. Sutherland was a model for Chris Claremont and John Byrne to create Donald Pierce, the character in the Marvel Comics, which the last name comes from Sutherland's character in the 1970 film's M*A*S*H, Hawkeye Pierce.

In more recent years, Sutherland was known for his role as Reverend Monroe in the Civil War drama Cold Mountain (2003), in the remake of The Italian Job (2003), in the TV series Commander in Chief (2005-2006), in the movie Fierce People (2005) with Diane Lane and Anton Yelchin, and as Mr. Bennet in Pride & Prejudice (2005), starring alongside Keira Knightley.

Sutherland starred as Tripp Darling in the prime time drama series Dirty Sexy Money for ABC. He played multi-millionaire Nigel Honeycut in the 2008 film Fool's Gold. His distinctive voice has also been used in many radio and television commercials, including those for Delta Air Lines, Volvo automobiles, and Simply Orange orange juice.

Sutherland provided voice-overs and narration during the intro of the 1st semifinal of Eurovision Song Contest 2009, and the Opening Ceremony of the 2010 Winter Olympics in Vancouver, and was also one of the Olympic flag bearers. He was also narrator of CTV's "I Believe" television ads in the lead up to the Games. During the games, Sutherland attended some of the events. In 2010, he starred alongside an ensemble cast in a TV adaptation of Ken Follett's novel The Pillars of the Earth.

On 26 March 2012, he was a guest on the Opie and Anthony radio show. During his appearance to promote the first Hunger Games film, he mentioned that instead of accepting 2% of the gross revenue of Animal House he insisted on being paid a day's salary instead which amounted to $50,000, instead of the $2.8 million he would have earned had he accepted the offer made by Universal Studios. He also mentioned that he had been offered the lead roles in Deliverance and Straw Dogs but turned both offers down because he did not want to appear in violent films at the time. The role in Deliverance went to Jon Voight and the role in Straw Dogs to Dustin Hoffman, and both films enjoyed critical and box office success. After declining these violent roles, he quipped: "and then I played a fascist in 1900 by Bernardo Bertolucci." The television show Crossing Lines premiered on 23 June 2013, on the US network NBC.[23] Sutherland, who played the Chief Prosecutor for the International Criminal Court named Michel Dorn, was one of only two actors to appear in all episodes across three seasons.[24]

In 2016, he was a member of the main competition jury of the 2016 Cannes Film Festival.[25] On 6 September 2017, it was announced that Sutherland, along with 3 other recipients, will receive an Honorary Oscar, from Academy of Motion Picture Arts and Sciences, Sutherland's first Academy Award in six decades.[26]

Sutherland has been married three times. His first marriage, to Lois Hardwick, lasted from 1959 to 1966. His second marriage, which lasted from 1966 to 1970, was to Shirley Douglas, daughter of Canadian social democratic politician and the "father" of Canada's universal healthcare system, Tommy Douglas.[30] Sutherland and Douglas have two children, twins Kiefer, an actor known for his role as Jack Bauer on the TV action/thriller series 24 and currently starring in the ABC political drama Designated Survivor, and Rachel.

His four sons have all been named after directors whom Sutherland has worked with: Kiefer is named after American-born director and writer Warren Kiefer, who, under the assumed name of Lorenzo Sabatini,[31] directed Sutherland in his very first feature film, the Italian low-budget horror film Il castello dei morti vivi (Castle of the Living Dead); Roeg is named after director Nicolas Roeg; Rossif is named after French director Frédéric Rossif; and Angus Redford has his middle name after Robert Redford.[30]

Sutherland became a blogger for the American news website The Huffington Post during the 2008 United States presidential election campaign.[32] In his blogs, he stated his support for Barack Obama.[33]