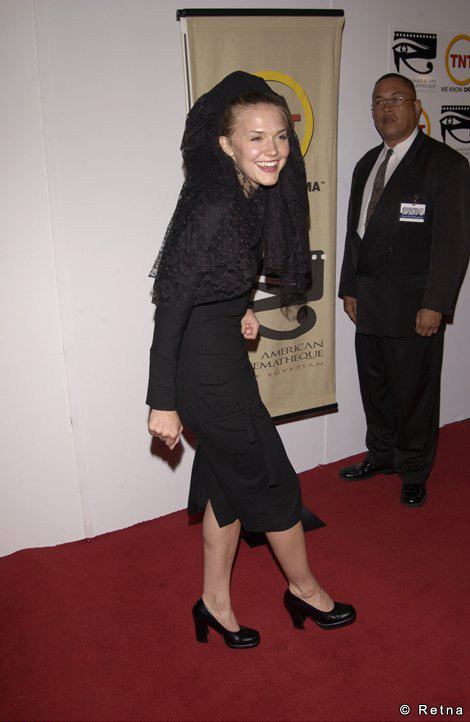 Dominique Swain (born August 12, 1980) is an American actress and producer. She is best known for her roles as the title character in the 1997 film adaptation of Lolita, and as Sean Archer's daughter, Jamie, in the action-thriller Face/Off (1997). She worked predominantly in independent films throughout the late 90s and early 2000s. Her other credits include Girl (1998), Happy Campers (2001), Tart (2001), Pumpkin (2002), and Alpha Dog (2006). She has since starred in a succession of horror films. In 2002, she appeared in the music video for the Moby song "We Are All Made of Stars".

Swain was born on August 12, 1980 in Malibu, California, the daughter of Cindy (née Fitzgerald) and David Swain, Sr., an electrical engineer.[1] She has two sisters, Chelsea (born 1982/1983) and Alexis (born 1978/1979), and a step-sister and brother from her father's first marriage. Swain grew up in Malibu where she attended Malibu High School, and enjoyed playing sports, making art, and listening to music. Swain excelled at learning, earning straight A's and becoming Valedictorian like her sister before her. Her parents are separated.[2]
Read more...

Swain started her career in Hollywood as a stunt double; she appeared as the double for Macaulay Culkin's younger sister Quinn in Joseph Ruben's The Good Son (1993). In 1995, at the age of 15, she was chosen out of 2,500 girls to play the title role of Dolores "Lolita" Haze in Adrian Lyne's controversial 1997 screen adaptation of Lolita. She was 15 during filming and her performance was praised by critics. She later then played the rebellious teen Jamie Archer in John Woo's Face/Off (1997).[3][4][5] She starred in the 1998 drama film Girl, in which she plays a high-schooler who is determined to lose her virginity. She then played a central role in the 2006 film Alpha Dog.[6] In 2009, Swain appeared in Starz Inside: Sex and the Cinema which discussed the depiction of sex in film.[7] That same year, she was featured in the movie Noble Things, about the country star Jimmy Wayne Collins, which also starred country musician Lee Ann Womack.[8] Swain also starred in the horror/slasher film Fall Down Dead as the main character, Christie Wallace.[9] She starred in Monte Hellman's romance thriller Road to Nowhere in 2010.[10] In 2011, Swain was featured in David Ren's action thriller The Girl from the Naked Eye.[11] She starred in the direct-to-video science fiction film Nazis at the Center of the Earth in 2012.[12] In 2013, Swain starred in Gregory Hatanaka's drama film Blue Dream as Gena Townsend.[13] In 2015 she was in the independent action film Skin Traffik alongside Mickey Rourke, Daryl Hannah, Eric Roberts and Michael Madsen,[14]

Currently, Swain is set to star in the slasher film The 6th Friend.[15]