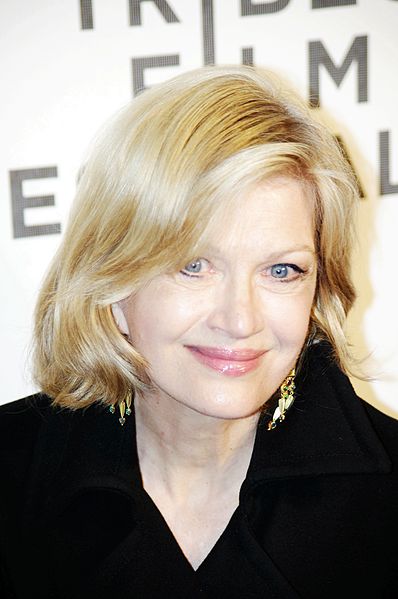 Sawyer has been the anchor of ABC News's nightly flagship program ABC World News, a co-anchor of ABC News's morning news program Good Morning America and Primetime newsmagazine. Early in her career, she was a member of U.S. President Richard Nixon's White House staff and closely associated with the president himself.

Sawyer was born in Glasgow, Kentucky,[1] to Jean W. (née Dunagan), an elementary school teacher, and Erbon Powers "Tom" Sawyer, a county judge.[2] Her ancestry includes English, Irish, Scots-Irish, and German.[3] Soon after her birth, her family moved to Louisville, where her father rose to local prominence as a Republican politician and community leader. He was Kentucky's Jefferson County Judge/Executive when he was killed in a car accident on Louisville's Interstate 64 in 1969. E. P. "Tom" Sawyer State Park, in the Frey's Hill area of Louisville, is named in his honor.

Sawyer attended Seneca High School in the Buechel area of Louisville. She served as an editor-in-chief for her school newspaper, The Arrow, and participated in many artistic activities. She always felt, however, that she was in the shadow of her older sister, Linda.[citation needed] Insecure and something of a loner as a teen, Diane found happiness, she later said, going off by herself or with a group of friends that called themselves "reincarnated transcendentalist" and read Emerson and Thoreau down by a creek.[citation needed] In her senior year of high school, in 1963, she won first place in the annual national America's Junior Miss scholarship pageant as a representative from the Commonwealth of Kentucky. She won by her strength of poise in the final interview and her essay comparing the music of the North and the South during the Civil War.[4] From 1962 to 1965, Sawyer was America's Junior Miss, touring the country to promote the Coca-Cola Pavilion at the 1964-1965 New York World's Fair. At first, she thought that travelling around the country as America's Junior Miss would be a terrifying experience, but it taught her to think on her feet and do so with poise and grace.[4]

In 1967, she received a Bachelor of Arts degree with a major in English from Wellesley College in Wellesley, Massachusetts. She was a member of the Wellesley College Blue Notes, an a cappella-singing group, and Phi Sigma Lecture Society. She attended one semester of law school at the University of Louisville before turning to journalism.

Sawyer with President Richard Nixon in 1972

Immediately after her graduation, Sawyer returned to Kentucky and was employed as weather forecaster for WLKY-TV in Louisville. In Sawyer's opinion, the weather was boring, so she would occasionally add quotes to keep it interesting. Finally, Sawyer was promoted to a general-assignment post, but this did not sustain her interest for long. In 1970, Sawyer moved to Washington, D.C., and, unable to find work as a broadcast journalist, she interviewed for positions in government offices. She eventually became an assistant to Jerry Warren, the White House deputy press secretary. Initially, Sawyer wrote press releases and quickly graduated to other tasks like drafting some of President Richard Nixon's public statements. Within a few months, she became an administrative assistant to White House Press Secretary Ron Ziegler and eventually rose to become a staff assistant for U.S. President Richard Nixon.[5] In 1973 when John Dean testified to the Senate Watergate Committee concerning Nixon's involvement in the Watergate coverup, Sawyer and Larry Speakes were assigned to the staff of Nixon's lawyer J. Fred Buzhardt in an effort to "prove" that Dean was lying. Speakes later claimed that he had come to the conclusion that Dean had not lied, and that he informed Sawyer, but they continued their efforts.[6]

Sawyer continued through Nixon's resignation from the presidency in 1974 and worked on the Nixon-Ford transition team in 1974-1975, after which she decamped with Nixon to California and helped him write RN: The Memoirs of Richard Nixon, published in 1978. She also helped prepare Nixon for his famous set of television interviews with journalist David Frost in 1977.[7]

Years later, Sawyer would be suspected of being Deep Throat, the source of leaks of classified information to journalist Bob Woodward during the Watergate scandal. In 2005, Deep Throat was identified as W. Mark Felt, but prior to that, Rabbi Baruch Korff - a longtime Nixon confidant and defender known as "Nixon's rabbi" - said on his deathbed that he believed Sawyer was Deep Throat. Sawyer laughed it off and became one of six people to request and receive a public denial from Woodward.[8][9]

When Sawyer came back to Washington, D.C., in 1978, she joined CBS News as a general-assignment reporter. She was promoted to political correspondent in February 1980 and featured on the weekday broadcasts of Morning with Charles Kuralt. When CBS expanded its morning news show from 60 to 90 minutes, Sawyer was announced as co-anchor on May 13, 1981, by the president of CBS News. With her debut on September 28, 1981, she put her own stamp on the broadcast.[4] The ratings for the show were boosted upon Sawyer's arrival, but the improvement did not last, and, after Kuralt left the show, he was replaced by Bill Kurtis. The ratings decreased further, and Sawyer asked to be reassigned in 1984.[5] From 1982 to 1984, Sawyer was also seen with Kurtis on the CBS Early Morning News airing an hour earlier on most CBS affiliates.

In 1984, she became the first female correspondent on 60 Minutes, a CBS News investigative-television newsmagazine. During Sawyer's five years with 60 Minutes, the program regularly ranked among the top-five most-watched in the country.[5]

In 1989, she moved to ABC News to co-anchor Primetime Live newsmagazine with Sam Donaldson. From 1998 to 2000, she co-anchored ABC's 20/20, also a newsmagazine, broadcast on Wednesdays with Donaldson and on Sundays with Barbara Walters.

On January 18, 1999, Sawyer returned to morning news as the co-anchor of Good Morning America with Charles Gibson. The assignment was putatively temporary, but her success in the position, measured by a close in the gap with front-runner Today, NBC News' morning program, sustained her in the position for nearly eleven years.

In 2000, Sawyer returned as co-anchor of Primetime newsmagazine now called Primetime Thursday, with Gibson replacing Donaldson. Sawyer was the first to announce to the Good Morning America viewers that the first plane crashed into the World Trade Center on September 11, 2001. In 2004, when the show's title was changed to its original name, Primetime Live, a new executive producer was hired, and the newsmagazine format was changed to investigative reporting with Sawyer rotating as the co-anchor with Chris Cuomo, Cynthia McFadden, and John Quiñones.[10] In 2005, the show was retitled Primetime, and Sawyer left the show at the end of 2006 when its format again changed, with a sub-series focus.

On September 2, 2009, Sawyer was announced as the successor to Gibson, who retired as the anchor of ABC World News, on Friday, December 18, 2009. Sawyer left GMA on December 11, 2009, and was scheduled to become the ABC World News anchor in January 2010. However, on December 1, 2009, The New York Times reported that, instead of moving to ABC World News in January 2010, Sawyer would start on December 21, 2009, three days after Gibson's departure.[11] For over a year (2010-2011), with Katie Couric as then anchor of CBS Evening News, two of the three network news anchors on broadcast television were women.[12] Ratings initially rose 8% after Sawyer's first four weeks, averaging 8.8 million viewers.[13]

She signed off at the end of her nightly broadcast with "I'll see you right back here tomorrow night." The show, like the competing evening newscasts, ended the year with ratings 14% below that of the preceding year. Until 2014 she was the anchor of ABC's flagship broadcast World News and the network's principal anchor for breaking-news coverage, election coverage, and special events.[14]

On June 25, 2014, it was announced that she would step down from the anchor chair at ABC World News in September 2014. She will remain with ABC News and will focus on creating specials and conducting high-profile interviews.[15]

Sawyer was in relationships with Frank Gannon, aide to President Richard Nixon, as well as American diplomat Richard Holbrooke.[23]

On April 29, 1988, she married film and theatre director, producer, and actor Mike Nichols. They had no children. Nichols had two daughters and a son from previous marriages. He died on November 19, 2014, at the age of 83.

The "List of The World's 100 Most Powerful Women" in Forbes magazine reported that, between June 2005 and June 2008, Sawyer made approximately $12 million,[18] solely from entertainment income.

Report a problem
Write to Diane Sawyer at FanPal • 2023