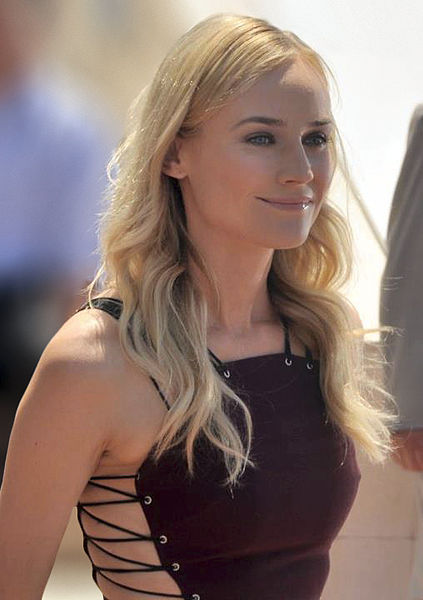 She is known for roles such as Helen in the epic war film Troy (2004), Dr. Abigail Chase in the heist film National Treasure (2004) and its sequel (2007), Bridget von Hammersmark in Quentin Tarantino's war film Inglourious Basterds (2009), and Gina in the psychological thriller film Unknown (2011). She also starred as Detective Sonya Cross in the FX crime drama series The Bridge (2013-14).

Kruger was born as Diane Heidkrüger on 15 July 1976 in Algermissen, West Germany, near Hildesheim, the daughter of computer specialist Hans-Heinrich Heidkrüger, and his wife, Maria-Theresa, a bank employee.[2] She was brought up Roman Catholic[3] and attended Catholic school.[4] She has stated that one of her grandmothers was Polish.[5]

She was brought up in Germany with her younger brother, Stefan. Her mother sent her to student exchange programmes when she was a teenager to improve her English.[6] As a child, Kruger wanted to become a ballerina[7] and successfully auditioned for the Royal Ballet School in London. Later, Kruger moved to Paris and turned her energy toward modelling and learning French.

Kruger at the 2009 Venice Film Festival

In 1992, Kruger represented Germany in the Elite Model Look[8] and started modelling afterwards. Despite her relatively short stature for a model, she managed to land bookings such as advertisements from Yves Saint Laurent, Chanel, Salvatore Ferragamo, Giorgio Armani, Jil Sander, Christian Dior, Burberry and Louis Vuitton; runway shows from Marc Jacobs, D&G and Sonia Rykiel as well as appearances on the cover of Vogue Paris, Marie Claire and Cosmopolitan to her modeling repertoire.[1] She gradually stopped modelling after deciding to pursue a career in acting.

Kruger became interested in acting and took lessons at the Cours Florent. She made her film debut in 2002, opposite Dennis Hopper and Christopher Lambert in The Piano Player, a TV film by Jean-Pierre Roux. The same year, she also starred in her then husband's directorial début Mon Idole.

She played Julie Wood in 2003's Michel Valliant and Lisa in Wicker Park (2004), alongside Josh Hartnett and Rose Byrne. One of her more high-profile roles to date is her portrayal of Helen of Sparta in Wolfgang Petersen's epic Troy. She was ranked 50th on the Maxim Hot 100 Women of 2005.[9] In 2004, Kruger starred with Nicolas Cage and Sean Bean (who co-starred with her in Troy) in the film National Treasure, going on to appear in films Joyeux Noël (2005) and Copying Beethoven (2006). She reprised her role as Dr. Abigail Chase in National Treasure: Book of Secrets, released in December 2007.

Kruger at the 2012 Berlin Film Festival

Kruger was the hostess of the opening and closing ceremonies of the 2007 Cannes Film Festival.[10] Kruger was a jury member of the 58th Berlin International Film Festival in 2008. The festival is chaired by Costa Gavras.

In 2009, she co-starred as a German actress turned Allied spy in Quentin Tarantino's film Inglourious Basterds. In December 2009, she announced the nominations of the 67th Golden Globe Awards and also picked up nominations from the Screen Actors' Guild for Best Supporting Actress and Outstanding Performance by a Cast of a Motion Picture for her role in Inglourious Basterds.[11]

Kruger played Anna in Jaco Van Dormael's Mr. Nobody. Critical response has praised the film's artistry and Kruger's acting.[12] Kruger made a cameo appearance in an April 2010 episode of the Fox show Fringe, in which her former boyfriend, actor Joshua Jackson, starred. In 2010, Kruger also appeared in Mark Ronson's music video for "Somebody to Love Me", where she plays Boy George.

Kruger is a brand ambassador for Swiss watch manufacturer Jaeger-LeCoultre.[18] In December 2009, she was announced as the global "spokesmodel" of L'Oréal.[19] It was announced in May 2010 that she would become the latest face for Calvin Klein's newest fragrance line, Beauty.[20]

She is a friend of fashion designer Karl Lagerfeld.[23]