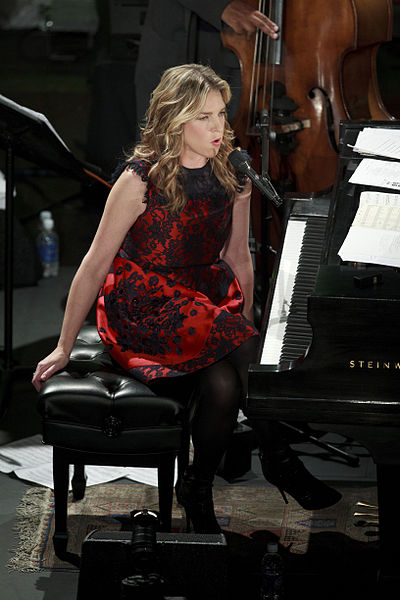 Diana Jean Krall, OC, OBC (born November 16, 1964) is a Canadian jazz pianist and singer, known for her contralto vocals.[1] She has sold more than 6 million albums in the US and over 15 million albums worldwide. On December 11, 2009, Billboard magazine named her the second Jazz Artist of the Decade (2000-09), establishing her as one of the best-selling artists of her time.

Krall is the only jazz singer to have had eight albums debuting at the top of the Billboard Jazz Albums.[2] To date, she has won three Grammy Awards and eight Juno Awards. She has also earned nine gold, three platinum, and seven multi-platinum albums.

Krall was born on November 16, 1964, in Nanaimo, British Columbia, Canada, the daughter of Adella A. (née Wende), an elementary school teacher, and Stephen James "Jim" Krall, an accountant.[3][4][5] Krall's only sibling, Michelle, is a former member of the Royal Canadian Mounted Police (RCMP). Krall's father played piano at home and her mother sang in a community choir. Krall began studying piano herself at the age of four,[6] and took exams through The Royal Conservatory of Music.[7] In high school she was a member of a student jazz group; at 15, she began playing professionally in local restaurants.[8] Krall won a scholarship to attend the Berklee College of Music in Boston, where she studied from 1981 to 1983,[9] before going to Los Angeles to play jazz. She returned to Canada to release her first album in 1993.[10]

Krall's mother died of multiple myeloma in 2002, within months of the deaths of Krall's mentors Ray Brown and Rosemary Clooney.

In 1993, Krall released her first album, Stepping Out, which she recorded with John Clayton and Jeff Hamilton. It caught the attention of producer Tommy LiPuma, who produced her second album, Only Trust Your Heart (1995).

Her third album, All for You: A Dedication to the Nat King Cole Trio (1996), was nominated for a Grammy and continued for 70 weeks in the Billboard jazz charts. Love Scenes (1997) quickly became a hit record with the trio of Krall, Russell Malone (guitar) and Christian McBride (bass).

In August 2000, Krall paired with Tony Bennett for a 20-city tour. They paired again for a song on the TV series Spectacle: Elvis Costello with...

Orchestral arrangements by Johnny Mandel provided the background for the album When I Look In Your Eyes (1999). The band mix was kept, following arrangements on The Look of Love (2001) created by Claus Ogerman; this record achieved platinum status and reached the top 10 of the Billboard 200. The title track from the album, a cover of the Casino Royale standard popularized in the late 1960s by Dusty Springfield and Sérgio Mendes, reached number 22 on the adult contemporary chart.

In September 2001, Krall began a world tour. Her concert at the Paris Olympia was recorded and released as her first live record, Diana Krall - Live in Paris. The album included covers of Billy Joel's "Just The Way You Are" (a hit on U.S. smooth jazz radio) and Joni Mitchell's "A Case Of You".

The 2001 movie "The Score" (US and Germany), starring Robert De Niro and Marlon Brando, featured a recording of Krall's entitled: "I'll Make It Up As I Go." This song accompanies the film's ending credits (chapter 12) and was composed by fellow Canadian, David Foster.[13]

After marrying Costello, Krall worked with him as a lyricist and began to compose her own songs, resulting in the album The Girl in the Other Room. The album, released in April 2004, quickly rose to the top five in the United Kingdom and made the Australian top 40 album charts.

She also joined Ray Charles on his Genius Loves Company album in 2004 for the song "You Don't Know Me."

Live at The Paramount Theater in Charlottesville, Virginia

In late May 2007, Krall was featured in a Lexus ad campaign.[14] That year she also sang "Dream a Little Dream of Me" with piano accompaniment by pianist Hank Jones.

In 2011, Krall went on a private retreat to Sri Lanka. In September 2012, she accompanied Paul McCartney at Capitol Studios in a live performance of his album Kisses on the Bottom, which was shown live on the internet. On September 13, 2012, Krall performed "Fly Me to the Moon" at astronaut Neil Armstrong's memorial service in Washington, D.C.

Glad Rag Doll was released on October 2, 2012. Wallflower is her 12th studio album, released on February 3, 2015 by Verve Records.[16] The album was produced by David Foster.[17] Among the composers Krall and Foster tackled were the Eagles (two songs), Elton John and Bernie Taupin ("Sorry Seems to Be the Hardest Word"), 10cc ("I'm Not in Love"), Neil Finn ("Don't Dream It's Over"), and Gilbert O'Sullivan ("Alone Again (Naturally)"). The title track is from Bob Dylan's "Bootleg Series." And Paul McCartney gave her his blessing to record a previously unreleased original he'd written for his own jazz-flavored Kisses on the Bottom.[18]

On May 5, 2017, Krall released her thirteenth album, Turn Up the Quiet, through Verve Records. The album was produced by Krall and Tommy LiPuma.[19] The album won a Juno Award as vocal jazz album of the year in 2018.[20]

On September 14, 2018, a joint album between Krall and Tony Bennett, Love Is Here to Stay, was released.[21] The album features the song "Fascinating Rhythm," originally recorded by Bennett in 1949, which earned him a Guinness World Record for the "longest time between the release of an original recording and a re-recording of the same single by the same artist" — 68 years and 342 days.[22]

She is an honorary board member of the Multiple Myeloma Research Foundation.[28]

Krall has been selected as a Steinway & Sons Artist and performs exclusively with Steinway pianos in recording sessions, concerts, and public appearances.