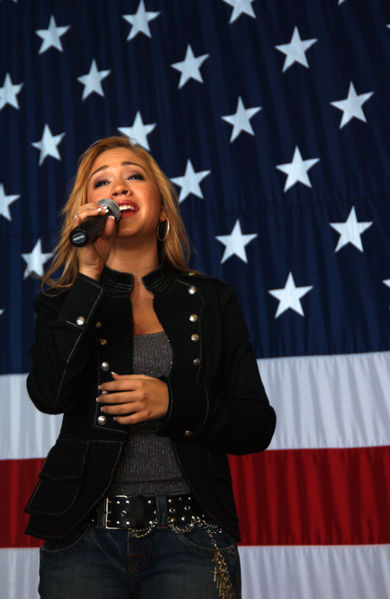 Diana Nicole DeGarmo (born June 16, 1987)[2] is an American singer/songwriter and actress. She rose to fame in 2004 as the runner-up of the third season of American Idol, releasing her debut studio album, Blue Skies, later that year. The following year, DeGarmo ventured into a career in musical theatre. She has starred in two Broadway, one off-Broadway and three national tours. She made her television acting debut in a six-month arc as Angelina Veneziano on The Young and the Restless. DeGarmo has since released two extended plays, Unplugged in Nashville (2009) and Live to Love (2012). She is married to fifth season American Idol finalist Ace Young.[3]

Diana DeGarmo was born in Birmingham, Alabama, but was raised primarily in Snellville, Georgia. DeGarmo began singing at a young age, including the 1997 Georgia Music Hall of Fame Awards, and in Atlanta-based stage productions of Annie and Joseph and the Amazing Technicolor Dreamcoat. At age ten she was part of the Cartoon Gang on The Cartoon Network, appearing in various bumper segments. As a third grader she was a Coca-Cola Kid during the 1996 Summer Olympics in Atlanta, Georgia. The next year she sang at Opryland USA during the Christmas season. In 2002, she was named Miss Georgia Teen and was also a finalist on the NBC talent search program America's Most Talented Kid.
Read more...

During her American Idol run she never fell to the bottom 2. She became one of the front runners by week 6. She was 16 years old at the time she competed. She performed around the country with the rest of the season 3 Top 10 contestants during the summer of 2004.

DeGarmo was signed to RCA Records shortly after the Idol finale and released her single, "Dreams," on June 29, 2004. The single reached number 2 in Canada and number 14 on the Billboard Hot 100 chart. The single also included her version of "I Believe" and a remake of Melissa Manchester's "Don't Cry Out Loud". She recorded her debut album in between Idol summer tour stops.

DeGarmo's debut album, titled Blue Skies, was released on December 7, 2004, to opening week sales of 47,000. The album debuted at number 52 on the Billboard 200 and included songs written by future American Idol judge Kara DioGuardi, as well as Desmond Child, Adam Shankman, and Andreas Carlsson, among others. As of fall 2008, the album had sold 168,000 copies with little to no advertising.[5] The lone single from the CD, "Emotional", was released to radio in November 2004, peaking at number 54 on the Mediabase Pop Chart. She toured independently in the spring and summer of 2005 in support of Blue Skies. During the same time she recorded a song for the soundtrack of the Disney movie Ice Princess. "Reaching for Heaven", written by Desmond Child, can be heard during the climactic ice skating scene in the movie.[6] In June 2005, RCA and DeGarmo parted ways. On September 17, 2005, DeGarmo received the Horizon Award at the Georgia Music Hall Of Fame Awards ceremony; the award recognizes Georgia artists on the path to successful and lengthy careers.

DeGarmo began recording a pop/R&B album in 2007;[7] however, she backed out of the project to return to her country music roots.[8] After filming CMT's Gone Country in late 2007, she relocated to Nashville. She signed to John Rich's production company and recorded material with him in 2008. The songs were never released and DeGarmo moved on to other collaborators.[9] In February 2009 she self-released a four-song acoustic country EP, Unplugged in Nashville, to digital retailers.

In March 2012, DeGarmo wrote "Good Goodbye" for use with her character on The Young and the Restless. It was released to iTunes and was included on her May 2012 EP Live to Love. After producing a music video for "Good Goodbye," fans were asked to vote on two versions of the video on the American Idol website.[10] The winning video became available on iTunes.

DeGarmo made her major stage debut as Maria in an American Musical Theatre of San Jose production of West Side Story in November 2005. She followed with her Broadway debut in a four-month run of Hairspray as nerdy Penny Pingleton taking over for Tracy Miller in February 2006. She also performed the lead role of Brooklyn, originated by Eden Espinosa, in the 2006 national tour of Brooklyn: The Musical alongside one of her idols, Melba Moore. DeGarmo returned to Hairspray for a second engagement from September 2006 to February 2007. She made her Carnegie Hall debut in April 2007 at a tribute to Neil Sedaka.

In 2008, DeGarmo was set to star alongside Tony Award winner Gavin Creel in the Broadway revival of Godspell at the Ethel Barrymore Theatre, but on August 19, it was announced that the show was postponed indefinitely due to the loss of an investor.[11]

In May 2009, DeGarmo starred in the musical revue Back to Bacharach and David, which featured the songs of Burt Bacharach and Hal David. The Kathy Najimy created and produced show played a limited two-week engagement in Los Angeles at the Music Box Theater on Hollywood Boulevard.[12] In July 2009, she starred as the narrator in the Oklahoma Lyric's Theatre production of Joseph and the Amazing Technicolor Dreamcoat alongside Idol alum Anthony Federov.[13] Her next role saw her return to New York City when she debuted in August 2009 as Sarah, the "sexy, blind librarian" and love interest of Toxie, in the off-Broadway musical The Toxic Avenger.[14] The show was housed at New World Stages. DeGarmo remained with Avenger until it closed on January 3, 2010.

DeGarmo made her return to Broadway, starring as Sheila in the Broadway company of Hair where she met her future husband, Ace Young. She succeeded original cast member Caissie Levy beginning March 9, 2010.[15] She played Sheila until the show's closure on June 27, 2010.

DeGarmo played the role of Doralee Rhodes in the national tour of 9 to 5, which was launched in Nashville on September 21, 2010.[16] She ended her run as Doralee after the July 2011 Minneapolis tour stop.

DeGarmo appeared on musical theatre composer Scott Alan's third album, What I Wanna Be When I Grow Up with the song "I Wish", released November 1, 2010.

She reprised the role of Penny Pingleton in the Hollywood Bowl production of Hairspray, which ran from August 5-7, 2011.[17]

DeGarmo has done several readings for new musicals over the years, starting with In Your Dreams in early October 2006. In 2009, she played the title role in a concert for Liberty: A New Musical at the New York Musical Theatre Festival (NYMF) and in 2009 played the role of Chris in the much anticipated reading of an updated Carrie: The Musical. In 2011 and again in 2013 she played Fern/Vylette in Manhattan industry readings of "Jawbreaker," a musical based on the 1990s movie of the same name.[18]

In January 2013, DeGarmo played "Sally" in the pre-Broadway run of the new musical "NERDS," in Raleigh, NC, for the North Carolina Theatre.[19]

DeGarmo played The Narrator in the national tour of Andrew Lloyd Webber's musical Joseph and the Amazing Technicolor Dreamcoat from March 4, 2014 to April 2015.[20]

In June 2015, DeGarmo starred as Dorothy in Studio Tenn's production of The Wizard of Oz at The Schermerhorn Symphony Theater in Nashville, Tennessee.[21]

DeGarmo joined the cast of The Young and the Restless in October 2011. She portrayed Angelina Veneziano, the daughter of resident mobster, Angelo. Her character was a terrible singer who was obsessed with gaining the affections of Kevin Fisher. Her character went through a redemption arc, and by the time her last episode aired in March 2012, Angelina not only could sing, she had matured into a kinder and gentler character.

DeGarmo made a cameo appearance as herself in the Lifetime Network holiday movie All About Christmas Eve, starring Haylie Duff.[23] She also appeared on the second season of TLC's wedding dress show Brides of Beverly Hills, where her search for a wedding dress was documented.[24]

During 2013, DeGarmo and Ace Young hosted a weekly one-hour entertainment show called Planet 360.[25] It started on the Hallmark Movie Channel in March, moved to TVGN in May and was canceled in December.

In 2013, DeGarmo starred in an independent film comedy called Alto.[26] DeGarmo's character, Frankie, is a struggling musician who falls in love with the daughter of a mafia don, and the two women become involved in a murder while also trying to come out to "Family." As of June 2015 the film has been shown at four festivals: The Miami Gay and Lesbian Film Festival, The VisionFest Film Festival in New York City, the Hoboken International Film Festival in Middletown, New York and the Frameline LGBTQ film festival in San Francisco. DeGarmo was nominated for the Jack Nance Breakthrough Performance Award at VisionFest, where Alto won the Audience Award.[27]

In 2016, DeGarmo's third film, The Morning Sun, based on the play The Morning the Sun Fell Down, will be released.[28]

DeGarmo was the first American Idol finalist to participate in a USO tour. She has been on four USO tours. She first went overseas in December 2005-January 2006. On that tour she entertained troops in Southwest Asia on a tour hosted by General Peter Pace.[29] Her song "Thank You" is inspired by this trip. In April 2012, she and Ace Young went on a USO tour, accompanied by fellow performers and athletes Anthony Anderson, Weeman, Dennis Haysbert, Randy Johnson, and The Dallas Cowboys Cheerleaders.[30] In February 2013 she began her third USO tour, this time joining Ace Young, Peyton Manning, Austin Collie, Curt Schilling and the Dallas Cowboys Cheerleaders.[31] Her fourth tour took place in March 2015, joining Andrew Luck, Weeman, Miss America, and several other celebrities on a tour of the middle east and military installations in Korea, Japan, and Hawaii.

In late 2007/early 2008, DeGarmo participated as a Southern celebrity in television ads for the Zaxby's restaurant chain. She also appeared as a guest voice on The Fairly OddParents Fairy Idol episode as Cosmo after Cosmo watches How to Sing Like Diana DeGarmo.

On November 2008, DeGarmo appeared on the Howard Stern Show alongside Kurt Angle.[32]

DeGarmo is also a celebrity supporter of the Muscular Dystrophy Association and was seen on the 2012 "Show of Strength" Labor Day weekend to raise money for children with neuromuscular disease.[33] She also supports and performs in fundraisers for a number of charitable organizations both nationally and locally, including Broadway Cares/Equity Fights Aids.

DeGarmo is the niece of Eddie DeGarmo of DeGarmo & Key.[34]

DeGarmo married Ace Young on June 1, 2013 at the Luxe Sunset Boulevard hotel in Los Angeles.[35] She lives in Nashville, Tennessee, with Young and their dog, Rosie.

The following is a complete discography of every album and single released by DeGarmo.