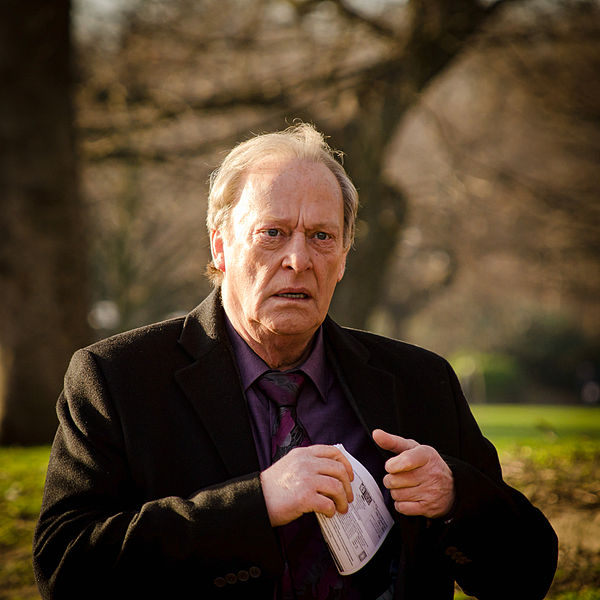 Dennis Waterman (born 24 February 1948)[1][not in citation given] is an English actor and singer, best known for his tough-guy roles in television series including The Sweeney, Minder and New Tricks.

His acting career spanned almost 60 years, starting with childhood roles in film and theatre, and including adult roles in film, television, and West End theatre. He was notable for the range of roles he played, including horror (Scars of Dracula), adventure (Colditz), comedy (Fair Exchange), comedy-drama (Minder), musical (Windy City) and sports (The World Cup: A Captain's Tale), as well as police TV series such as The Sweeney. He appeared in 27 films.

Waterman was born the youngest of nine children to Rose Juliana (née Saunders) and Harry Frank Waterman in Clapham,[2][3][4] London. The family, which included siblings Ken, Peter, Stella, Norma and Myrna, lived at 2 Elms Road, Clapham Common South Side.[2] Harry Waterman was a ticket collector for British Railways.[4] Two older sisters, Joy and Vera, had already left home by the time Dennis was born, and another brother, Allen, had died as a young child.[2]

Boxing was a big part of Waterman's childhood. His father had been an amateur boxer and made all of his sons box.[5] His older brother Ken first took Dennis boxing when he was three years old,[6] and when he was ten Dennis joined Caius Boxing Club.[5] Another older brother, Peter, was a welterweight boxing champion.[4]

Waterman was educated at the Granard Primary School, a state primary school on the Ashburton Estate in Putney, South-West London, followed by Corona Stage School, an independent school at Ravenscourt Park in Hammersmith in West London.[4]

Waterman's acting career began in childhood. His first role was in Night Train for Inverness (1960).[4] He appeared in two small stage rôles for the Royal Shakespeare Company's 1960 season.[7] In 1961, at the age of 13, he played the part of Winthrop Paroo in the Adelphi Theatre production of The Music Man. A year later, he starred as William Brown in the BBC TV series William based on the Just William books of Richmal Crompton. Waterman played the rôle of Oliver Twist in the production of the Lionel Bart musical Oliver! staged at the Mermaid Theatre, London, in the early 1960s, and appears on the cast recording released in 1961. Waterman was a series regular in the 1962 CBS comedy Fair Exchange, playing teenage son Neville Finch. Waterman was in the original cast of Saved, the play written by Edward Bond, and first produced at the Royal Court Theatre in November 1965. He had a major rôle in the 1968 film Up The Junction.

In the early 1970s Waterman appeared in the BBC television series Colditz as a young Gestapo officer. He played the brother of a victim of Count Dracula (Christopher Lee) in the Hammer film Scars of Dracula (1970), and the boyfriend of Susan George in Fright (1971). He appeared along side of Richard Harris and John Huston in a Hollywood western, Man in the Wilderness (1971). He was a member of the company of actors who featured in The Sextet (1972), a BBC 2 series which included the Dennis Potter drama Follow the Yellow Brick Road, and Waterman later appeared in the same dramatist's Joe's Ark (Play for Today, 1974). Both plays were directed by Alan Bridges. It was also in 1974 that Waterman appeared in episode 4 of the second series of the comedy programme Man About the House entitled "Did You Ever Meet Rommel", in which he played a friend of Robin's, a German student by the name of Franz Wasserman (an evident play on his own surname).

He became well known and something of a pin-up as DS George Carter in The Sweeney during the 1970s. As well as starring in Minder, he sang the theme song, "I Could Be So Good for You", which was a top three UK hit in 1980 and a top ten hit in Australia.[8] It was written by his then-wife Patricia Waterman with Gerard Kenny. Waterman also recorded a song with George Cole: "What Are We Gonna Get For 'Er Indoors?"

In 1976 Waterman released his first album, Downwind of Angels, arranged and produced by Brian Bennett. A single, "I Will Glide", was released from the album, but did not enter the top 40. The backing singers on "I Will Glide" were the choir of Belmont School, where Brian Bennett's son, Warren, was a pupil.

In 1978 Waterman returned to the RSC to play Sackett in Bronson Howard's comedy Saratoga.[9]

Waterman starred in a television film made by Tyne Tees Television entitled The World Cup: A Captain's Tale (1982). It was the true story of West Auckland F.C., a part-time side who won the Sir Thomas Lipton Trophy, sometimes described as the 'First World Cup'. Waterman played the part of Bob Jones, the club captain. It cost £1.5 million to make of which most was funded by Waterman. Shooting took place in the North East and in Turin in Italy. Scenes were shot in County Durham pit villages and in Ashington, Northumberland where goal posts and a grandstand were erected in a public park with a colliery headframe in the background. Local players took part, donning long pants and high-sided boots of the day, and even suffering "short back and sides" haircuts. The production boasted several comedy sequences, including a meeting of the club committee and a meeting of the Football Association Council when the suggestion of an English team participating in the new competition received a lukewarm and cynical response from the members. Also on the agenda was the F.A. Cup draw performed in the conventional manner and immediately dispatched direct from the council chamber to the clubs "by carrier pigeons" released out of the windows.

In 1982, Waterman starred in the musical Windy City. A relatively short-lived production, the cast included Anton Rodgers, Diane Langton, Victor Spinetti and Amanda Redman, with whom Waterman had an eighteen-month affair during the run of the musical and with whom he later went on to star in the TV series New Tricks. Windy City closed on 26 February 1983 after 250 performances. Waterman took the lead male rôle in the BAFTA Award-winning BBC adaptation of Fay Weldon's The Life and Loves of a She-Devil (1986).

In 1983, Waterman narrated an eight-part BBC documentary series about Asian martial arts entitled The Way of the Warrior.

Waterman sang the theme tunes to three more programmes in which he appeared: the comedy drama Stay Lucky with Jan Francis (Yorkshire Television/ITV 1989), sitcom On the Up (BBC 1990) and crime drama New Tricks (Wall to Wall television for BBC, 2003). In 1997 he appeared as John Danson (the head of the largest UK smuggling network) in series 3 of the UK TV drama The Knock.

He was a regular cast member in every season of New Tricks, from 2003 to 2014. After expressing his intent to leave the series during its final season (2015), he appeared in only the first two episodes. He recited excerpts from the journal of Walter H. Thompson for the UK history series Churchill's Bodyguard. He appeared on stage in Jeffrey Bernard is Unwell by Keith Waterhouse[11] and as Alfred P. Doolittle in the 2001 London revival of My Fair Lady. He narrated the reality-format television programme Bad Lads' Army and appeared in the 2009 BBC2 miniseries Moses Jones.

Waterman has been married four times:

Waterman's marriage to Lenska ended because of his violent behaviour towards her. In March 2012 he caused controversy with some comments on this issue: "It's not difficult for a woman to make a man hit her. She certainly wasn't a beaten wife, she was hit and that’s different."[12][13] The interview was broadcast in full on Piers Morgan's Life Stories on ITV in May 2012.[14]

Waterman was banned from driving for three years in January 1991, following his second drink-driving conviction in four years. [15]

Waterman is a fan of Chelsea F.C.[16] His love of football was reflected in his being chosen to present Match of the Seventies from 1995 to 1996, a nostalgic BBC show celebrating the best football action from the 1970s.[17]

Waterman has been caricatured by David Walliams in the radio and TV comedy series Little Britain, in sketches where he visits his agent (played by Matt Lucas) looking for parts. Most of the jokes in these sketches feature Waterman being extremely small, with common objects being made to appear massive in comparison. The Waterman caricature is offered, but always declines, respectable parts because he is not allowed to "write the theme tune, sing the theme tune" (rendered as "write da feem toon, sing da feem toon") of the particular production. This running joke is based on the fact that Waterman sang the theme tunes for at least four of the programmes in which he has starred, namely for Minder,[18] New Tricks,[18] On the Up[19] and Stay Lucky.[20] It is common to misattribute the Minder theme tune ("I Could Be So Good for You") to Dennis Waterman. Although he was the singer on the theme song, it was written by his then partner Patricia Maynard and Gerard Kenny. In November 2006, Waterman made a guest appearance in a Little Britain stage show, alongside the comedy character version of himself.