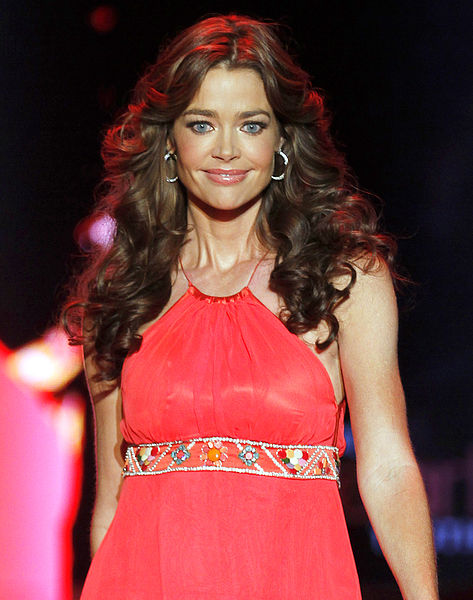 Denise Lee Richards (born February 17, 1971)[1] is an American actress and former fashion model. She has appeared in numerous films, including Starship Troopers (1997), Wild Things (1998), Drop Dead Gorgeous (1999), The World Is Not Enough (1999) as Bond girl Christmas Jones, Valentine (2001), and Undercover Brother (2002). From 2008 to 2009, she starred on the E! reality show Denise Richards: It's Complicated. In 2010 and 2011, she was a series regular on the comedy Blue Mountain State. She is currently starring in the Bravo reality show, The Real Housewives of Beverly Hills, joining in the ninth season.

Richards was born in Downers Grove, Illinois, to Joni, who owned a coffee shop, and Irv Richards, a telephone engineer.[2][3] Her ancestry is German and French.[4] She has a younger sister, Michelle.[5][6] Richards grew up in both Mokena and Downers Grove. When Richards was 15 years old, she and her family moved to Oceanside, California where in 1989 she graduated from El Camino High School.[5] As a child, she was the "only girl on the baseball team".[7] Richards was raised Roman Catholic.[8] At the age of 15, she appeared in the U.S. version of the music video "The Captain of Her Heart" by Double. After her high school graduation, she began working as a model and traveled to big cities such as Paris, New York, and Tokyo to do photo shoots and commercials.[5]
Read more...

She spent the majority of the 1990s appearing in lower-budget films and television shows such as Saved by the Bell, television movies, and guest starring in episodes of several television shows such as Married... with Children (1991), a five-second walk through. She later made guest appearances in shows such as Beverly Hills, 90210 (1992), Seinfeld (1993), Lois and Clark (1994) and a guest-arc in Melrose Place (1996). Her first starring role in a wide theatrical release was Starship Troopers in 1997 for which Richards was nominated for the Blockbuster Entertainment Award for Favorite Female Newcomer. She followed this with a role in Wild Things.[9] Variety praised Richards' transition from good-girl-type roles to manipulative villainess and the review continued to include her as part of "an ensemble that appears to be enjoying the challenge of offbeat roles and unusual material. There's not a wrong note struck by the game group of players."[10] In 1998, she appeared in the music video for the Blues Traveler song "Canadian Rose".[11]

Richards at the premiere of The World Is Not Enough (1999)

Richards was cast as the nuclear physicist Christmas Jones in the 1999 James Bond film The World Is Not Enough (1999). Though she considered her role "brainy", "athletic", and having depth of character,[12] she was criticized as not credible in the role.[13][14] Her outfit, which often comprised a low-cut tank top and tight shorts, elicited unfavorable comments.[15] She was ranked as one of the worst Bond girls of all time by Entertainment Weekly in 2008,[16] and was chosen as "Worst Supporting Actress" at the 1999 Razzie Awards for the role,[17] although, Richards was also nominated for the Blockbuster Entertainment Award for Favourite Actress - Action, for the same film. Later that year, Richards starred alongside Kirsten Dunst in the beauty pageant satire, Drop Dead Gorgeous. Richards, playing a spoiled princess, was praised for her performance by Los Angeles Times for being "as rightly nasty as she is pretty".[18]

In 2001, she guest-starred in Friends as Ross and Monica Geller's cousin, Cassie Geller in the episode "The One with Ross and Monica's Cousin".[19][20] Later that year she appeared in four episodes of Spin City as Jennifer Duncan, a love interest of Charlie Sheen's character. She starred as Sheen's character's ex-girlfriend two years later in two episodes of Two and a Half Men. In 2005, she starred in the short-lived UPN series Sex, Love & Secrets. Richards appeared in films such as Valentine (2001), Undercover Brother (2002) and Scary Movie 3 (2003). In 2003, she made a very brief appearance in the British romantic comedy, Love Actually. In 2005, she starred in the ensemble drama, Edmond alongside Julia Stiles.

In December 2004, she posed for a nude pictorial in Playboy magazine, five months after giving birth.[21] Richards posed semi-nude for the July 2006 issue of Jane magazine to raise money for the Clothes Off Our Back Foundation. In 1999, she ranked 9th in Maxim's 50 Sexiest Women and in 2001 she was voted 2nd in FHM's USA 100 Sexiest Women, 5th in FHM's 100 Sexiest Women and 19th in AskMen.com's 50 Most Beautiful Women. She was named one of the "100 Hottest Women of All-Time" by Men's Health.[22] In 2008, she reunited with her Wild Things on-screen mother Theresa Russell in Jolene. Richards appeared on the 8th season of Dancing with the Stars, paired with Maksim Chmerkovskiy. She was eliminated second on March 24, 2009.

In 2010, she joined the cast of Blue Mountain State, a Spike comedy series. Richards plays Debra, the ex-wife of Coach Daniels.[23] In July 2011, Richards published a memoir The Real Girl Next Door, a New York Times Best Seller.[24] Richards was part of TV Guide Network's show, Hollywood Moms' Club, which aired in November 2011.[25][26] In September 2011, Richards reportedly turned down $100,000 to appear as an ex-girlfriend at Charlie's funeral in Two and a Half Men.[27] A month later, she began filming a guest spot for an episode for the sixth season of NBC comedy 30 Rock.[28] In 2012, Richards joined the cast of ABC Family pilot, Twisted (formerly Socio). In February 2013, ABC Family commissioned the drama for a full series.[29]

In August 2018, Richards announced that she will be joining the Bravo reality series, The Real Housewives of Beverly Hills, for their upcoming ninth season.[citation needed]

Marriage to Charlie Sheen and children

In March 2005, while pregnant with their second daughter, Richards filed for divorce from Sheen.[33] The couple briefly reconciled and sought marriage counselling. However, on January 4, 2006, Richards' representative announced that she was continuing with the divorce. She later sought a restraining order against Sheen, alleging death threats against her.[34] On April 19, 2006, Richards filed formal legal papers seeking a divorce from Sheen under the laws of the state of California.[35] On November 30, 2006, Richards and Sheen's divorce became final, with Sheen being ordered to stay 300 feet away from his ex-wife and their daughters, except during supervised visits.[36]

In 2008, Richards included her and Sheen's two daughters in her confessional reality program on E!, Denise Richards: It's Complicated, which premiered on May 26, 2008. He deemed her plans "greedy, vain and exploitative".[37] On January 25, 2008, Richards won a court case against Sheen so that she could include their daughters in the show.[38] When a judge rejected Sheen's request to block it,[39] Sheen urged fans to boycott it.[40] An agreement was reached between Sheen and Richards in the custody of the children, with Sheen stating in April 2009 that "we had to do what's best for the girls".[41]

In May 2010, Richards was handed over custody of her and Sheen's two daughters by Sheen. The two signed a written agreement stating that she now has sole legal custody of Sam and Lola. They previously had joint legal custody of the girls and Richards wanted sole custody, given Sheen's then "marital turmoil (with his third wife Brooke Mueller), sobriety issues, and criminal problems". According to sources, Sheen did not fight about signing the agreement.[42]

In June 2011, Richards adopted a third daughter as a single parent.[43] Her middle name is that of Richards' mother, who died from cancer in December 2007.[44][45] Richards adopted her at birth domestically within the United States, following a two-year adoption process.[46][47]

By mid-2012, Richards and Sheen were on good terms,[48] often spending time together with their children. In 2012, he made a cameo appearance in her movie Madea's Witness Protection and she appeared in Sheen's television series, Anger Management on the FX network.[49] In a move supported by Sheen, in May 2013, Richards was awarded temporary custody of the twin sons born in 2009 to Sheen and Mueller, after the children were removed from Mueller's home by child protective services due to concerns over drug use.[50] Richards had previously cared for the children on other occasions as well, including during Mueller's December 2012 stint in rehab for addiction to Adderall.[50]

In December 2017, Richards began dating Aaron Phypers, ex-husband of actress Nicollette Sheridan. At the time, Phypers and Sheridan had been separated for over a year, with their divorce eventually becoming finalized in August 2018.[51] A month later on September 8, 2018, Richards and Phypers married in Malibu, California.[52]

In 1990, at age 19, Richards had a rushed breast implant procedure, which led to the doctor putting in larger implants than she asked for. As Richards was preparing to film 1998's Wild Things, she had a corrective breast implant procedure, with the surgeon again giving her larger implants than she expected. In 2004, Richards posed for Playboy, stating that she "wanted to encourage women that it's OK to embrace your sexuality even though you're a mom At the same time, I was having some problems in my marriage and I didn't feel sexy and felt I had to prove something."[53]

Richards has appeared in the NOH8 Campaign[54] and has spoken in support of gay marriage, stating (during an interview with radio host Howard Stern) that, years before, she had had a lesbian affair. Richards added, "You would know who she is", but declined to name the woman.[55]

On November 8, 2006, officers from the Royal Canadian Mounted Police (RCMP) were called to the River Rock Casino in Richmond, British Columbia, where Richards was making a movie. After having seen two photographers taking her picture from a nearby balcony, she confronted them and threw their two laptop computers over the balcony. No charges were filed against her.[56][57][58]

Richards has worked with Best Friends Animal Society on several projects, including its Pup My Ride program, which transports small dogs from high-kill animal shelters to other parts of the US where there's a greater demand for small dogs. She has regularly appeared on Access Hollywood's monthly pet segment showcasing shelter dogs rescued by Best Friends and available for adoption.[59][60] While assisting with relief efforts in New York following Hurricane Sandy, she adopted a puppy from a Long Island shelter.[61]