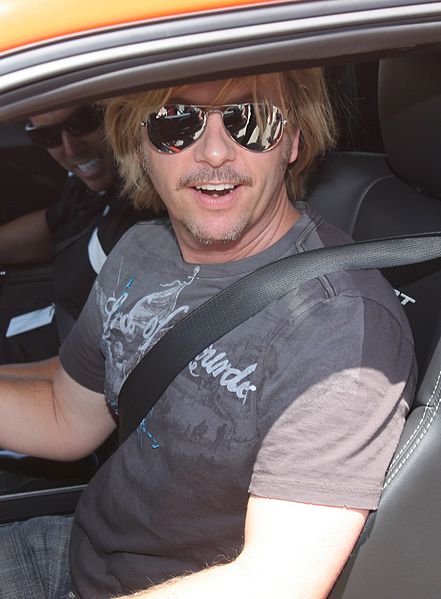 David Wayne Spade (born July 22, 1964)[1] is an American actor, stand-up comedian, writer, and television personality. He rose to fame in the 1990s as a cast member on Saturday Night Live, then began a successful acting career in both film and television. He also starred or co-starred in the films Tommy Boy, Black Sheep, Joe Dirt, Joe Dirt 2: Beautiful Loser, Grown Ups, and Grown Ups 2, among others.

His comedic style, in both his stand-up material and acting roles, relies heavily on sarcasm[2] and self-deprecation.[3]

Spade was born in Birmingham, Michigan to Judith J. (née Meek), a writer and magazine editor, and Wayne M. Spade, a sales representative.[1][4][5] His brothers are Bryan and Andy Spade;[6] Andy Spade is an entrepreneur who, together with his late wife Kate Spade, co-founded the designer brand Kate Spade New York.

Spade and his family moved to Scottsdale, Arizona, when David was four years old.[7] His parents divorced soon thereafter, and he and his brothers were raised for the most part by their mother, in relative poverty.[8]

Spade attended Saguaro High School and later Scottsdale Community College, before transferring to Arizona State University, where he earned his bachelor's degree in business in 1986.[9][10] He also was a member of the Sigma Alpha Epsilon fraternity.[11] Spade performed standup at the university's long-running sketch comedy show, Farce Side Comedy Hour, on numerous occasions. In the mid-80s he also did "stand up" in the Monday night comedy show at Greasy Tony's Pizza in Tempe, Arizona.[citation needed]

With the help of friend and fellow comedian Dennis Miller, he joined Saturday Night Live in 1988. By 1990, Spade was a regular cast member as well as a writer. While there, he became known for his brand of sarcasm, and his characters in a number of sketches were hits. Some of them include a flight attendant for "Total Bastard Airlines" who bids a dismissive "Buh-Bye" to each passenger upon disembarking; a receptionist for Dick Clark who, as a matter of policy, asks people indiscriminately, "And you are?"; and the sarcastic "Hollywood Minute" reporter who puts celebrities down by means of one-liners. Other characters include Christy Henderson from the Gap Girls and Karl from the Karl's Video sketches. He also did impressions of various celebrities, including Brad Pitt and Michael J. Fox. According to interviews with Spade, most of the material that he wrote early in his time at SNL was given to Dana Carvey to perform on the show. Due to his relatively low work rate, he was in danger of being fired as a performer, until the "Hollywood Minute" segment secured his position.

The most infamous moment of "Hollywood Minute" occurred in 1996 when a picture appeared on-screen of Eddie Murphy, himself a former Saturday Night Live cast member and Spade exclaimed, "Look, children, it's a falling star. Make a wish!", referring to Murphy's lack of box office success at the time, most recently with the film Vampire in Brooklyn. The crack led to audience boos and made Murphy angry at both Spade and SNL for several years afterward.[12]

Though most of the cast left in 1995, Spade stayed the following year to help in the transition with the new cast. He then quit in 1996 citing "burnout" as the reason. Said Spade, "When I leave, it will be to ease the pressure, not to be a movie star. You can't stay there forever - it kills you inside. It ages you in dog years. It's a tough place." He returned to host an episode in 1998 and another in 2005.

Spade's film career was successful. He appeared with fellow Saturday Night Live cast member and friend Chris Farley in two buddy comedy films, Tommy Boy (1995) and Black Sheep (1996). The two were planning a third film together when Farley died of a drug overdose in 1997 at the age of 33. When Spade declined to attend Farley's funeral, rumors abounded that there was a falling out between the two. Spade admitted that their friendship had been strained partly because of Farley's drug problem, but stated that the reason he did not attend the funeral was simply that he could not handle it emotionally.[13]

Although he received several offers to star in his own TV shows, he turned them down and joined the ensemble cast of Steven Levitan's office sitcom Just Shoot Me!, opposite Laura San Giacomo and George Segal, which ran for seven seasons from 1997 to 2003. He played a sarcastic receptionist, Dennis Finch.

While appearing on Just Shoot Me, Spade had his first solo starring role as the title character in the 2001 film Joe Dirt, which was a modest box office success. The film was co-written by Spade and Fred Wolf.

Spade starred again in the 2003 film Dickie Roberts: Former Child Star, again co-written by Spade and Wolf. It was the first of many films in which Spade has appeared that were produced by another Saturday Night Live castmate, Adam Sandler. Most notable among these are the films Grown Ups (2010) and Grown Ups 2 (2013), both of which included Spade and Sandler among the lead roles, and both of which were major box office hits.

Spade hosted both the Teen Choice Awards and SpikeTV's Video Game Awards in 2003. He voiced characters on several episodes of Beavis and Butt-head and produced his own TV series Sammy in 2000. From 2002 to 2006, Spade regularly appeared in commercials for Capital One (with Nate Torrence) where he played the employee of a fictional rival company whose policy toward honoring credit card rewards (and just about everything else) is "always no." In 2004, he joined the cast of 8 Simple Rules, following the death of the sitcom's star, John Ritter, for the show's third and final season.

He hosted the Comedy Central TV show The Showbiz Show with David Spade for three seasons, from September 2005 to October 2007. On the show, Spade made fun of Hollywood and celebrities in a manner similar to his old "Hollywood Minute" segment on SNL.[14]

Spade was one of the voice talents for the 2006 video game The Legend of Spyro: A New Beginning. He provided the voice of Spyro's dragonfly companion, Sparx.[15]

From 2007 to 2013, Spade starred as Russell Dunbar in the ensemble CBS sitcom Rules of Engagement.

In 2010, he worked with TBS on a pilot for an animated series based on Joe Dirt, but it was eventually dropped.[16]

In 2014, Spade had a guest role on an episode of ABC sitcom The Goldbergs (on which George Segal has a major role as "Pops", the protagonist's grandfather). The end credits featured an interaction between Pops and Spade's character.[17]

Spade received an Emmy nomination and two Golden Globe nominations for his role as Dennis Finch on Just Shoot Me!.

On September 5, 2003, Spade received a star on the Hollywood Walk of Fame.

Spade has dated numerous actresses and celebrities, including Heather Locklear, Julie Bowen, Teri Hatcher, and Naya Rivera,[18][19] with E! News calling him "a bachelor-era George Clooney of the comedy world".[20] He and Playboy Playmate Jillian Grace have a daughter, Harper, born August 26, 2008.[21][22]

Report a problem
Write to David Spade at FanPal • 2021