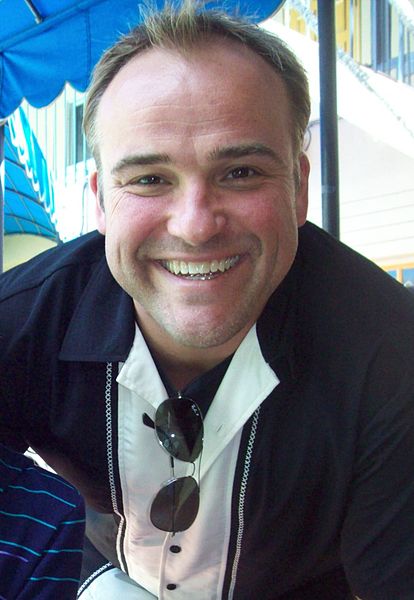 David Dominick DeLuise (born November 11, 1971) is an American actor and television director best known for his starring roles on Megas XLR and Wizards of Waverly Place.

DeLuise was born in 1971, the youngest son of actor and comedian Dom DeLuise and actress Carol Arthur (née Arata).[1] He is the brother of actor, writer, director Peter DeLuise and actor Michael DeLuise.[2]

He married Brigitte DeLuise in September 1994. They were divorced in May 2003. They have two daughters, Riley DeLuise, who appeared in Hairshirt with him, and Dylan DeLuise.

His godmother was the late Anne Bancroft and his sister-in-law (married to Peter) is Anne Marie DeLuise.

His first leading role came in 2003, in BachelorMan. He had a recurring role in 3rd Rock from the Sun as Bug Pollone and was a regular performer on Jesse during its first season, playing Jesse's brother Darren. He also played a recurring role in Stargate SG-1 as Pete Shanahan. He was also seen in a Purina commercial for Beneful dog food, and a Kentucky Fried Chicken commercial.

DeLuise is also known for voicing Coop on the short-lived action animated Megas XLR (later reprising his role for the Cartoon Network game FusionFall) and Sergeant Brutto in Roughnecks: Starship Troopers Chronicles. In 2005, he starred opposite Maggie Wheeler on the NBC pilot The Sperm Donor. In 2012, he had a guest role on Rizzoli & Isles as Dominic.

He portrayed the character of Jerry Russo, the family patriarch and former wizard on Disney Channel's Wizards of Waverly Place and Wizards of Waverly Place: The Movie from 2007 to 2012. DeLuise also directed numerous episodes of the series, beginning with the episode "My Tutor, Tutor" (2009). He has since directed episodes of How to Rock, See Dad Run, Lab Rats and The Thundermans.

In August 2012 he appeared in a commercial for KFC's Original Recipe Bites.[3]