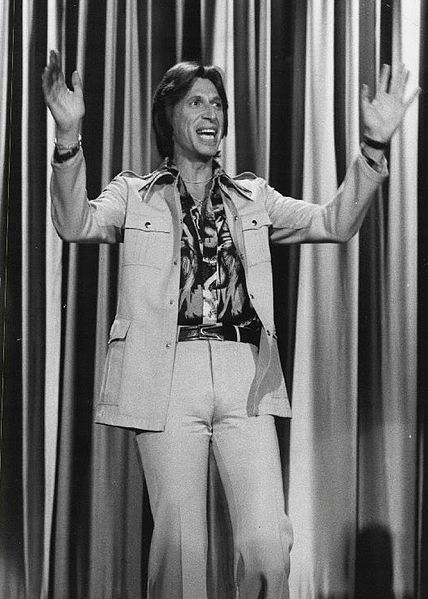 David Norris Brenner (February 4, 1936 - March 15, 2014) was an American stand-up comedian, actor and author. The most frequent guest on The Tonight Show Starring Johnny Carson in the 1970s and 1980s, Brenner "was a pioneer of observational comedy."[3]

Brenner was born to Jewish parents in 1936[4] and raised in South and West Philadelphia.[1] His father, Louis, was a vaudeville comedian, singer and dancer, performing under the stage name of Lou Murphy, who gave up his career and a film contract to please Brenner's grandfather, a rabbi, who objected to his working on the Sabbath.[1] Once David became successful, he regularly sent his parents on cruises, and both of Brenner's parents would eventually die at advanced ages while on cruises aboard the Queen Elizabeth 2, approximately two years apart.[5]

After high school, Brenner spent two years in the U.S. Army, serving in the 101st Airborne and as a cryptographer of the 595th Signal Corps in Böblingen, Germany. After being discharged, he attended Temple University, where he majored in mass communication and graduated with honors.[1]

Brenner was a writer, director or producer of 115 television documentaries and headed the documentary units of Westinghouse Broadcasting and Metromedia, winning nearly 30 awards including an Emmy, before moving to comedy.[1][6] His first paid gig was at The Improv in June 1969, and following that he frequently performed at clubs in Greenwich Village.[1] After making his national television debut in 1971, on The Tonight Show Starring Johnny Carson, he became the show's most frequent guest, with 158 appearances. He guest-hosted for Johnny Carson 75 times between 1975 and 1984, placing him fifth on the list of Carson's most frequent guest hosts. Brenner was ranked No. 53 on Comedy Central Presents: 100 Greatest Stand-Ups of All Time. At one point, he had appeared more often on major TV talk shows than any other entertainer.[7] He also wrote five books,[8] and starred in four HBO Specials.[9]

Brenner released the comedy album Excuse Me, Are You Reading That Paper? on MCA Records in 1983 (The title arose from a gag wherein a fellow passenger on a subway asked Brenner if he was reading a newspaper on which he was sitting. Brenner stood up, turned the page, sat down and said, "Well, yes I am.") Brenner also penned five books[1] including Soft Pretzels With Mustard (1983), Revenge is the Best Exercise (1984), Nobody Ever Sees You Eat Tuna Fish (1986), If God Wanted Us to Travel... (1990), and I Think There's a Terrorist in My Soup: How to Survive Personal and World Problems with Laughter—Seriously (2003) which was also released as two audiobooks.

Brenner was the star of the 1976 TV series Snip (alternative title: Flip), which was inspired by the film Shampoo and set in a hair dressing salon.[1] The situation comedy was cancelled by NBC before it aired due to its inclusion in the supporting cast what would have been one of the first gay characters in an American situation comedy. He also played a charity ball auctioneer in the 1989 romantic comedy Worth Winning (with Mark Harmon, Madeleine Stowe, and Lesley Ann Warren, who was also Brenner's co-star on Snip).[1]

In 1986, King World Entertainment gave Brenner his own 30-minute syndicated late-night talk show, Nightlife, in an attempt to compete with Carson, but it was cancelled after one season. The show premiered September 8, 1986, on 102 stations[10] and was touted as "alternative".[11] Filmed in Manhattan and featuring a casually dressed Brenner,[11] it was unique among the late night talk genre for not having a monologue.[11] It gave some comedians, such as Bobby Slayton, their national television premieres.[12]

In addition to the Tonight Show, Brenner also appeared on The Ed Sullivan Show, The David Frost Show, The Mike Douglas Show, Late Night with David Letterman and the Late Show With David Letterman, Real Time With Bill Maher and The Daily Show and was a frequent guest on The Howard Stern Show.[1] In later years he appeared on both MSNBC and Fox News Channel shows commenting on current events.[2]

The Broadcast Pioneers of Philadelphia named Brenner their Person of the Year in 1984 and inducted him into their Hall of Fame in 2003.[13] From 1994 to 1996, Brenner hosted a talk-radio program, taking over the timeslot of the long-running Larry King Show on the Mutual Broadcasting System.[14][15] He had earlier hosted a syndicated weekly radio show, David Brenner Live, for three months in 1985.[16][17]

Brenner had three children—Cole, Slade and Wyatt.[19] He and the mother of Cole, his first son, fought a custody battle for several years. Brenner finally won child custody in 1992. Because family courts would have regarded him as an absentee father if he were away from home more than 50 nights a year, Brenner substantially reduced the number of appearances in his stand-up comedy work, including performances on the Tonight Show in order to secure and maintain custody of his son.[1][2] Brenner married Elizabeth Slater of New York, the mother of his sons Slade and Wyatt, in the closing minutes of his David Brenner: Back with a Vengeance! HBO Special recorded in Las Vegas, on February 19, 2000. They divorced a little over a year later and also then fought two custody battles, both of which Brenner won. Brenner was engaged to Tai Babilonia in 2005, but they never married.[1][2] For a while in the 2000s, Brenner lived in Las Vegas.[12]

Report a problem
Biography of David Brenner at FanPal • 2020