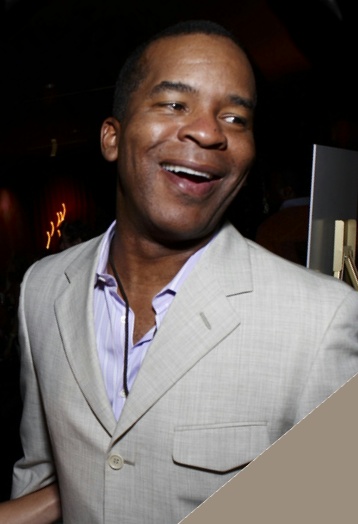 David Alan Grier (born June 30, 1956)[1] is an American actor and comedian. He is best known for his work on the sketch comedy television show In Living Color.

One of three children,[2] Grier was born in Detroit, Michigan, the son of mother Aretas Ruth (née Blaney), a school teacher, and father William Henry Grier, a psychiatrist and writer who co-wrote the book Black Rage.[3]

Grier graduated from Detroit's magnet high school, Cass Tech, and received a B.A. from the University of Michigan, and an M.F.A. from the Yale School of Drama in 1981.

When Grier was young, his family marched with Martin Luther King, Jr. in a March on Poverty in Detroit, where King gave an early version of the "I Have A Dream" speech.[4]

Immediately after graduating from Yale, Grier landed the role of Jackie Robinson in the short-lived Broadway musical The First, directed by Martin Charnin and written by Joel Siegel.

Grier got his start on the National Public Radio radio drama adaptation of Star Wars in 1981. He was the voice of a nameless X-wing fighter pilot during the Battle of Yavin.

Grier was nominated for a Tony Award for Best Featured Actor in a Musical and won the Theatre World Award for The First. He later starred as James "Thunder" Early in the hit Broadway musical Dreamgirls. Grier made his film debut in 1983 in Streamers, directed by Robert Altman. He won the Golden Lion for Best Actor at the Venice Film Festival for the film. He also appeared in the Negro Ensemble Company production A Soldier's Play and reprised his role in the film version A Soldier's Story. Grier also appeared as a geology professor at the fictitious Hillman College in the show A Different World where he was a crush of several of the girls on the show including lead character Denise Huxtable played by actress Lisa Bonet.

Although primarily known for his dramatic work, Grier began to shift towards comedy, making memorable appearances in the cult films Amazon Women on the Moon and I'm Gonna Git You Sucka. Keenen Ivory Wayans, the director of Sucka, cast Grier in his new variety show In Living Color. It became a ratings hit and won an Emmy for Outstanding Variety Series. Grier became a popular cast member through his characters, which ranged from hyperactive children to crotchety old men. Among his prominent characters were obnoxious, megaphone-blaring shop teacher Al MacAfee; the elderly Mr. Brooks, whose autumn years are a never-ending verbal battle with his wife; Calhoun Tubbs, a blues musician with very limited creativity; a member of Funky Finger Productions, a production company with more ambition than resources; Tiny, a prison inmate obsessed with female "breastses"; and, perhaps most famously, flamboyant and effeminate Antoine Merriweather in the "Men on..." sketch series. He also played Rev. Leon Lonnie Love on the TV series Martin. After his success on the show, Grier began appearing in comedies such as Boomerang (as Eddie Murphy's shy friend Gerard), Blankman (with Damon Wayans), In the Army Now (as Fred Ostroff) along with Pauly Shore and Andy Dick in 1994, and as a policeman whose car is memorably crushed and eaten by a giant pod in Jumanji. Grier appeared with Tom Arnold in the 1997 comedy McHale's Navy as Ensign Charles Parker. In 1999, he made a guest appearance as himself in the "Aw, Here it Goes to Hollywood" episode of Nickelodeon's sitcom, Kenan & Kel.[5]

After the cancellation of In Living Color, Grier starred in the short-lived sitcoms The Preston Episodes, Damon (with In Living Color co-star Damon Wayans), and DAG.

Grier had a cameo in the Robert De Niro and Edward Burns movie 15 Minutes as a Central Park mugger. In a departure from the childlike roles he often played on In Living Color, he portrayed an abusive father in Rusty Cundieff's anthology film Tales from the Hood. He began doing stand-up comedy and began hosting the Comedy Central series Premium Blend. He was ranked no. 94 on Comedy Central 100 Greatest Stand-Ups.

Grier returned to Broadway to perform in the musical A Funny Thing Happened on the Way to the Forum. In 2002, Grier joined the cast of the improv-based ABC sitcom and Bonnie Hunt vehicle Life with Bonnie which ran only two seasons. During this time, he continued to appear in comedy films but also returned to drama in the films Baadasssss! and The Woodsman. He starred in his own Comedy Central stand-up special The Book of David: The Cult Figure's Manifesto. He is also a frequent guest on the Comedy Central show Crank Yankers. Grier was the host of the NBC show Thank God You're Here. He also appeared in the revival production of The Wiz at the La Jolla Playhouse directed by Des McAnuff.

Grier starred in Gym Teacher: The Movie playing the villain, Shelly Bragg. He appeared as Uncle Henry in the ABC 2005 television movie The Muppets' Wizard of Oz.

In October 2008, Grier hosted Chocolate News, a Comedy Central spoof of a TV news magazine show. Comedy Central did not renew the show for a second season.

Grier appeared as Sugar Bear in the 2009 movie Dance Flick. He also provided the voice for Kobe Bryant in the Nike puppet commercials.

He returned to Broadway for the premiere of Race, written and directed by David Mamet, opposite James Spader, Kerry Washington, and Richard Thomas, which opened at the Ethel Barrymore Theatre on December 6, 2009. Grier received his second Tony Award nomination for his role.[6]

Grier most recently appeared on Broadway as Sportin' Life in the Gershwins' Porgy and Bess, which opened at the Richard Rodgers Theatre on January 12, 2012, alongside Norm Lewis and Audra McDonald. He was nominated for the Tony Award for Best Performance by a Featured Actor in a Musical for this role.[7] In addition to his Tony Award nomination, Grier received a 2013 Grammy nomination for Best Musical Theater Album for his performance on the cast recording of the play.[8]

Grier guest-starred in Season 6 of FOX's Bones. He played Professor Bunsen Jude the Science Dude, the host of a children's TV program. This character was inspired by Bill Nye "the Science Guy".[9]

He played the Cowardly Lion in NBC's live performance of The Wiz, which aired on December 3, 2015.[11]

He was often referred to as the third host of the radio show Loveline, as he was a frequent guest and guest host (usually filling in for Adam Carolla). One of his most famous contributions was a bit where he began calling out various pharmaceutical drugs Dr. Drew was recommending to a caller as though they were the names of black children being yelled at by their parents. The episode aired on September 7, 2005, towards the end of the show.

In another notable episode - that of September 25, 2002 - Grier stopped by to lament his recent breakup with his girlfriend of four years. He had just found out she had been cheating on him with several famous actors; he coughed while saying the names to avoid legal difficulties. During the show Engineer Anderson slowed down the recording and played it back, and the listeners were able to discern the names Tom Sizemore, Colin Farrell, and Cuba Gooding Jr..

On March 3, 2009, Grier was a guest on The Adam Carolla Podcast. He explained that the reason he was not asked back on Loveline was that the producers of the show did not want him back on despite Dr. Drew pressing for him to continue to be a guest. While Dr. Drew was not open with him about this at the beginning, Grier felt no resentment toward him and Dr. Drew has since apologized for what happened. Shortly thereafter, Dr. Drew explained what had happened on Loveline and expressed his intent to petition the producers for Grier to return. On August 10, 2009, after a gap of over three years, Grier was once again on Loveline, joining former host Adam Carolla and Dr. Bruce Heischober.

Grier has made many guest appearances on the Adam Carolla Show, usually to plug his improv performances. One of his recurring bits is where he enacts a heavy-set black woman named Peanut who does a terrible job answering the phones for The Adam Carolla Show. He also frequently antagonized the former co-host Alison Rosen. He did this by snoring loudly while Alison read the news and also by referring to her as "Teresa" or "Fake Teresa," the name of Alison's predecessor Teresa Strasser.

David was a contestant on the eighth season of Dancing with the Stars,[12] partnered with Kym Johnson. By the fourth week of the competition, Grier announced that he had lost 26 pounds.[13] He was eliminated in the fifth week.

Grier co-starred with Jon Stewart in Elmopalooza, as the director of Jon's production crew.

In 2008 Grier starred in the Comedy Central TV series Chocolate News which had satirical sketches about current events and news stories. It lasted for 1 season (10 episodes).

Grier's first book Barack Like Me: The Chocolate-Covered Truth was published by Simon & Schuster in 2009.[14][15] The book recounts Grier's own life story, and was written with Alan Eisenstock.

Grier made an appearance on the Dave, Shelley, and Chainsaw (DSC) Show (San Diego Jack 100.7 FM) on October 5, 2012 before performances at The Madhouse Comedy Club. He mentioned the "other" David Alan Grier and the "Farrakhan - The Musical" stories.[16]

Grier appeared in an episode of Clean House along with his brother and his brother's family. Grier invited the show to help his brother due to his severe problems with clutter, and the family received a home makeover.

Grier was married to Maritza Rivera and divorced in 1997. In July 2007, he married Christine Y. Kim, an associate curator of the Los Angeles County Museum of Art. She gave birth to their daughter, Luisa Danbi Grier-Kim on January 10, 2008, at Cedars-Sinai Medical Center, in Los Angeles.[18] On June 9, 2009, according to TMZ, Kim filed for divorce, citing irreconcilable differences.[citation needed]

He is a fan of motorcycles[19][20][21][22][23] and owns the rare Yamaha YZF-R1 Limited Edition.[24] On the August 10, 2009, episode of Loveline, Grier agreed to auction it to aid Bryan Bishop's Tumor Fund, but walked off set while Carolla and the audio engineer bickered on air.[citation needed]

He is an avid cook and began food blogging during the run of the play Race, where James Spader helped to critique the food Grier made.[4]

He is also a black belt in taekwondo. Grier was able to showcase his skills in the 1994 film Blankman as his character, Kevin Walker, "The Other Guy", was shown to be particularly adept in martial arts.[citation needed]