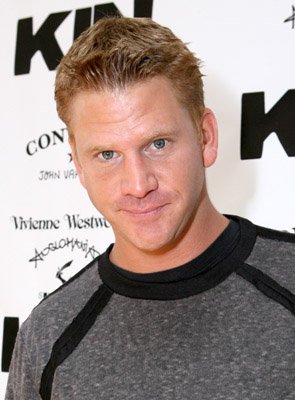 Mihok was born in New York City,[5] the son of theater actors Andrea Mihok (née Cloak) and Raymond Thorne (né Mihok).[6][7] He has two older sisters: Gwen Mihok, an actress, and Cecily Trenka, a science teacher.[8][9] He is of Czech and British descent.[10]

Mihok attended Fordham University and took pre-college courses, but began to work around the age of 18 so never completed his degree.[10]

Mihok got his start doing guest spots in local New York City productions of Law & Order, NYPD Blue, and New York Undercover. In 1994, Mihok debuted in the independent film, Black is White. In 1995, Mihok appeared in the CBS movie of the week, Murderous Intent.

In 1996, Mihok appeared in director Barry Levinson's film, Sleepers, which was notable for its depiction of sexual abuse. Mihok said he did a lot of research for that role. He was also in the Angelina Jolie film, Foxfire.[13]

In 1996, the Leonardo DiCaprio and Claire Danes-starring Romeo + Juliet was Mihok's breakout role. To prepare for his audition, Mihok studied Shakespeare and had five extensive audition sessions with director Baz Luhrmann before landing the role of Benvolio.[10] The film shot on location in Mexico, and Mihok said he considers the experience life-changing.[13]

In 1998, for Terrence Malick's Thin Red Line, Mihok said he spent an intensive six months working on the film,[14] with the amount of footage constituting a full starring part, but during editing was reduced to an ensemble role as Private First Class Doll.[10][15] Mihok is slated to direct an episode in 2017,[16] as he said he has been directing pilots to prepare.[17]

In 1996, Mihok was a featured regular in the role of Joey in the Rhea Perlman CBS sitcom Pearl.[13]

In 1999, Mihok appeared on The WB series Felicity, where he portrayed Lynn, a competitive swimmer, in multiple episodes.

Mihok has been featured in roles in films such as The Day After Tomorrow, The Perfect Storm, I Am Legend, and Silver Linings Playbook.[18] He has had starring roles in independent features such as Telling You and Loveless in Los Angeles.

In 2006, Mihok appeared in the film Hollywoodland and in 2007 in the film, Firehouse Dog.

In 2008, he played Detective Martin Soap in the film Punisher: War Zone.

As part of the 2011 straight-to-video film, Lifted, Mihok and the actor who plays his son in the film, Uriah Shelton, recorded a song called "I Miss You." The film features many musical and dance performances by Mihok.[21]

In 2013, Mihok portrayed the character "Gage" in Payday 2 web series.

Since 2013, Mihok has co-starred as Brendan "Bunchy" Donovan in the Showtime drama Ray Donovan.[22][23] Bunchy has been sexually abused by a priest and is an alcoholic and suffers from sexual anorexia.[24][25] For the show the cast works out at the Santa Monica, California boxing gym Wild Card West with boxer Rob Garcia.[26]

In 2014, he portrayed Whelan, in the horror-thriller film, Before I Wake, co-starring in the Mike Flanagan-directed film Annabeth Gish, Thomas Jane and Kate Bosworth.[13][27][28]

In 2016, Mihok appeared in the film, So B. It, which stars Alfre Woodard, Cloris Leachman, Jacinda Barrett, and John Heard.[29]

In 2017, Mihok appears in the independent film, The Girl Who Invented Kissing, as Victor, a man who becomes mentally handicapped after being in a car accident. He stars opposite Suki Waterhouse and Vincent Piazza, who plays his younger brother.[30][31]

Also in 2017, Mihok plays a car salesman in the film Car Dogs, which features Patrick J. Adams, Octavia Spencer, Josh Hopkins, among others.[32]

When he was 12 years old, Mihok started a band with his friends which was called S.D.C. (Sam, Dash, Chris aka Strictly Devastating Crew).[33]

In 2004, Mihok appeared on Sicilian-Puerto Rican New York-based rapper Sabac Red's record Sabacolypse: A Change Gon' Come, on the track "I Have A Dream." The lyrics refer to tics that people exhibit as symptoms of Tourette syndrome.[34][35]

For the 2005 movie Green Street Hooligans, Mihok wrote the title track "Test of a Man." During this time he also collaborated with Daniel Freedman, a jazz drummer, percussionist, and composer on various music projects.[36]

Since 2015, Mihok has been in the band Diz and the Fam.[37][38] Members of Diz and the Fam are Mike Choi, Kenny Echizen, Justin Frazier, Sharlotte Gibson, Morris Hayes, Joel Hellman, Brett Nolan, and Elliot Yamin.[13] The band has released three singles.[36]

The 2015 video for Love (feat. Jeff Taylor) features many actors from Ray Donovan.[39]

Mihok studied dance. He can be seen dancing opposite then-girlfriend Alanis Morissette in her music video "So Pure".[40]

Mihok is a photographer as well. His photography of Morissette is used on the back cover of her "Thank U" single[41] and is credited for Supposed Former Infatuation Junkie.[42][43]

I’d say don’t be afraid to tell people about your TS ; don’t hide it. The stress of hiding it is too much. If you’re afraid that people won’t understand, then they probably won’t be in your life, anyway. Be as open as you can. It takes it off you and alleviates the worst of your TS. Don’t be afraid. You can do anything you want to do. If you think you can, you can. There are top neurosurgeons with TS. The sky is the limit. Don’t limit yourself.

—Dash Mihok, when asked what advice he'd give others with Tourette's[44]

Mihok was named after writer Dashiell Hammett, the author of The Thin Man, The Glass Key and The Maltese Falcon. His last name is usually mispronounced "me-Hawk," but he says the Czech surname is pronounced "my"-Hawk.[10]

Mihok was diagnosed with Tourette syndrome at age six,[45][46][47] and is a spokesperson and is on the board for the nonprofit Jaylens Challenge,[48] founded by the then 9-year old, Jaylen Arnold.[49]

Mihok is also an active supporter of the Tourette Syndrome Association.[44][50] Mihok's two older sisters both have Tourette's. Other family members also have the syndrome, as it is often genetic.[45]

Mihok said that one of the early reasons he became an actor was because he had so much experience in hiding his Tourette's.[46] He said the focus required of acting allows him to mask many of his tics.[46] Mihok says the biggest misconception about Tourette's Syndrome is about vocal tics, called coprolalia. Not everyone with Tourette's does that: "Tics tend to wax and wane, not everybody's screaming obscenities all the time."[3] Mihok said he took medication during high school for the Tourette's.[10]

In 1997, Mihok met Alanis Morissette through friend Leonardo DiCaprio during a trip to Cuba.[51] The lyrics to the songs "So Pure" from Supposed Former Infatuation Junkie and "That Particular Time" from Under Rug Swept are about him.[13]

In 2009, Mihok married singer Valeria Mason. They have two children and live in Los Angeles.[5] Mihok has said that he is Catholic.[13]

DIZ and The Fam

Report a problem
Write to Dash Mihok at FanPal • 2021