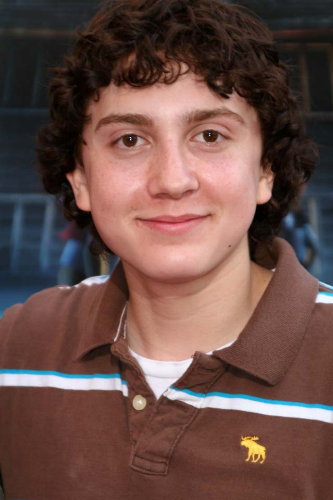 Daryl Christopher Sabara (born June 14, 1992) is an American actor, perhaps best known for playing Juni Cortez in the Spy Kids film series, as well as for a variety of television and film appearances, including Generator Rex, Wizards of Waverly Place, Father of the Pride, The Polar Express, Keeping Up with the Steins, Halloween, World's Greatest Dad, Grimm, and America's Most Talented Kids (on which he was a judge).

Sabara was born in Torrance, California, and was raised by his mother, Sandra "Sandy" (Krebs), a Los Angeles social worker. Daryl graduated from West Torrance High School in 2010.[1] He has a fraternal twin brother, Evan, who is also an actor. Sabara is Russian Jewish from his mother and Polish from his father. He had a Bar Mitzvah ceremony.[2][3] Sabara began performing with the regional ballet company, South Bay Ballet.[4]
Read more...

Sabara began acting during the mid-1990s, appearing on episodes of Murphy Brown, Life's Work, Will and Grace, and Friends before being cast as Juni Cortez in the Spy Kids series of family films, which became popular among pre-teen audiences.

Sabara provided the voice of Hunter in Father of the Pride. He has appeared in episodes of the television series Weeds, House, Dr. Vegas, and was one of the judges on America's Most Talented Kids. Sabara also voiced the main character, Hero Boy, in the 2004 animated version of The Polar Express. He then played a Jewish young boy trying to have a nice Bar Mitzvah in Keeping Up with the Steins (formerly known as Lucky 13), which received a limited release on May 12, 2006. He also guest starred in the Criminal Minds episode, "P911" where he played as a sexually molested child. He also provided the voice for Rex in Generator Rex.

He next appeared in the films Her Best Movie and the interactive DVD Choose Your Own Adventure, played Ben on The Last Chance Detectives radio dramas by Adventures in Odyssey and Focus on the Family,[5] and also appeared as school bully Wesley Rhoades in Rob Zombie's Halloween. He then played Irwin in the theater play The Catskills Sonata, about a young Jewish busboy in the late 1950s.

In 2003, Sabara made a guest appearance as the character Owen on an episode of Friends, during which Matthew Perry's character Chandler accidentally reveals to Owen that he is adopted.[6] He also gained a recurring role in the Disney Channel sitcom Wizards of Waverly Place as T.J. Taylor, a wizard who ignores the rules and uses magic the way he wants, often getting him into trouble. He was also in The Boondocks as the voice of Butch Magnus Milosevic in the episode Shinin'. He appeared in two episodes of The Batman first as Harris, a middle schooler then as Scorn, the sidekick of the villain Wrath. Both roles were opposite his brother, who played "Robin".

He costarred in the 2009 film April Showers, a movie written and directed by a survivor of the 1999 Columbine High School massacre. He played Kyle, a misanthropic teenager in World's Greatest Dad, with Robin Williams, and Peter Cratchit in the 2009 film adaptation of A Christmas Carol. He appeared in the comedy series Easy To Assemble, where he played a character named George. In 2010, he appeared in the movie Machete, as well as the MTV movie Worst. Prom. Ever. which premiered May 10. In 2012, he co-starred in John Carter as Edgar Rice Burroughs.

He portrayed the recurring role of Tim Scottson in seven episodes (spanning from 2005-2012) of Weeds.[7]

In 2014 he starred alongside Chloë Grace Moretz in the off-Broadway play The Library directed by Steven Soderbergh.[8][9][10]