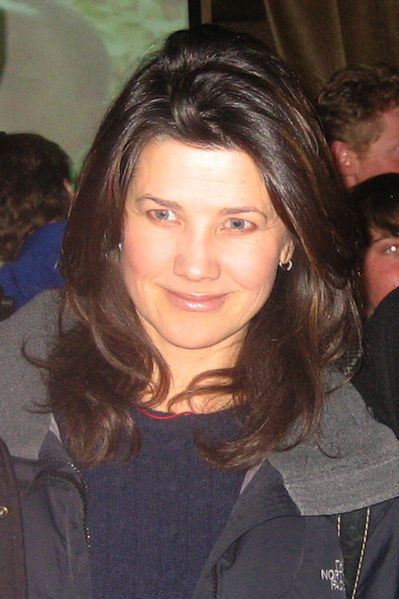 Daphne Eurydice Zuniga (/ˈdæfni zuːˈniːɡə/; born October 28, 1962) is an American actress and environmental activist. Born in San Francisco, Zuniga was raised between Berkeley, California and Reading, Vermont. In her youth, she studied at the American Conservatory Theater, and later enrolled at the University of California, Los Angeles, where she studied theater. She made her film debut in 1982 in the slasher film The Dorm That Dripped Blood at the age of 19, followed by a lead role in the horror film The Initiation (1984) two years later.

She went on to star in several comedies, including Rob Reiner's The Sure Thing (1985), opposite John Cusack, and the cult comedies Spaceballs, and Modern Girls (1986). She also starred opposite Lucille Ball in the television drama film Stone Pillow (1986), and in the science-fiction horror sequel The Fly II (1989). Zuniga later gained major exposure as a television actress for her role as Jo Reynolds on the Fox primetime soap opera Melrose Place from 1992-1996. Other television credits include as Victoria Davis on One Tree Hill (2008-2012), and as Lynn Kerr on the drama series Beautiful People.

Also an environmental activist, Zuniga was a founding member of the Earth Communications Office, and has worked with the Natural Resources Defense Council, the Waterkeeper Alliance, and Environment California.[2]

Zuniga was born in San Francisco, California,[3] to Agnes A. (née Janawicz) and Joaquin Alberto Zúñiga Mazariegos. Her mother is a Unitarian minister, of Polish and Finnish descent,[4] and her father, originally from Guatemala,[5] was an emeritus professor of philosophy at California State University, East Bay.[6][7] Zuniga has a sister, Jennifer Zuniga.

In her early teens, Zuniga expressed interest in acting, and attended the Young Conservatory program of the American Conservatory Theater of San Francisco. After her parents divorced, Zuniga moved with her mother and sister from Berkeley, California, to Reading, Vermont, where she spent the remainder of her teen years.[8] Zuniga graduated from Woodstock Union High School in Woodstock, Vermont, in 1980, after which she returned to California and enrolled at the University of California, Los Angeles to study theater arts. After leaving college, Zuniga was close friends and roommates with fellow actress Meg Ryan.[9]

Zuniga made her film debut in Stephen Carpenter's slasher film The Dorm That Dripped Blood (1982), playing a supporting role as a college coed. Two years later, she made her lead debut in The Initiation, another college-themed slasher co-starring Vera Miles and Clu Gulager.[10] "It was a great part," Zuniga recalled. "I got to play twins: a good sister and an evil sister. I got shot in the back on-screen. It was pretty heavy for a first role."[10]

She then appeared in the drama Vision Quest (1985), followed by a lead role in Rob Reiner's The Sure Thing (1985), opposite John Cusack.[11] The film was critically praised; critic Roger Ebert said of the film: "The movie industry seems better at teenage movies like Porky's, with its sleazy shower scenes, than with screenplays that involve any sort of thought about the love lives of its characters. That's why The Sure Thing is a small miracle."[12] Shortly after, Zuniga was cast in the television drama film Stone Pillow (1985), playing a social worker in New York City who forms a bond with an elderly homeless woman, played by Lucille Ball.[13] She also appeared in the comedy Modern Girls (1986), opposite Cynthia Gibb and Virginia Madsen.

In 1987, Zuniga was cast as Princess Vespa in Mel Brooks's cult comedy Spaceballs, opposite Rick Moranis, Bill Pullman, and John Candy. Though the film received mixed critical reception,[14] it later garnered a cult following. The next year, Zuniga appeared in a lead role in the blockbuster horror film The Fly II (1988), followed by the comedy Staying Together (1989), and as a med student opposite Matthew Modine in the drama Gross Anatomy (1989).

In 1992, she was cast as Jo Reynolds in the Fox soap opera Melrose Place, and appeared on the show as a recurring character until 1996. The role garnered Zuniga major exposure to television audiences, though her television career had begun in the early eighties with a minor role on Family Ties (1984) as a girlfriend of Alex P. Keaton.[15] She also appeared in the 1995 miniseries Degree of Guilt.[16]

In 1994, Zuniga appeared in the release of a video for Bob Seger's previously released 1976 hit "Night Moves".[17] In the video version of the song, she and a pre-Friends Matt LeBlanc are shown in a 1960s drive-in theater, where Zuniga as a dark, edgy young woman becomes a visual fascination for LeBlanc as a clean-cut young man. Later, Zuniga would work as a voice actor on the animated television series Stories from My Childhood (1998), and also had a lead role in the miniseries Pandora's Clock (1996), an action thriller filmed in Seattle, Washington.[18]

In 2005-2006, she was cast as Lynn Kerr on the ABC family series Beautiful People, and also had a recurring role in the series American Dreams.[19] She also appeared in a recurring role as Victoria Davis on The CW series One Tree Hill between 2008 and 2012, appearing in over forty episodes. During this time, she appears in several made-for-television movies including Secret Lives (2005), The Obsession (2006), Christmas Do-Over (2006), Mail Order Bride (2008), and On Strike for Christmas (2010).[20]

In 2007, Zuniga co-produced and co-directed (with Steven Latham) the documentary "The Future We Will Create: Inside the World of TED" — a look at the annual Technology, Entertainment and Design conference held in Monterey, California. She also starred in the scripted web series Novel Adventures, which premiered November 3, 2008 from CBS Interactive.[21][22] In February and March 2008, Zuniga appeared onstage in a production of The Scene by Theresa Rebeck, at the San Francisco Playhouse.[23]

Zuniga reprised her role as Princess Vespa from the 1987 film Spaceballs, by voice-over in the television spin-off Spaceballs: The Animated Series. She also reprised her role from Melrose Place in an updated version, but it was short-lived, as the series was cancelled after just one season in 2009-10. She starred in 2010 in the hit Hallmark Channel film A Family Thanksgiving. In 2013, Zuniga appeared as a postal worker in the Hallmark Channel series Signed, Sealed, Delivered, as well as the television film based on the series and in Gone Missing with Lauren Bowles.

Zuniga appeared in a guest starring role in the VH1 scripted series Hindsight as Libby.[24] In 2016, she was cast in a new TV movie for Hallmark Channel, When Duty Calls, with Judd Nelson and Daniella Monet.

Her younger sister Jennifer Zuniga, also an actress, debuted in the film A Woman, Her Men, and Her Futon (1992). Zuniga attends private Buddhist meditation retreats to manage stress in her life.[15]

In 2004, Zuniga suffered from mercury poisoning, which she attributed to overconsumption of fish. She said she had eaten sushi four times in the week prior to being taken to the emergency room and that her symptoms included weak memory, headaches, crying spells, skin rashes, and mild depression.[25] After her diagnosis, Zuniga stopped consuming fish in addition to other meat.[15]

Zuniga was a founding member of the Earth Communications Office (ECO), and has worked with the Natural Resources Defense Council, the Waterkeeper Alliance, and Environment California.[2] Zuniga has cited her family's camping trips to Yosemite National Park and Yellowstone as sparking her lifelong interest in the environment.[28] "The planet does nothing but support us," she said in a 2007 interview, "and we are constantly committing crimes against nature."[15]