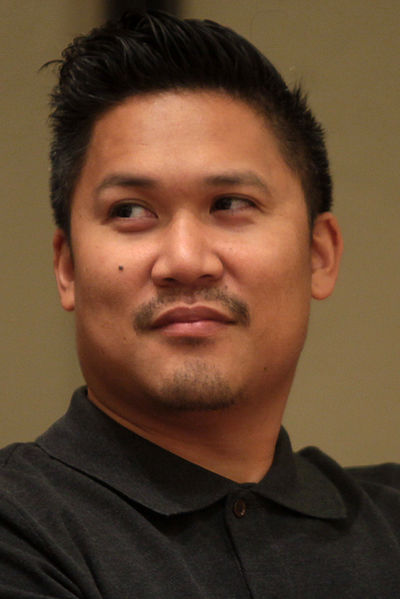 Dante R. Basco (born August 29, 1975)[1] is an American actor, dancer and voice actor. He is known for his voice-over work in films, TV shows and video games as well as his role as Rufio, leader of the Lost Boys in the 1991 movie Hook.

Dante Basco is a Filipino American born in Pittsburg, California and raised in Cerritos and Paramount, California. He has four siblings, including actor Dion Basco.[2] . In Dante's early years, he was part of the Streat Freaks breakdancing crew. When he got into acting, he started taking on minor roles in television. Basco's breakout performance was when he appeared as the leader Rufio of the Lost Boys in Steven Spielberg's 1991 film Hook with Robin Williams and Dustin Hoffman.[3] A punk band is later named after this character. He attended Orange County High School of the Arts[4] in the Music and Theatre Conservatory and graduated in 1993.

Basco had guest roles on television shows The Fresh Prince of Bel-Air and Hangin' with Mr. Cooper, and had a recurring role on Moesha. After portraying characters of various Asian ethnicity except his own, he portrayed a Filipino American alongside his three brothers and sister in the independent film The Debut. He and his brothers starred in the sitcom Naked Brown Men. He played a gay teenager in the 1999 film But I'm A Cheerleader.[5] He starred as breakdancer Ramos in the 2006 film Take the Lead alongside Antonio Banderas. In many films, he hip-hop dances as he did in a Verizon Wireless commercial, as well as rapping and breaking in a Sprite commercial. He produced and co-starred in a music video parody of the song "Rehab" called "Wiihab".

Basco has done voice acting for many animated productions, including Zuko in Avatar: The Last Airbender and Jake Long in American Dragon: Jake Long. He also voice acted Quoc Wong from The Proud Family[6] He voiced Matt Martin/Kewl Breeze in the short-lived animated series Zevo-3, several voices in the video game Saints Row and Shingo in the video games Skate, Skate 2, and Skate 3. He also voiced Seeing Farther in the video game Call of Juarez: Bound in Blood, the Asmodian male youth voice for the MMORPG game Aion: Tower of Eternity, and Iroh II in The Legend of Korra.[7]

Basco also provided additional voice over work for Avatar: The Last Airbender, and the games Scarface: The World Is Yours, Aion, Aion: Upheaval and Mortal Kombat X. In June 2017, he agreed with Jonah Feingold to work on a new film together, Bangarang, about the character Rufio. The development of the project started with a Kickstarter campaign.[8]