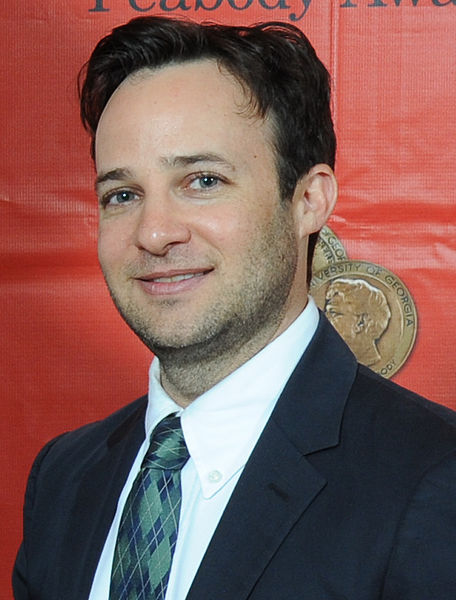 Daniel W. Strong (born June 6, 1974) is an American actor, screenwriter, television director, film director, and producer. As an actor, Strong is best known for his roles as Jonathan Levinson in Buffy the Vampire Slayer and Doyle McMaster in Gilmore Girls. He also wrote the screenplays for Recount, the HBO adaptation Game Change, Lee Daniels' The Butler, and the two-part finale of The Hunger Games film trilogy, Mockingjay - Part 1 and Mockingjay - Part 2. Strong also is a co-creator, executive producer, and writer for the Fox series Empire.

Strong grew up in Manhattan Beach, California. He was raised in a Jewish family of Lithuanian, Russian, and Polish origin.[1] He began acting at a young age. As a child, Strong rented videos from Video Archives and became friends with Quentin Tarantino, who worked there as a clerk. "I would just literally sit and chat with him for 45 minutes, an hour at a time about movies, and he got me turned on to all these different movies that 10-year-olds don't see."[2] Strong attended Mira Costa High School, and then studied film and theatre at the University of Southern California.[3]
Read more...

Strong is known for playing Jonathan Levinson on the television series Buffy the Vampire Slayer and Paris Geller's boyfriend Doyle McMaster on Gilmore Girls, but he has also appeared in films such as Pleasantville, Dangerous Minds, Seabiscuit, the spoof Shriek If You Know What I Did Last Friday The Thirteenth, and was in the film Sydney White as the Grumpy dork, Gurkin. Strong has also had guest parts in sitcoms such as Seinfeld, Clueless, 3rd Rock from the Sun, Over the Top, Grey's Anatomy and How I Met Your Mother and has also guest-lectured in acting classes on finding a job as an actor. Most recently, Strong appeared in the popular AMC series Mad Men as Danny Siegel, a young man with no talent, trying to break into the advertising industry, later making a career in Hollywood. Strong also appeared on the HBO series Girls in the third and fourth seasons; and appeared on the fifth and sixth seasons of Justified as Albert Fekus, a rapist prison guard. He is currently starring in Billions as Todd Krakow, Secretary of the Treasury.

At 25, in the hopes of being the lead actor in his own film, Strong wrote a dark comedy about two men who kill an elderly man for his rent-controlled apartment.[4] The film never materialized, but it sparked his desire to become a full-time writer.[4] His first successful script was Recount, a film about the 2000 US Elections, produced by HBO and directed by Jay Roach.[5] The film starred Kevin Spacey, Laura Dern, Denis Leary, John Hurt and Tom Wilkinson and premiered on May 25, 2008.[6] The script had been voted number one on the 2007 Hollywood Black List,[7] a list of the "most liked" but unproduced scripts as voted on by the Hollywood community and insiders.[8] Strong was nominated for a 2008 Emmy Award for Primetime Emmy Award for Outstanding Writing for a Miniseries, Movie or a Dramatic Special for Recount. The film was nominated for Best Television Miniseries or Film at the 66th Golden Globe Awards and won a Primetime Emmy Award for Outstanding Made for Television Movie as well as the Writers Guild of America Award for Best Original Screenplay for a Television movie.[9]

Strong followed up Recount with the 2012 film adaptation of Game Change, based on the book written by John Heilemann and Mark Halperin.[10] The film starred Julianne Moore and aired on HBO on March 10, 2012.[11] In 2012, he won a Primetime Emmy Award for Outstanding Writing for a Miniseries, Movie or a Dramatic Special for Game Change.[12] The film was also awarded a Peabody Award, which recognizes distinguished and meritorious public service by radio and television stations, networks, producing organizations and individuals.[13]

In February 2012, he was hired to write the screenplay for the film adaptation of Dan Brown's The Lost Symbol, whose production has been stalled since 2013.[14][15]

Strong wrote the screenplay for the film The Butler.[16] Oprah Winfrey and Forest Whitaker starred in the film and it was directed by Lee Daniels.[17] The script was voted on to the 2010 Hollywood Black List.[18] It was released in August 2013 and grossed over $100 million in the US box office.[19] He also had a cameo in the film.

I write characters of every race, gender and sexual orientation. I write some characters that are animals. That's just my job. To me, writing 'Empire' is not more difficult than Sarah Palin . ... I mean, I'm not a Republican from Alaska.

In December 2013, Strong signed on to pen the new screenplay for the film adaptation of the musical Guys and Dolls, which originally premiered on Broadway in 1950.[20]

Strong also co-created the TV series Empire with Daniels in 2014, for which he has written and directed multiple episodes.[21]

Strong made his directorial debut with the biographical film on the life of author J. D. Salinger, Rebel in the Rye.[25]

Report a problem
Write to Danny Strong at FanPal • 2021