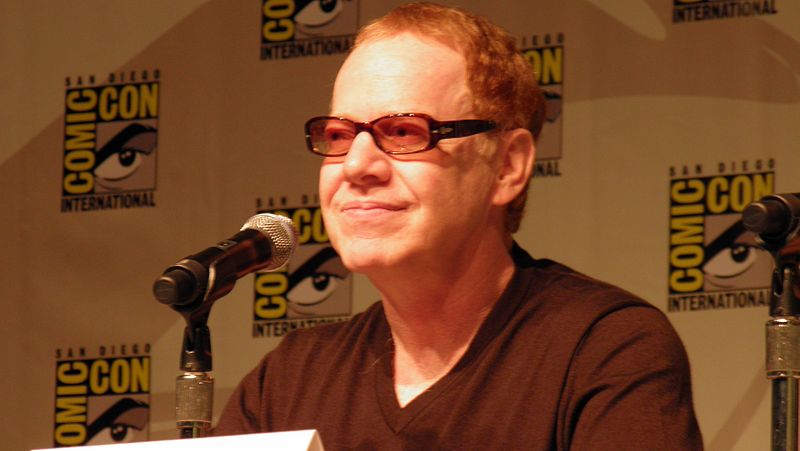 Daniel Robert Elfman (born May 29, 1953) is an American composer, singer, songwriter, and record producer. Elfman first became known for being the lead singer and songwriter for the band Oingo Boingo from 1974 to 1995. He is well known for scoring films and television shows, particularly his frequent collaborations with director Tim Burton.

In 1976, Elfman entered the film industry as an actor. In 1980, he scored his first film, Forbidden Zone, directed by his older brother Richard Elfman. Among his honors are four Oscar nominations, a Grammy for Batman,[4] an Emmy for Desperate Housewives,[5] six Saturn Awards for Best Music, the 2002 Richard Kirk Award,[6] and the Disney Legend Award.[7]

Danny Elfman was born on May 29, 1953[8] in Los Angeles, California to a Jewish family[9] of Polish and Russian ancestry.[10] He is the son of Blossom Elfman (née Bernstein), a writer and teacher, and Milton Elfman, a teacher who was in the Air Force.[11] He was raised in a racially mixed affluent community in Baldwin Hills, California.[12] He spent much of his time in the neighborhood's local movie theater, adoring the music of such film composers as Bernard Herrmann and Franz Waxman. Stating that he hung out with the "band geeks" in high school, he started a ska band. After dropping out of high school, he followed his brother Richard to France,[13] where he performed with Le Grand Magic Circus, an avant-garde musical theater group.

He was never officially a student at the CalArts, but an instructor there encouraged him to continue learning. Elfman stated, "He just laughed, and said, 'Sit. Play.' I continued to sit and play for a couple years."[14] At this time, his brother Richard was forming a new musical theater group.[15]

In 1972 Richard Elfman founded the American new wave band/performance art group, originally called The Mystic Knights of the Oingo Boingo. They played several shows throughout the 1970s until Richard Elfman left the band to become a filmmaker. As a send-off to the band's original concept, Richard Elfman created the film Forbidden Zone based on their stage performances. Danny Elfman composed his first score for the film and played the role of Satan (the other band members played his minions). By the time the movie was completed, they had taken the name Oingo Boingo and begun recording and touring as a rock group. From 1976 and on, it was led by Danny Elfman, until 1995 when they suddenly retired. The semi-theatrical music and comedy troupe had transformed into a ska-influenced new wave band in 1979, and then changed again towards a more guitar-oriented rock sound, in the late 1980s.[citation needed]. Oingo Boingo, still led by Danny Elfman, performed as themselves in the 1986 movie Back to School. Additionally, Danny Elfman and Oingo Boingo guitarist Steve Bartek reunited on October 31, 2015 to perform the song "Dead Man's Party" – "for the first time in 20 years to the day", as Elfman said to the audience – during an encore at a Halloween celebration at the Hollywood Bowl.[16]

In 1985, Tim Burton and Paul Reubens invited Elfman to write the score for their first feature film, Pee-wee's Big Adventure. Elfman was apprehensive at first, because of his lack of formal training, but with orchestration assistance from Oingo Boingo guitarist and arranger Steve Bartek, he achieved his goal of emulating the mood of such composers as Nino Rota and Bernard Herrmann.[17] In the booklet for the first volume of Music for a Darkened Theatre, Elfman described the first time he heard his music played by a full orchestra as one of the most thrilling experiences of his life. Elfman immediately developed a rapport with Burton[17] and has gone on to score all but three of Burton's major studio releases: Ed Wood, which was under production while Elfman and Burton were having a serious disagreement,[18] Sweeney Todd and, most recently, Miss Peregrine's Home for Peculiar Children. Elfman also provided the singing voice for Jack Skellington in Tim Burton's The Nightmare Before Christmas and the voices of both Barrel and the "Clown with the Tear-Away Face". In 1990, Elfman composed the iconic orchestra piece, "Ice Dance", for the Tim Burton film Edward Scissorhands. Years later he provided the voice for Bonejangles the skeleton in Corpse Bride and the voices of the Oompa-Loompas in Charlie and the Chocolate Factory.

One of Elfman's notable compositions is The Simpsons theme, which he wrote in 1989.

In October 2013, Elfman returned to the stage to sing his vocal parts to a handful of Nightmare Before Christmas songs as part of a concert titled Danny Elfman's Music from the Films of Tim Burton.[19][20] He composed the film score for Oz the Great and Powerful (2013), and composed additional music for Avengers: Age of Ultron (2015) together with Brian Tyler.

Elfman's film scores were featured in the 2017 production SCORE: A Film Music Documentary. Also that year, he took over the place of composer in the DCEU's Justice League.

In 2004 Elfman composed Serenada Schizophrana for the American Composers Orchestra. It was conducted by John Mauceri on its recording and by Steven Sloane at its premiere at Carnegie Hall in New York City on February 23, 2005. After its premiere, it was recorded in studio and released onto SACD on October 3, 2006. The meeting with Mauceri proved fruitful as the composer was encouraged then to write a new concert piece for Mauceri and the Hollywood Bowl Orchestra. Elfman composed an "overture to a non-existent musical" and called the piece "The Overeager Overture".

2017 saw the premiere of his 40-minute Concerto for Violin & Orchestra ('Eleven Eleven') in Prague, with soloist Sandy Cameron (for whom it was written) and conducted by John Mauceri with the Czech National Symphony Orchestra. It was jointly commissioned by Prague Proms, Stanford Symphony and the Royal Scottish National Orchestra and has subsequently been performed in Germany and the US, with further dates planned. A 4-movement, 21-minute Piano Quartet was premiered by the Berlin Philharmonic Piano Quartet as part of their US tour in 2018. Elfman continues to compose his film scores in addition to these other projects.

In November 2010, it was reported that Danny Elfman was writing the music for a planned musical based on the life of Harry Houdini,[22] but, as of January 2012[update], he was no longer attached to the project.[23]

In October 2016, Elfman composed a horror score for when Donald Trump "loom" behind Hillary Clinton at the second United States presidential election debates, 2016.[25][26]

The style of Elfman's music has been influenced by modern composers including Béla Bartók, Philip Glass, Lou Harrison, Carl Orff, Harry Partch, Sergei Prokofiev, Maurice Ravel, Erik Satie, Igor Stravinsky, as well as Romantic composer Pyotr Ilyich Tchaikovsky.[27] Elfman has said that the first time he noticed film music was when he heard Bernard Herrmann's score to The Day the Earth Stood Still as an eleven-year-old; afterwards he became a fan of film music. Elfman's influences in film music include the work of Erich Wolfgang Korngold, Max Steiner, David Tamkin, Franz Waxman,[27][28] and Nino Rota, who served as a significant influence and the main inspiration for Elfman's score for Pee-wee's Big Adventure.[28] Elfman's work in pop music was influenced by The Specials, Madness, the Selecter, and XTC.[29]

As a teenager, Elfman dated his classmate Kim Gordon, who would later become one of the members of the rock band Sonic Youth.[30]

He is the uncle of actor Bodhi Elfman, who is married to actress Jenna Elfman.[34]

Elfman has been an atheist since the age of 11 or 12. According to him, he is a cynicologist.[34]

Describing his politics during the 1980s, Elfman said, "I'm not a doomist. My attitude is always to be critical of what's around you, but not ever to forget how lucky we are. I've traveled around the world. I left thinking I was a revolutionary. I came back real right-wing patriotic. Since then, I've kind of mellowed in between."[35] In 2008, he expressed support for Barack Obama and said that Sarah Palin was his "worst nightmare".[36]

During the 18 years with Oingo Boingo, Elfman developed significant hearing damage as a result of the continuous exposure to the high noise levels involved in performing in a rock band. Afraid of worsening his condition, he decided to leave the band, saying that he would never return to that kind of performance. His impairment was so bad that he could not "even sit in a loud restaurant or bar anymore." However, he found performing in front of orchestras more tolerable, and returned several times to reprise his live performance of Jack Skellington.[37][38][39]

Elfman's scores for Batman and Edward Scissorhands were nominated for AFI's 100 Years of Film Scores.