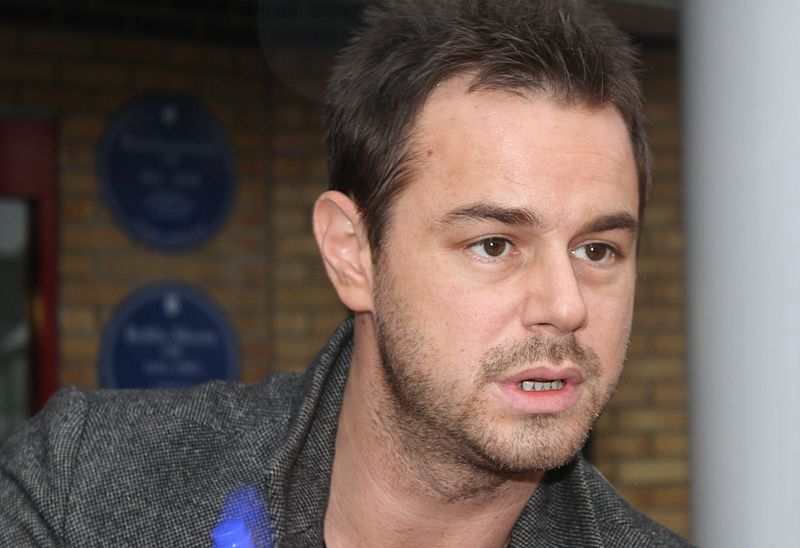 Daniel John Dyer[a] (born 24 July 1977) is an English actor who has worked in television, film and theatre. Dyer's breakthrough role was as Moff in Human Traffic, with other notable roles as Billy the Limpet in Mean Machine, and as Tommy Johnson in The Football Factory. Following the success of The Football Factory, Dyer was often typecast in "hard-man" roles, although it was this image that allowed him to present The Real Football Factories, its spin-off, The Real Football Factories International and Danny Dyer's Deadliest Men. Dyer has also worked in theatre, having appeared in three plays written by Harold Pinter, with whom he had a close friendship.

In 2013, he was announced as the latest addition to the cast of EastEnders, playing Mick Carter, the most recent landlord of The Queen Victoria. He had previously turned down a role in 2009, and in his autobiography, Straight Up, said that he would not join the cast until he was "fat, bald and fifty".[3] He won the Serial Drama Performance award at the National Television Awards in 2015,[4][5] and again in 2016.[6]

His screen and stage career, which spans more than two decades, has met with ridicule from critics;[8] Stuart Heritage in The Guardian wrote that Dyer "has become the byword for low-budget, no-quality Brit-trash cinema".[9]

Dyer was discovered at a local school by an agent who auditioned him for the part of Martin Fletcher in the Granada Television series Prime Suspect 3 (1993), beginning his acting career at 16.[10]

His many other television roles include appearances in the 2003 Channel 4 drama Second Generation, directed by John Sen;[11] as Malcolm, main character Michelle's stepfather, in Skins;[12] as a football player in the second series of Hotel Babylon; and as Matt Costello in what was supposed to be the pilot episode for Breathless,[11][13] a BBC two-part television series in development from BBC Northern Ireland, renamed first "Blood Rush" and then Kiss of Death, when it premiered on BBC One as a one-part drama on 26 May 2008.[14]

Beginning in 2007, Dyer became the presenter of The Real Football Factories and The Real Football Factories International, a TV documentary series on Bravo, for which he travels, in the former throughout the United Kingdom and in the latter throughout the world, to meet and interview football club fans and hooligans. In Danny Dyer's Deadliest Men, "a gritty and hard-hitting documentary series that sees him venturing into the dark depths of the British underworld and hunting down some of the most notorious and feared men in Britain today", began airing on Bravo in the United Kingdom on 20 October 2008.[15][16]

In April 2009, he turned down a role in EastEnders, claiming that although he thought the role sounded good, he did not think he could cope with the pressure.[17]

On 1 October 2013, the BBC announced that Dyer had been cast in EastEnders from Christmas 2013, as Mick Carter, the new landlord of The Queen Victoria pub.[18]

In February 2017 it was announced that Dyer would be taking a "short break" from EastEnders.[19]

In June 2018, Dyer appeared as a guest panelist on Good Evening Britain, a one-off spin-off show of Good Morning Britain, to discuss Britain's exit from the European Union. Dyer described it as a "mad riddle that no one knows what it is" and called the former Prime Minister of the United Kingdom, David Cameron, a "twat".[20]

In 2008, he finished filming his roles as Pete and Tom in City Rats and 7 Lives, respectively.[23] April 2009 saw the straight to DVD release of City Rats. Later that year, Dyer completed filming on Jack Said, a Brit noir thriller in which he played Nathan alongside Ashlie Walker, Terry Stone, David O'Hara and Simon Phillips, which was released in November 2009. This film is the prequel to Jack Says, which was released in 2008, and starred Mike Reid.

In 2009, he shot several horror films including Doghouse under the direction of Jake West, and Basement under the direction of Asham Kamboj.[24] He played one of the lead roles in the British vampire film Dead Cert.[25] In June 2010, he was cast for the lead role in the remake of the British horror film The Asphyx,[26] but it failed to secure production finance and was indefinitely shelved. Dyer co-starred with Anna Walton in Deviation, a British dark thriller written and directed by J. K. Amalou.[27]

In 2012, Dyer played the lead role in Ray Cooney's Run For Your Wife. Upon release in 2013, it was savaged by critics, who described it as one of the worst British films of all time. The film took in a mere £747 during its opening weekend.[28]

Dyer has performed on stage, most notably in two plays written and directed by 2005 Nobel Laureate Harold Pinter: as the Waiter in the London première of Celebration (2000), at the Almeida Theatre, which transferred to Lincoln Center for the Performing Arts, in New York, as part of the Harold Pinter Festival held there in July and August 2001;[29] and as Foster in the revival of No Man's Land (1975), at the Royal National Theatre, in London, during 2001 and 2002.[30][31] In March 2008, he played Joey in a revival of Pinter's The Homecoming (1964), directed by Michael Attenborough, at the Almeida Theatre, in London.[32] He also performed in Peter Gill's play Certain Young Men (1999) in London.[33]

From 9 September 2009 to 3 October 2009, Dyer appeared as Sid Vicious in a new play called Kurt and Sid in London's West End at the Trafalgar Studios.

I Believe in UFOS: Danny Dyer, a documentary that sees Dyer journey to various "UFO hotspots" in the UK and the US in hope of experiencing a UFO sighting, was broadcast on BBC Three on 26 January 2010.[35]

Dyer was born in Custom House, London,[2] to Antony and Christine Dyer.[10] He now lives in Debden, Epping Forest, Essex,[37] with his wife Joanne Mas and their three children. During March 2015, Mas proposed to Dyer,[38] and the couple married on 3 September 2016.[39] In June 2017, it was reported that Dyer had a "six week affair" with Sarah Harding.[40] From June to July 2018, Dyer's eldest daughter Dani Dyer appeared in and eventually won as a contestant alongside her now boyfriend, Jack Fincham, on the popular ITV2 reality dating series Love Island.

Dyer has been outspoken about his use of drugs, in his autobiography he states: "I've always taken drugs and I probably always will, but there's a difference between having the odd crafty bump up the snout as a reward for a job well done and letting it rule your life."[41] He has argued for cocaine to be legalised because he argues banning it has "not worked".[42]

A lifelong player and follower of football, Dyer is a West Ham United fan. In late December 2007, he became the chairman of Kent League's Greenwich Borough F.C. in South East London, appointed by fellow actor Tamer Hassan, president of the football club, stating: "I just love football and the chance of being involved with a club is like a dream come true."[43] The appointment was actually a publicity stunt to raise the profile of the club.[44]

In 2016, Dyer travelled to Sierra Leone to take part in Sport Relief. Dyer said "I don't know what to expect when I go over there, but I'm hoping that it will make some kind of difference. It's an honour to be asked."[45]

Dyer's ancestors were the subject of an episode of Who Do You Think You Are?, a BBC documentary that looks into the family history of celebrities.[46] Research revealed that his family hails from the Poplar area.[47] Census records showed many of them working in the manual occupations connected to the docks on the River Thames.[48] Tracing his ancestors even further back, research found that his 15× great grandfather was Thomas Cromwell.[47] His 14× great grandmother was Elizabeth Seymour, the sister of Jane Seymour, who was Henry VIII’s third wife and Queen. Elizabeth married Cromwell’s son, Gregory Cromwell and, with the Seymour family’s assertion to be descended from Edward III (his 22× great grandfather), the line stretches back to William the Conqueror, and therefore Rollo.[47]

Dyer in 2011 released his autobiography Straight Up and in 2016 The World According to Danny Dyer: Life Lessons from the East End.

In 2010, Dyer wrote in Zoo, in his capacity as a celebrity agony uncle, that a young male reader could get over his recent break-up with a woman by "going on a rampage with the boys" or to "cut your ex's face, and then no one will want her ...". The comment was widely panned in the British media and by members of the public, including the chief executive of the Fawcett Society Ceri Goddard. Dyer for his own part claimed that he was misquoted.[49]

Dyer was quoted in a May 2011 article in NME as wanting to headbutt film critic Mark Kermode.[50] Kermode has been a regular critic of Dyer's output and often impersonates him on his BBC Radio 5 Live show with Simon Mayo.[51]

Report a problem
Write to Danny Dyer at FanPal • 2022