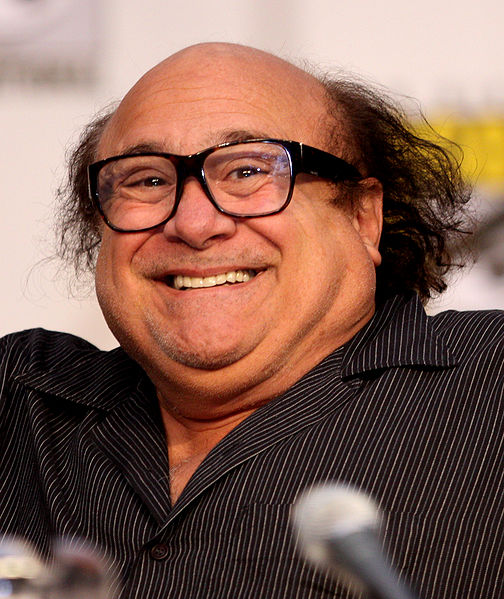 Daniel Michael DeVito Jr. (born November 17, 1944) is an American actor and filmmaker. He gained prominence for his portrayal of the taxi dispatcher Louie De Palma in the television series Taxi (1978-1983), which won him a Golden Globe and an Emmy.

A major film star, he is known for his roles in Tin Men, Throw Momma from the Train, One Flew Over the Cuckoo's Nest, Ruthless People, Man on the Moon, Terms of Endearment, Romancing the Stone, Twins, Batman Returns, Look Who's Talking Now, Big Fish, Other People's Money, Get Shorty, Be Cool and L.A. Confidential, and for his voiceover in such films as Space Jam, Hercules and The Lorax.

DeVito and Michael Shamberg founded Jersey Films. Soon afterwards, Stacey Sher became an equal partner. The production company is known for films such as Pulp Fiction, Garden State, and Freedom Writers. DeVito also owned Jersey Television, which produced the Comedy Central series Reno 911!. DeVito and wife Rhea Perlman starred together in his 1996 film Matilda, based on Roald Dahl's children's novel. DeVito was also one of the producers nominated for an Academy Award for Best Picture for Erin Brockovich.

He stars as Frank Reynolds on the FX and FXX sitcom It's Always Sunny in Philadelphia. He directed, produced and appeared in graphic, short, horror films for his Internet venture The Blood Factory.[2]

DeVito's short stature is the result of multiple epiphyseal dysplasia (Fairbank's disease), a rare genetic disorder that affects bone growth in those afflicted.[3][4]

DeVito was born in Neptune Township, New Jersey, the son of Daniel DeVito Sr., a small business owner, and Julia DeVito (née Moccello).[5][6] He grew up in a family of five, with his parents and two older sisters.[7] He is of Italian descent; his family is originally from San Fele, Basilicata.[8] He was raised in Asbury Park, New Jersey.[9]

DeVito was raised as a Catholic and attended Oratory Preparatory School, a boarding school in Summit, New Jersey, graduating in 1962. He went to the boarding school when he was 14 after he persuaded his father to send him there to keep him out of trouble.[7] After leaving the boarding school, he trained at the American Academy of Dramatic Arts, from which he graduated in 1966. In his early theater days, he performed with the Colonnades Theater Lab, at the Eugene O'Neill Theater Center in Waterford, Connecticut, and, along with his future wife, Rhea Perlman, appeared in plays produced by the Westbeth Playwrights Feminist Collective.

DeVito at the San Diego Comic-Con International in July 2010

DeVito played Martini in the 1975 film One Flew Over the Cuckoo's Nest, reprising his role from the 1971 off-Broadway play of the same title. He gained fame in 1978 playing Louie De Palma, the short but domineering dispatcher for the fictional Sunshine Cab Company, on the hit TV show Taxi. After Taxi ended, DeVito began a successful film career, starting with roles in 1983's Terms of Endearment, as the comic rogue in the romantic adventure Romancing the Stone, starring Michael Douglas and Kathleen Turner, and its 1985 sequel, The Jewel of the Nile. In 1986, DeVito starred in Ruthless People with Bette Midler and Judge Reinhold, and in 1987, he made his feature-directing debut with the dark comedy Throw Momma from the Train, in which he starred with Billy Crystal and Anne Ramsey. Two years later, DeVito reunited with Douglas and Turner in The War of the Roses, which he directed and in which he co-starred.

DeVito's work during this time includes Other People's Money with Gregory Peck, director Barry Levinson's Tin Men as a competitive rival salesman to Richard Dreyfuss' character, two co-starring vehicles with Arnold Schwarzenegger (the comedies Twins and Junior), and playing The Penguin as a deformed sociopath in director Tim Burton's Batman Returns (1992) as well in the 1996 film adaptation Matilda in which he played the villainous car dealer and Matilda's father Harry Wormwood.

Although generally a comic actor, DeVito expanded into dramatic roles with The Rainmaker (1997), Hoffa (1992), which he directed and in which he co-starred with Jack Nicholson, Jack the Bear (1993), L.A. Confidential, The Big Kahuna, and Heist (2001), as a gangster nemesis of Joe Moore (Gene Hackman).

DeVito has an interest in documentaries: In 2006, he began a partnership with Morgan Freeman's company ClickStar, on which he hosts a documentary channel called Jersey Docs. He was also interviewed in the documentary Revenge of the Electric Car, about his interest in and ownership of electric vehicles.

In April 2012, DeVito made his West End acting debut in a revival of the Neil Simon play The Sunshine Boys as Willie Clark - alongside Richard Griffiths.[10] The play previewed at the Savoy Theatre in London from 27 April 2012, opened on 17 May and played a limited 12-week season until 28 July.[11]

DeVito made his Broadway debut in a Roundabout Theatre Company revival of the Arthur Miller play The Price as Gregory Solomon, for which he was nominated for a Tony Award. The production began preview performances at the American Airlines Theatre on February 16, 2017 and opened on March 16 for a limited run through May 7.

DeVito has become a major film and television producer. Through Jersey Films, he has produced many films, including Pulp Fiction, Get Shorty, Erin Brockovich (for which he received an Academy Award nomination for Best Picture), Gattaca, and Garden State. In 1999, DeVito produced and co-starred in Man on the Moon, a film about the unusual life of his former Taxi co-star, Andy Kaufman, who was played in the film by Jim Carrey. DeVito also produced the Comedy Central series Reno 911!, as well as the film spin-off Reno 911!: Miami.[citation needed]

DeVito with It's Always Sunny in Philadelphia cast mates Kaitlin Olson and Rob McElhenney at the ceremony for DeVito on August 18, 2011

In 1977, DeVito played the role of John 'John John the Apple' DeAppoliso in the Starsky and Hutch episode titled "The Collector".[10] In 1986, DeVito directed and starred in an episode of Steven Spielberg's Amazing Stories. In the black comedy episode from season two, titled "The Wedding Ring", DeVito acquires an engagement ring for his wife (played by his real-life wife, actress Rhea Perlman). When the ring is slipped on his wife's finger, she becomes possessed by the ring's former owner, a murderous black widow.

In 1986, DeVito voiced the Grundle King in My Little Pony: The Movie while his wife, Rhea Perlman, voiced Reeka the witch. In 1990, DeVito and Perlman played a couple (Vic & Paula) commenting on the state of the environment in The Earth Day Special. In 1991 and 1992, DeVito voiced Herb Powell in the episodes "Brother, Can You Spare Two Dimes?" and "Oh Brother, Where Art Thou?" of The Simpsons.[15][16] In 1996, he provided the voice of Mr. Swackhammer in Space Jam. In 1997, he was the voice of Philoctetes in the film Hercules.

In 1999, DeVito hosted the last Saturday Night Live episode before the year 2000. He earned a 2004 Emmy nomination for Outstanding Guest Actor in a Comedy Series for an episode of Friends,[17] following four Emmy nominations (including a 1981 win) for Outstanding Supporting Actor in a Comedy for Taxi. In 2006, DeVito joined the cast of It's Always Sunny in Philadelphia as Frank Reynolds.

In 2011, he received a star on the Hollywood Walk of Fame for his work in television.[18] In 2012, DeVito voiced the Lorax in The Lorax. In 2013, along with Rashida Jones, he voiced Herb for the third time on "The Changing of the Guardian" episode of The Simpsons (aired on January 27, 2013. season 24, episode 11). He appeared in the Angry Birds Friends Champions for Earth tournament advertisement in September 2015. Following the Japanese release of the Nintendo 3DS game Detective Pikachu, dedicated Pokémon fans started a petition requesting DeVito as the English voice actor for the titular character. The petition gained 40,000 signatures, but he declined to audition for the role, making a comment implying that he is unfamiliar with the popular franchise.[19][20]

Appearances in other media

DeVito played a fictional version of himself in the music video for One Direction's song "Steal My Girl".[21][22] He also appeared in the short film Curmudgeons[23] which he has also produced and directed.

Throughout their relationship, Perlman and DeVito have acted alongside each other several times, including in the television show Taxi and the feature film Matilda (in which they played Matilda's parents).[27] While DeVito and Perlman separated in October 2012 after 30 years of marriage and over 40 years together,[27] the couple reconciled in March 2013.[28] The couple later separated for a second time in March 2017.[29] Although the two no longer lived together, they remained on amicable terms and Perlman had no intent of filing for divorce.[30] In March 2018, Radar Online reported that DeVito and Perlman had reconciled once more and were planning on renewing their wedding vows.[31]

DeVito and Perlman resided in a 14,579 square foot (1,354 m²) Beverly Hills, California mansion they purchased in 1994, until selling the estate for US$24 million in April 2015. The couple also own a bungalow near Rodeo Drive in Beverly Hills, and a multi-residence compound on Broad Beach in Malibu.[32][33]

He and Perlman are members of the steering committee of the Friends of the Apollo, supporting a theater in Oberlin, Ohio, as was filmmaker Jonathan Demme.[34] DeVito co-owned a restaurant called DeVito South Beach in Miami Beach, Florida, which closed in 2011.[35]

In March 2016, DeVito endorsed democratic socialist Bernie Sanders for President.[36][37] In July 2016, he endorsed Jeremy Corbyn's 2016 campaign in the Labour Party leadership election.[38] In May 2017, before the 2017 UK general election, DeVito said of Corbyn: "I like the idea of people telling the truth. I like them to get to the bottom of things, really." He endorsed Corbyn as Prime Minister saying he is "way better than Cameron" and Tony Blair, whom he called "that sketchy guy that hung out with Bush".[39]

DeVito has amassed a formidable and versatile body of work as an actor, producer and director that spans the stage, television and film. As such he has received recognition from the Academy awards, Creative Arts Emmy awards, Golden Globe awards, Primetime Emmy awards, Producers Guild awards, Screen Actors Guild awards, and Tony awards. He was honored with his star on the Hollywood Walk of Fame in 2011, for his contribution to Television located at 6909 Hollywood, Blvd.