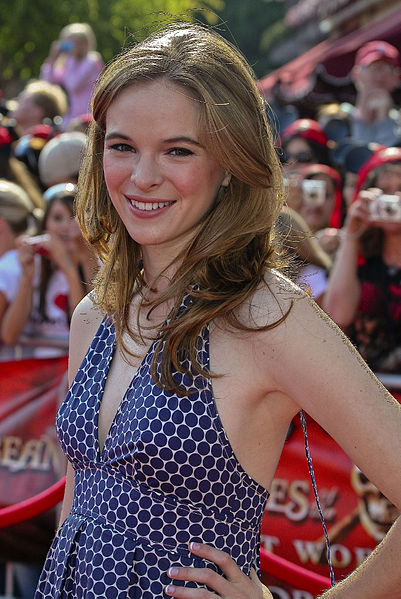 Danielle Nicole Panabaker (born September 19, 1987[1]) is an American actress. She began acting as a teenager and came to prominence for her roles in the Disney films Stuck in the Suburbs (2004), Sky High (2005) and Read It and Weep (2006), the latter alongside her younger sister Kay Panabaker, and in the HBO miniseries Empire Falls (2005). She won three Young Artist Awards: for guest-starring in an episode of the legal drama television series The Guardian (2004), for her lead role in the TV film Searching for David's Heart (2005) and for her ensemble performance in the family comedy film Yours, Mine & Ours (2006).

After recurring roles on the drama series Necessary Roughness (2011-13), the crime series Bones (2012-13) and the crime drama Justified (2014), Panabaker guest-starred as Dr. Caitlin Snow on The CW television series Arrow in April 2014. Since October 2014, she has reprised the role of Caitlin Snow as a main character in The CW spin-off series The Flash and has also appeared as a special guest star in Arrow and the other Arrowverse series, Supergirl and Legends of Tomorrow.

Panabaker was born in Augusta, Georgia,[2] to Donna (née Mayock) and Harold Panabaker.[3] Her younger sister Kay was also an actress, and is currently working as a zoologist. As her father's sales job took them across the country, the family spent time in South Carolina, Pennsylvania, and, for a short time around Panabaker's kindergarten year, in Orange, Texas.[4] She took a theater class at a summer camp, discovered her love of acting, and started acting in community theaters at the age of 12, later auditioning for commercials.

After moving to Naperville, Illinois, in 2000,[4] Panabaker went to Crone Middle School and then Neuqua Valley High School,[4] participating in the speech team. She graduated from high school when she was 14 years old.[4][5][6] In 2003, feeling it was the only way to land acting roles regularly, Panabaker, her sister, and their mother relocated to Los Angeles, California, so she could pursue an acting career.[4] She attended Glendale Community College, studying acting. In 2005, she earned her associate degree and appeared on the national Dean's List. In 2006, she began her senior year at the University of California, Los Angeles, from which she graduated with a Bachelor of Arts in June 2007, again appearing on the Dean's List.[6]

Panabaker followed her initial appearances in commercials with roles in television, including a part in The Guardian (for which she won a Young Artist Award), as well as other television series including Malcolm in the Middle, Law & Order: Special Victims Unit, Medium, and Summerland, and the Disney Channel Original Movie Stuck in the Suburbs. She also appeared in the Lifetime Television productions Sex and the Single Mom and Mom at Sixteen, as well as the well-reviewed miniseries Empire Falls.[4] She considers Empire Falls to be her big break, as it gave her the confidence to pursue her career.[4] In addition, Panabaker appeared in stage productions with roles in musical theater, including West Side Story, Pippin, Once upon a Time, and Beauty Lou and the Country Beast. In 2004, she starred in the ABC film "Searching for David's Heart", alongside co-former Disney star Ricky Ullman. In 2005, Panabaker co-starred in two widely released theatrical films, Sky High and Yours, Mine and Ours. Her next role was in the film Home of the Giants (2008), opposite Ryan Merriman and Haley Joel Osment. She also had a supporting role in the film Mr. Brooks opposite Kevin Costner. In the Disney Channel original movie Read It and Weep, she plays Is, an alternate version of Jamie, who was played by her real-life sister Kay.

Panabaker cast in the CBS television drama pilot Shark as Julie Stark, the main character's daughter. She had a regular role in the series, which ran for two years. Although she sometimes only appeared in a scene or two an episode, and was absent from three episodes in the series run, she was billed second to the star, James Woods.[7]

In 2009, Panabaker played Jenna, a main character in 2009's Friday the 13th remake along with Jared Padalecki.[8] Panabaker next starred in the films The Crazies and The Ward.[9]

In 2011, Panabaker starred as Katie Lapp, the lead character in the Hallmark Movie The Shunning, based on the novel by Beverly Lewis. She was to reprise her role in the 2013 sequel The Confession,[10] but a scheduling conflict forced her to drop out. The role was recast, going to Katie Leclerc.[11]

In 2013, she starred in another Hallmark Channel Original Movie, Nearlyweds. On May 5, 2013, Panabaker joined actors including Philip Baker Hall, Bill Pullman, and Maggie Siff in performing at Cedering Fox's WordTheatre, where they read aloud contemporary short fiction.[12]

In 2014, Panabaker starred in Bradley D. King's award-winning science-fiction film Time Lapse,[13] for which she won the award for Best Actor/Actress at the 2014 London Independent Film Festival.[14] Since October 2014, she has played Caitlin Snow / Killer Frost as a main character in the CW series The Flash.[15][16] Panabaker will make her directorial debut during the fifth season of The Flash.[17]

Panabaker volunteers for multiple organizations including the Art of Elysium, Unicef, and Young Storytellers Foundation.[18] In July 2016, Panabaker announced that she was engaged to her longtime boyfriend Hayes Robbins.[19][20] They were married on June 24, 2017.[21]

Panabaker at the 2007 Pirates of the Caribbean: At World's End première