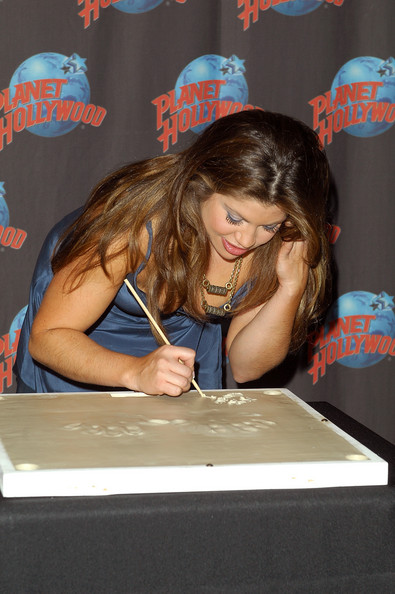 Danielle Christine Fishel (born May 5, 1981[2][not in citation given]) is an American actress and television personality. She is known for her role as Topanga Lawrence-Matthews on the 1990s teen sitcom Boy Meets World, and its 2014 successor Girl Meets World on Disney Channel.

She is also known for being the host of Style Network's The Dish. Fishel also appears in National Lampoon's Dorm Daze and its sequel, and was a spokeswoman for Nutrisystem. She is also a resident reporter on PopSugar, and their spin-off YouTube channel, PopSugar Girls Guide.[3]

Fishel was born in Mesa, Arizona, the daughter of Jennifer, a personal manager, and Rick Fishel, former President of Masimo Corporation.[4] She is of half Maltese descent.[5]
Read more...

In 1991, at the age of 10, Fishel was discovered in a community theater where she performed in two productions, The Wizard of Oz and Peter Pan. She quickly moved on to do voice-overs and commercials, including several as a Barbie Girl for Mattel. Soon after, she appeared on two episodes of the hit show Full House, guest starring as a character named Jennifer. She also had a small role on Harry and the Hendersons, playing Jessica. Fishel's mother became her full-time manager.

In 1993, at the age of 12, Fishel began her well-known role as Topanga Lawrence-Matthews on ABC's pilot series Boy Meets World. Originally written as a small part, Topanga became a recurring role. After a successful first year, Fishel became a show regular. Fishel's character was a sparky, intelligent girl who was mature beyond her years; she replaced the nerdy Stuart Minkus as the brains of the class. The long-running show ended in 2000 after seven years.

Fishel was on the cover of Seventeen in December 1998. She took home a 1998 Young Star for Best Performance by a Young Actress in a Comedy TV Series. In June 1999, she was one of "The 21 Hottest Stars Under 21" as presented by Teen People. Fishel was on the cover of GQ's hottest stars to watch in GQ's 1997 October issue. (GQ 1997 10) She appeared in the music video for "Until You Loved Me" by Canadian music group The Moffatts.

Since Boy Meets World ended, Fishel has appeared in several films, including National Lampoon's Dorm Daze. In 2006, she appeared in three made-for-DVD releases: National Lampoon's Dorm Daze 2 (appearing again as "Marla" from the first film), the action film Gamebox 1.0 (playing a dual role), and The Chosen One, an independent animated film in which she provides the voice of the lead female character.

In 2006, Fishel appeared as a guest on The Tyra Banks Show where she discussed her dramatic weight loss with the use of the Nutrisystems Diet.[6] Following her appearance on the show, Fishel became a spokeswoman for Nutrisystem. She also became a special correspondent for The Tyra Banks Show, starting in early February 2007.[7] By 2010 she had gained some of the weight back, and told People magazine she could not maintain her Nutrisystem weight.[8]

In 2003, Fishel co-hosted Say What? Karaoke on MTV for one season. From August 2008 to March 2011 Fishel hosted The Dish for the Style Network, which satirized pop culture in a format similar to sister network E! Entertainment Television's The Soup. Fishel was also on Fuse TV as host of The Fuse 20, and was a guest star on the round table on an episode of Chelsea Lately. Beginning in 2012, Fishel became the host of MSN TV's Last Night on TV.

In 2013, Fishel starred in the controversial drama, Boiling Pot, which is based on true events of racism that occurred on college campuses across the country during the 2008 Presidential election[citation needed]. The film, written and directed by the Ashmawey brothers under AshmaweyFilms, also stars Academy Award-winner Louis Gossett Jr., Keith David, M. Emmet Walsh, and John Heard. Fishel plays an average college girl, naive regarding racism and unaware of its existence. She struggles to find acceptance from her parents for her non-white fiance and quickly gets tangled in racist events happening on campus. Boiling Pot was finally released in September 2015 to lackluster response.[9] In October 2013, she was featured in Clapping for the Wrong Reasons, a short film to promote Childish Gambino's second studio album, Because the Internet.

In 2014, Fishel reprised her role of Topanga Lawrence-Matthews in the Boy Meets World spin-off series, Girl Meets World. The series premiered on Disney Channel on June 27, 2014, and features Topanga and her Boy Meets World love interest Cory Matthews (Ben Savage) married in their adult years with two children. The series follows Cory and Topanga's daughter Riley (Rowan Blanchard) and her friend, Maya (Sabrina Carpenter) as she enters middle school and tries to navigate through life.