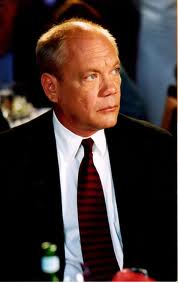 Daniel von Bargen (June 5, 1950 - March 1, 2015) was an American film, stage and television actor. He was known for his roles as Mr. Kruger on Seinfeld, Commandant Edwin Spangler on Malcolm in the Middle, and Chief Grady in Super Troopers.[1]

Von Bargen was born to Juanita J. (née Bustle) and Donald L. von Bargen,[2] and was of German and English descent. He grew up in Cincinnati for most of his childhood before moving with his family to Southern California. In 1968, von Bargen graduated from Reading High School.[3] He graduated from Purdue University in Indiana.[4]

In 1974, von Bargen made his television debut in Great Performances.[5]

Von Bargen played the maniacal sorcerer Nix in Clive Barker's Lord of Illusions and the Sheriff in The Postman. He played a terrorist in a season 5 episode of The X-Files.[6]

Von Bargen's stage career included a long residency with Trinity Repertory Company in Providence, Rhode Island; he made his Off-Broadway debut in 1981 in Missing Persons.[4] He also appeared in the debut of Larry Gelbart's Mastergate and other plays at the American Repertory Theater in Cambridge, Massachusetts. He made his Broadway debut when the show went to New York City. In 1990, he won a Theatre World Award for Outstanding New Performer for his role in Mastergate.[7] His last films roles were as Maury in London Betty and as George Burgess in Things That Hang from Trees.[8]

In 1993, von Bargen narrated the unabridged Streets of Laredo audiobook.[9]

On February 20, 2012, von Bargen shot himself in the temple during an apparent suicide attempt. After placing a phone call to a 911 operator, emergency crews were dispatched to his Montgomery, Ohio, apartment. Von Bargen suffered from diabetes and, at the time of his death, had been living with one leg amputated. He was due to have a couple of toes amputated on his remaining foot and reportedly did not want to submit to another surgery.[10]

Report a problem
Biography of Daniel Von Bargen at FanPal • 2021