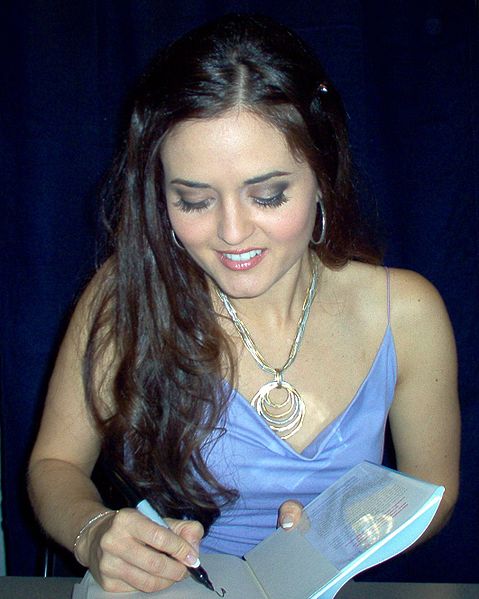 From 2010-2013 and 2018-present, McKellar voiced Miss Martian in the animated superhero series Young Justice. In 2015, McKellar was cast in the Netflix original series Project Mc2. She also appears in several television films for Hallmark Channel.

In addition to her acting work, McKellar later wrote six non-fiction books, all dealing with mathematics (as she has a bachelor's degree in math from UCLA): Math Doesn't Suck, Kiss My Math, Hot X: Algebra Exposed, Girls Get Curves: Geometry Takes Shape, which encourage middle-school and high-school girls to have confidence and succeed in mathematics, Goodnight, Numbers, and Do Not Open This Math Book.[2][3][4]

McKellar was born in La Jolla, California.[1] She moved with her family to Los Angeles when she was eight. Her mother Mahaila was a homemaker; her father Christopher is a real estate developer.[5] She is of paternal Scottish, French, German, Spanish, Dutch descent and her mother is of Portuguese origin via the Azores and Madeira islands.[6]

McKellar studied at the University of California, Los Angeles where she earned a B.S. degree summa cum laude in Mathematics in 1998.[7] As an undergraduate, she coauthored a scientific paper with Professor Lincoln Chayes and fellow student Brandy Winn titled "Percolation and Gibbs states multiplicity for ferromagnetic Ashkin-Teller models on ."[8] Their results are termed the "Chayes-McKellar-Winn theorem".[9][10] Later, when Chayes was asked to comment about the mathematical abilities of his student coauthors, he was quoted in The New York Times, "I thought that the two were really, really first-rate."[11] For her past collaborative work on research papers, McKellar is currently assigned the Erdős number four, and her Erdős-Bacon number is six.[12]

At age seven, McKellar enrolled in weekend acting classes for children at the Lee Strasberg Institute in Los Angeles.[13] In her teens, she landed a prominent role in The Wonder Years, an American television comedy-drama that ran for six seasons on ABC, from 1988 to 1993. She played Gwendolyn "Winnie" Cooper, the main love interest of Kevin Arnold (played by Fred Savage) on the show. Her first kiss was with Fred Savage in an episode of The Wonder Years.[14]

She later said, "My first kiss was a pretty nerve-wracking experience! But we never kissed off screen, and pretty quickly our feelings turned into brother/sister, and stayed that way."[15] Late-night talk show host Jimmy Fallon has said that the character of Winnie Cooper "is the coolest girl in any TV show ever."[16]

McKellar has said that she found it "difficult" to move from being a child actress to an adult actress.[15] Since leaving The Wonder Years, McKellar has had several guest roles in television series (including one with former co-star Fred Savage on Working), and has written and directed two short films. She appeared in two Lifetime TV movies in the Moment of Truth series, playing Kristin Guthrie in 1994's Cradle of Conspiracy and Annie Mills Carman in 1996's Justice for Annie. She briefly returned to regular television with a recurring role in the 2002-03 season of The West Wing, portraying Elsie Snuffin, the stepsister and assistant of Deputy White House Communications Director Will Bailey.

McKellar was featured in Debbie Gibson's eighth single from the Electric Youth album, "No More Rhyme", which was released in 1989. She plays the cello in the beginning of the video.[17]

McKellar appeared in lingerie in the July 2005 edition of Stuff magazine[18] after readers voted her the 1990s star they would most like to see in lingerie. McKellar explained that she agreed to the shoot in part to obtain "grittier roles".[15]

In 2006, McKellar starred in a Lifetime movie and web-based series titled Inspector Mom about a mother who solves mysteries.[19][20]

On the August 1, 2007, edition of the Don and Mike Show, a WJFK-FM radio program out of Washington, D.C., McKellar announced plans that the producers of How I Met Your Mother were planning to bring her back for a recurring role (she guest-starred on the show in late 2005 in "The Pineapple Incident" and again in early 2007 in "Third Wheel"). She also made an appearance on the show The Big Bang Theory, in the episode "The Psychic Vortex".[21]

In 2008, she starred in Heatstroke, a Sci-Fi Channel original movie about searching for alien life on Earth and in 2009 she was one of the stars commenting on the occurrences of the new millennium in VH1's I Love the New Millennium and was the math correspondent for Brink, a program by the Science Channel about technology. In 2013, she played Ellen Plainview in Lifetime's reimagining of the 1956 Alfred Hitchcock film The Wrong Man.

In 2012, she starred in the Lifetime movie Love at the Christmas Table with Dustin Milligan.

In January 2013, she starred in the Syfy movie Tasmanian Devils with Apolo Ohno.

On March 4, 2014, she was announced to be joining season 18 of Dancing with the Stars. She paired with Valentin Chmerkovskiy.[23] McKellar and Chmerkovskiy were eliminated on Week 8, finishing in 6th place.

In 2015, she starred in the Netflix original series Project Mc2 as The Quail.

She has starred in several Hallmark Channel movies, including Crown for Christmas, My Christmas Dream, and Campfire Kiss.

Her first book, Math Doesn't Suck: How to Survive Middle School Math without Losing Your Mind or Breaking a Nail, was a New York Times bestseller,[2] and was favorably reviewed by Tara C. Smith, the founder of Iowa Citizens for Science and a professor of epidemiology at the University of Iowa.[24] The book also received a review from Anthony Jones, writing for the School Librarian journal, who described the book as "a trouble-shooting guide to help girls overcome their biggest maths challenges," noting what he described as "real-world examples of great mathematics in action."[25] In an interview with Smith, McKellar said that she wrote the book "to show girls that math is accessible and relevant, and even a little glamorous" and to counteract "damaging social messages telling young girls that math and science aren't for them".[26]

McKellar's second book, Kiss My Math: Showing Pre-Algebra Who's Boss,[27] was released on August 5, 2008. The book's target audience is girls in the 7th through 9th grades. Her third book, Hot X: Algebra Exposed![28] covers algebra topics, while the previous two titles were intended as "algebra-readiness books."[29] Hot X was published on August 3, 2010. Her fourth book, Girls Get Curves - Geometry Takes Shape,[30] focuses on the subject of geometry, and attempts to make the subject more accessible.[31]

McKellar was named Person of the Week on World News with Charles Gibson for the week ending August 10, 2007. The news segment highlighted her book Math Doesn't Suck and her efforts to help girls develop an interest in mathematics, especially during the middle school years.[34] In January 2014, she received the Joint Policy Board for Mathematics (JPBM) Communications Award. The citation credited her books, blog, and public appearances for encouraging "countless middle and high school students, especially girls, to be more interested in mathematics."[35]

Report a problem
Write to Danica McKellar at FanPal • 2021