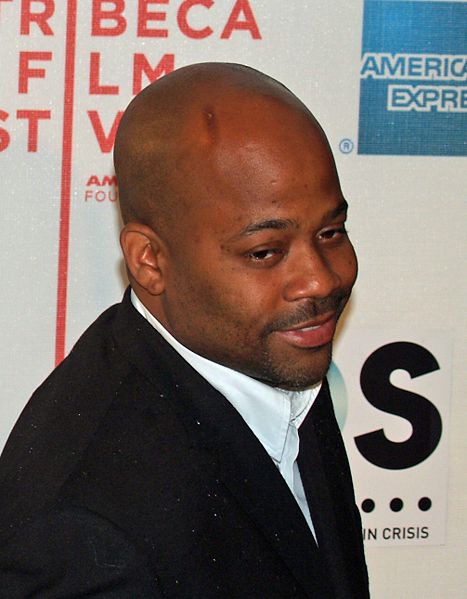 Damon Anthony Dash (born May 3, 1971), also known as Dame Dash, is an American entrepreneur, music producer and actor.[2] Dash is best known as co-founder of Roc-A-Fella Records along with Shawn "Jay-Z" Carter and Kareem "Biggs" Burke.[3]

Born in New York City, Dash swept the floors of a local barbershop and sold newspapers in order to buy sneakers and shirts as a teenager. Dash "learned to hustle", in his own words, from the example of his mother, who died of an asthma attack when he was 15.[4]
Read more...

Dash served as Jay-Z's former manager and business partner at Roc-A-Fella Records, and in 1999, he organized a tour for Jay-Z which made $19 million.[5] Their relationship soured as a result of two subsequent events. The first was when Roc-A-Fella Records was purchased by Def Jam Recordings (which had previously only owned half of the company) in 2004, after which Jay-Z agreed to take a job as Def Jam's president. Then, in late 2005, Jay-Z bought Dash out of his stake in Rocawear.[6] In April 2014, it was announced that Dash is also involved with Blind Debit, a fingerprint payment application being developed by Dez White.[7]

Dash met R&B singer Aaliyah in the summer of 2000 through his accountant[8][9] in New York City and dated her until her death on August 25, 2001 in a plane crash in The Bahamas.[10] Though they were not formally engaged, in interviews given after Aaliyah's death, Dash stated that the couple had planned to marry.[11]

Dash married fashion designer Rachel Roy in 2005. They met when she was working as an intern at Rocawear. Together they have two daughters, Ava Dash (born on December 7, 1999) and Tallulah Dash (born May 14, 2008). Following their divorce in 2009, they had a bitter custody battle.[12] In April 2015, Roy accused Dash of domestic abuse and filed for a restraining order.[12] Roy was awarded sole custody of both daughters. The court granted Roy and her daughters with a three-year restraining order against Dash.[13] Days later, Dash filed a $2.5 million claim against Roy in asserted damage for allegedly mishandling their joint fashion business, Royale Etenia.[14]

Dash has a son, Dame "Boogie" Dash, with former girlfriend Linda Williams. In 2014, he was ordered to pay Williams $50,000 for causing her to be prosecuted on harassment charges in 2009.[15] Boogie stars in the reality television show Growing Up Hip Hop.[16] Dash also has another son, Lucky, born in 2004.[17]