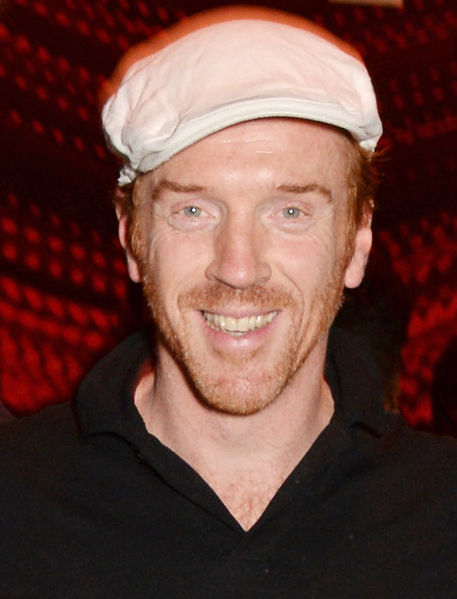 Damian Watcyn Lewis OBE (born 11 February 1971) is an English actor and producer. He played U.S. Army Major Richard Winters in the HBO miniseries Band of Brothers, which earned him a Golden Globe nomination, and also portrayed U.S. Marine Sergeant Nicholas Brody in the Showtime series Homeland (which earned him a Primetime Emmy Award and a Golden Globe Award).[1] His performance as King Henry VIII in Wolf Hall earned him his third Primetime Emmy nomination and fourth Golden Globe nomination. He currently plays Bobby Axelrod in the Showtime series Billions (2016-present).

Lewis was born in St John's Wood, London, the elder son of Charlotte Mary (née Bowater) and John Watcyn Lewis, a City insurance broker with Lloyd's.[2][3][4][5] His paternal grandparents were Welsh.[6] His maternal grandfather was Lord Mayor of London Sir Ian Bowater and his maternal grandmother's ancestors include Lord Dawson of Penn (a doctor to the Royal Family) and the philanthropist and baronet Sir Alfred Yarrow.[4][7] He has stated that he "went to English boarding schools and grew up around people very much like Soames and in a milieu very much like the Forsytes'".[8]

As a child, Lewis made several visits to the U.S. to visit relatives during his summers.[9][10] He first decided to become an actor at age 16.[5] He was educated at the independent Ashdown House School in Forest Row, East Sussex, and at Eton College. He graduated from the Guildhall School of Music and Drama in 1993, after which he served as a stage actor for the Royal Shakespeare Company.

During his time with the RSC, he played Borgheim in Adrian Noble's production of Henrik Ibsen's Little Eyolf and Posthumus in William Shakespeare's Cymbeline. He also starred in another of Ibsen's plays, as Karsten Bernick in Pillars of the Community at the National Theatre in November 2005.[11]

Lewis once worked as a telemarketer selling car alarms, a job he detested.[12] He appeared in Robinson Crusoe (1997) as Patrick Conner. He appeared in Jonathan Kent's production of Hamlet, playing Laertes. This production was seen by Steven Spielberg, who later cast Lewis as Richard Winters in Band of Brothers, the first role of several that required him to have a credible American accent.[9]

Subsequently, Lewis portrayed Soames Forsyte in the ITV series The Forsyte Saga, which earned him rave reviews.[13] He returned to the US to star in Dreamcatcher, a Stephen King film about a man who becomes possessed by an evil alien. The character is American but when possessed he takes on a British accent.[9] On the heels of this role, he starred in Keane as a Manhattanite with a fragile mental state who is searching for his missing daughter. Despite the film's poor box-office performance, the role won Lewis rave reviews.[14][15][16]

He played Jeffrey Archer in the TV special Jeffrey Archer: The Truth. Since 2004, he has appeared in a number of films, as well as the 2005 BBC TV adaptation of Shakespeare's comedy Much Ado About Nothing, as part of the ShakespeaRe-Told season. Lewis played the role of Yassen Gregorovich in the film Stormbreaker. In 2006, he appeared in Stephen Poliakoff's BBC drama Friends and Crocodiles. He has appeared on BBC's Have I Got News for You as guest host several times; on 10 November 2006, 1 May 2009, 18 November 2010, 27 April 9 November 2012 and 31 October 2014.

In 2008, Lewis starred as the main character Charlie Crews in the US television series Life on NBC. The show premiered in the U.S. on 26 September 2007 and was affected by the 2007-08 Writers Guild of America strike. Only half of the first season's shows were produced. Regardless, the show won a 2008 AFI Award for best television series.[17] Although the show received critical acclaim, when it returned the following television season, it was shuffled from night to night, and eventually cancelled by NBC to clear its time slot for the less expensive[clarification needed] nightly programme, The Jay Leno Show.[citation needed]

Lewis appeared, the following year, in the lead role in The Baker, a film directed by his brother, Gareth. Damian took a supporting role of Rizza in The Escapist, which he also helped produce. He led the cast in Martin Crimp's version of Molière's comedy, The Misanthrope, which opened in December 2009 at the Comedy Theatre, London.[18] Other cast members included Tara Fitzgerald, Keira Knightley and Dominic Rowan.

From 2011 to 2013, Lewis had a starring role as Gunnery Sergeant Nicholas Brody in the Showtime series Homeland.[22] In 2013, he narrated poetry for The Love Book App, an "interactive anthology of love literature developed by Allie Byrne Esiri".[23]

Since 2016, he stars as billionaire Bobby Axelrod in the Showtime series Billions.[24]

Lewis was appointed an Officer of the Order of the British Empire (OBE) in the 2014 Birthday Honours for services to drama.[25]

On 4 July 2007, Lewis married actress Helen McCrory. They have a daughter, Manon (born 8 September 2006), and a son, Gulliver (born 2 November 2007).[26] Lewis and his family left England in the latter half of 2007 to live in Los Angeles, California, while he worked on the NBC-TV crime drama Life. However, after the completion of that series' final episode in early 2009, he, his wife, and children returned to England to reside in a Victorian townhouse located in Tufnell Park, in north London.[27]

In March 2010, Lewis became a trade justice ambassador for the charity Christian Aid.[citation needed] In May 2006 and June 2018, he played for England in Soccer Aid, and played golf for Europe in the All*Star Cup in August 2006, both shown on ITV.

Damian Lewis is an avid supporter of Liverpool Football Club.

Report a problem
Write to Damian Lewis at FanPal • 2021