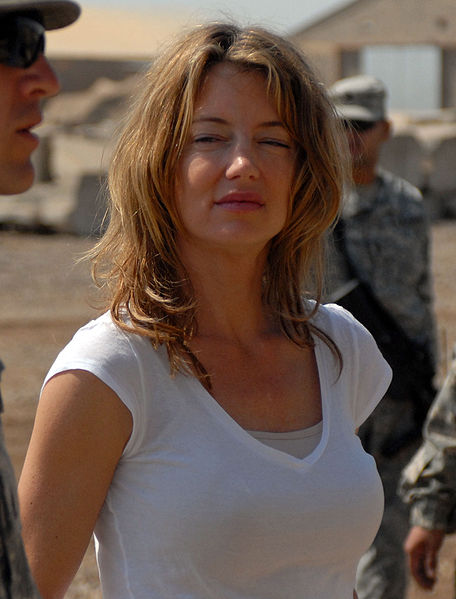 Cynthia Michele Watros (born September 2, 1968) is an American actress. Watros is known for her roles as Libby Smith on the ABC TV series Lost, Kellie in The Drew Carey Show, Erin in Titus, and Annie Dutton in Guiding Light.

Watros initially became known for her role as Annie Dutton on the CBS soap opera Guiding Light from 1994-98. Her character, a nurse, began as a heroine, but she gained notice and critical acclaim as her character gradually descended into madness. In 1998, Watros won the Daytime Emmy Award for Outstanding Lead Actress in a Drama Series for her role on Guiding Light. In 1998, she briefly filled in for Jensen Buchanan as Victoria Hudson McKinnon on Another World while Buchanan was on maternity leave.[citation needed]

Watros appeared as Erin Fitzpatrick on Titus from 2000 to 2002 and gained recognition as a comedic actress, playing the fiancée of the title character. According to the DVD commentary, Erin was originally intended to be neurotic and socially awkward, but the character was revised a week before the pilot was shot. After Titus was canceled, she took on the role of Kellie Newmark on The Drew Carey Show, as a replacement for Christa Miller. Watros played the role from 2002-04.[citation needed]

From 2005 to 2006, Watros was a cast member on the ABC series Lost, playing psychologist Libby, a member of the "Tailies", a group of survivors of the plane crash who were in the tail section of the plane (and not seen during Season One). She was a romantic interest to Hurley and was very mysterious showing up in flashbacks. In the episode "Two for the Road", Libby was shot and killed by Michael Dawson. Libby briefly reappeared in the 2008 episode "Meet Kevin Johnson". She returned in 2010 in the episode "Everybody Loves Hugo" in the final season of Lost, in which she played a large part in the story. In addition, she appeared in the season finale, albeit without speaking lines.

After her departure from Lost in 2006, Watros filmed a pilot for a show titled My Ex-Life for CBS. She was slated to play the ex-wife of a character played by Tom Cavanagh. However, the pilot was not chosen by CBS.[1] Watros was also the lead in the 2007 CBS television pilot for The Rich Inner Life of Penelope Cloud, a comedy about a former literary genius who, after an awakening, decides to pursue optimism instead of cynicism.

In 2009, Watros filmed a pilot for Valley Girls, a spin-off of the CW series Gossip Girl set in the 1980s, in which she played CeCe Rhodes, the socialite ex-wife of Rick Rhodes, and mother of the series' protagonists. In a May 2009 episode of the USA series In Plain Sight, "A Stand-Up Triple", she guest starred as a mother of three children in the witness protection program. Beginning in April 2010, Watros joined the cast of the TV medical drama House for seven episodes as Samantha Carr, one of Dr. James Wilson's ex-wives.

Watros appeared in the 2012 indie film, Electrick Children. In May 2012, she guest-starred in episode 8.22 of Grey's Anatomy. In June 2013, she guest-starred in episode 4.17 of Warehouse 13. She played Mary Matrix, coach of the FPS Varsity team in the online series Video Game High School. Her character first appears in season two of the series, which started July 2013. Watros starred as Avery Jenning's self-obsessed aunt in Dog with a Blog on December 6, 2013.

Watros was born in Lake Orion, Michigan. She attended Macomb Community College in Clinton Township, Michigan,[3] and received a Bachelor of Fine Arts degree in Theatre from Boston University,[4] where she was part of Boston University's Professional Actors Training Program.[5]

Watros has been married to Curtis Gilliland since 1996. They have twin daughters, born in 2001.[6]

In 2008, Watros participated in a USO tour to Iraq, visiting several bases, including COP Callahan in Baghdad's East Adamiyah area.