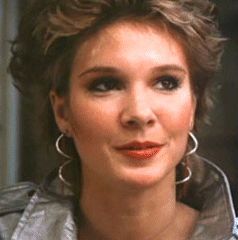 Born in Nashville, Tennessee, Rhodes began her brief show business career working at Opryland USA as a singer and dancer while attending Glencliff High School during the 1970s.[1] Raised in a Baptist family, Rhodes tried to maintain a clean-cut image in her acting roles and in the media, turning down scripts that required nudity and refusing offers to pose for pictorials in Playboy magazine. Sylvester Stallone, the director of Staying Alive, reinforced these facts by stating that Rhodes "would sooner quit the business before doing anything to embarrass her parents."[2]

Rhodes played a small role in the fantasy musical Xanadu (1980)[3] with her next role as Tina Tech in the musical film Flashdance. After Flashdance, Rhodes was cast opposite John Travolta in Sylvester Stallone's 1983 film Staying Alive, a sequel to the 1977 hit film Saturday Night Fever. Rhodes' character, Jackie, was an ensemble dancer, bar band singer, and some-time love interest of Travolta's character, Tony Manero. While poorly reviewed, the film was commercially successful.[4]

Rhodes also appeared as a dancer in music videos, such as "Rosanna" by the band Toto, "The Woman in You" by the Bee Gees, and "Don't Mean Nothing" by Richard Marx. She was a dancer for the glam rock band The Tubes when they toured in the early 1980s. Rhodes later joined the 1980s pop group Animotion, replacing the group's singer Astrid Plane for the recording of its third album of original material. Though the group's single "Room to Move" rose to No. 9 on the Billboard charts, the album failed to match the group's earlier success, peaking at only No. 110 on the pop charts; shortly thereafter, the group disbanded. In 2002, Rhodes co-wrote the smooth jazz track "Perfect Day" with then-husband Richard Marx for December, trumpeter Chris Botti's holiday album.[5]

Rhodes was married to singer-songwriter Richard Marx. They met in 1983, while Marx was working on the motion picture soundtrack for Staying Alive. Rhodes, seven years his senior, thought Marx was much too young for her to date at the time.[6] Marx and Rhodes did not start their relationship until two years later, when they were reacquainted at a party. After a four-year courtship, the couple married on January 8, 1989.[7] After marrying Marx and giving birth to three boys, Rhodes retired from her performing career to raise her family. In an Us Weekly article dated April 4, 2014, Marx's representative confirmed that he and Rhodes were divorcing after 25 years of marriage.[8]