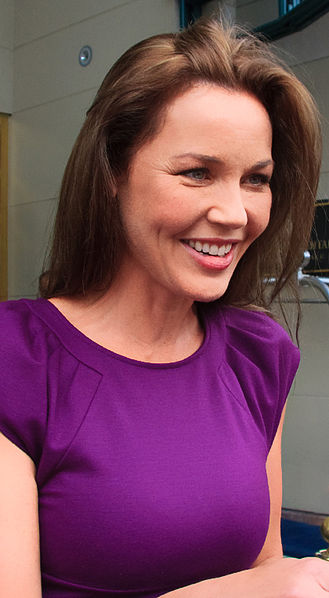 Nielsen was born in Frederikshavn and grew up in the village of Elling,[1] Denmark. Her father, Bent Nielsen, was a bus driver, and her mother was an insurance clerk, who also acted and wrote musical reviews.[2][3][4] She was raised a Mormon.[5] She began her acting career working alongside her mother on the local revue and variety scene. At 18, she traveled to Paris, France, where she worked as an actress and model, which led to further work and study in Italy—at drama school in Rome and in master classes with Lydia Styx, a teacher at Piccolo Teatro di Milano in Milan. She lived in Italy for many years before moving to the United States, where she still resides.
Read more...

She moved to the United States in the mid-1990s and made her first appearance in a major English-language film in 1997 as Christabella Andreoli in The Devil's Advocate, starring opposite Al Pacino and Keanu Reeves. This first minor breakthrough led to roles in the films Permanent Midnight (1998), Rushmore (1998), and Soldier (1998).[7]

In 2000, Nielsen appeared as Lucilla in Scott's Gladiator, starring opposite Russell Crowe and Joaquin Phoenix. Since then, she has starred in American films including Mission to Mars (2000), One Hour Photo (2002), The Hunted (2003), and Basic (2003), for which she had to cut off most of her hair. She also starred in the French thriller Demonlover (2002), directed by Olivier Assayas. She played the Irish mother to an orphan in A Shine of Rainbows (2009).[8]

In 2004, Nielsen made her Danish film debut in the drama, Brødre (also known as Brothers), for which she won the Danish Best Actress Award, the Bodil, as well as Best Actress at the San Sebastian International Film Festival. She was also nominated for Best Actress at the European Film Awards. In 2006, Nielsen appeared in several episodes of Law & Order: Special Victims Unit as Detective Dani Beck. She filled in for Mariska Hargitay, who was on maternity leave at the time of filming.[9]

Alongside Charlotte Gainsbourg, Jamie Bell and Uma Thurman, Nielsen appeared in the 2014 Lars Von Trier film Nymphomaniac.[10] Nielsen was featured in a series of promotional posters prior to the film's release, a campaign The Independent described as "shocking", writing, "Connie Nielsen appears somewhat moist in this poster for Nymphomaniac".[11]

In 2015 she appeared on the latest TV-2 album Det gode liv where she sang along with Steffen Brandt on the track "Brev til Mona" In September 2018 she appeared as a cast member of the CBS drama FBI with Jeremy Sisto and Missy Peregrym. The pilot was aired Sept. 25 and repeated Sept. 29.

From 2004 to 2012, Nielsen dated Metallica drummer and fellow Dane Lars Ulrich. They have one son together, Bryce Thadeus Ulrich-Nielsen (born 21 May 2007, in San Francisco, California).[12] She has an older son, hip-hop producer Sebastian Sartor (born 27 November 1989), from a previous relationship.[13]