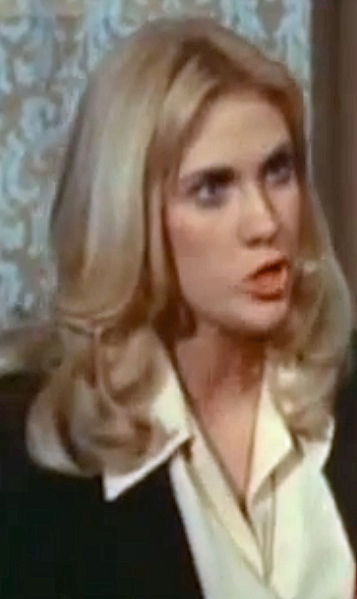 Colleen Celeste Camp (born June 7, 1953)[1] is an American character actress, comedian and producer. After appearing in several bit parts, she had a lead role in the comedy The Swinging Cheerleaders (1974), followed by roles in two installments of the Police Academy series. Camp appeared in supporting parts in Apocalypse Now (1979) and The Seduction (1982), after which she played Yvette the Maid in the 1985 comedy Clue.[2]

Camp has continued to have minor and supporting roles in various independent and studio films, including Election (1999), Factory Girl (2006), Palo Alto (2013), and American Hustle (2013).

Colleen Camp was born on June 7, 1953, in San Francisco, California. She moved to the San Fernando Valley at a young age and attended John H. Francis Polytechnic High School, Los Angeles Valley College, and California State University, Northridge, where she majored in English and minored in theater arts.[3] To help pay for college, Camp trained macaws and worked at the bird attraction at Busch Gardens on weeknights, weekends, and during the summer, where she performed for up to 2,000 people in six shows a day, six days a week.[4] Ultimately striving to be an actress, Camp also took private acting and singing lessons and was eventually noticed by a talent agent. After the agent viewed an hour-long Busch Gardens television special featuring Camp and her birds, she was signed for national television commercials for both Gallo wine and Touch of Sweden hand lotion.[3][5] This exposure led to small television parts in shows such as Marcus Welby, M.D., Happy Days, and Love, American Style, as well as a six-episode stint on the miniseries Rich Man, Poor Man.[3]

Camp landed small early roles in films like Funny Lady with Barbra Streisand and James Caan, and Smile with Bruce Dern and Barbara Feldon in 1975.[3][4] She also appeared in the Bruce Lee movie Game of Death as his girlfriend, Ann, the young aspiring singer (her scenes were shot with a lookalike as Lee had died before she became involved) performing the film's love theme "Will This Be The Song I'll Be Singing Tomorrow". Camp went on to portray a Playmate in Francis Coppola's 1979 film Apocalypse Now (followed by an actual pictorial in the October 1979 Playboy), though most of her footage was cut from the initial theatrical release. She would later feature more heavily in Coppola's Redux cut. She was also the first actress to play Kristin Shepard, Linda Gray's character's sister, in the primetime soap opera Dallas in 1979. Mary Crosby later was cast in this role.[6]

Camp has worked steadily in film comedies like Peter Bogdanovich's 1981 comedy They All Laughed, 1983's Valley Girl and the 1994 Michael J. Fox comedy Greedy. She often is cast as a police officer, appearing in two of the Police Academy films. Camp has been nominated twice for the Worst Supporting Actress Golden Raspberry Award - first, in 1982, for The Seduction, and then, in 1993, for Sliver. In 1999, she had a small part as character Tracy Flick's overbearing mother in the film Election, with Reese Witherspoon as Tracy.[7] She appeared in the episode "Simple Explanation" of House in 2009.

In 2013 she appeared in a supporting part in David O. Russell's American Hustle.[8] The following year, Camp co-produced a Broadway production of Love Letters.[9] and in 2015 co-produced Eli Roth's thriller Knock Knock, also appearing in a supporting role in the film.[10]

Colleen Camp's parents are Dorothy and Wilson. She has two brothers, Don and Glen. She has three nephews Byron, Colin and Ryan.[3]

In the late 1970s, Camp dated Dean Tavoularis, whom she met in the Philippines while filming Apocalypse Now.[3] In 1986, she married John Goldwyn, a Paramount executive, though they divorced in 2001. They have one daughter, Emily.[11]