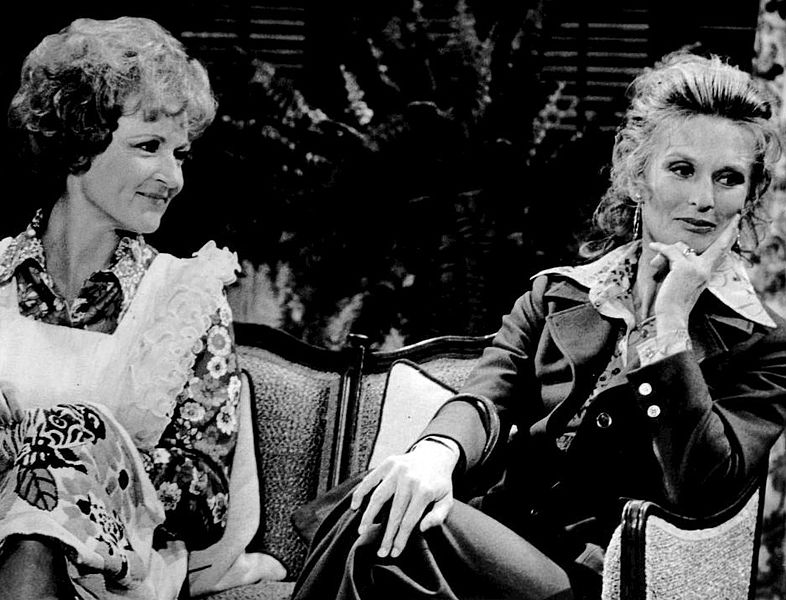 Cloris Leachman (born April 30, 1926) is an American actress and comedian. In a career spanning over seven decades she has won eight Primetime Emmy Awards (record tied with Julia Louis-Dreyfus), a Daytime Emmy Award, and an Academy Award for her role in The Last Picture Show (1971).

As Miss Chicago, Leachman competed in the 20th Miss America pageant and placed in the Top 16 in 1946. Leachman's longest-running role was the nosy and cunning landlady Phyllis Lindstrom on the CBS sitcom The Mary Tyler Moore Show and its spin-off, Phyllis, in the 1970s.

She also appeared in three Mel Brooks films, including Young Frankenstein (1974), starred as Beverly Ann Stickle on the NBC sitcom The Facts of Life from 1986-88, and appeared as Daisy May Moses in The Beverly Hillbillies (1993).

In the 2000s, Leachman had a recurring role as Grandma Ida on the Fox sitcom Malcolm in the Middle, appeared as a roaster in the Comedy Central Roast of Bob Saget in 2008 and portrayed Dottie Rounder in The Oogieloves in the Big Balloon Adventure.

She was a contestant on the seventh season of the ABC reality competition series Dancing with the Stars in 2008, paired with Corky Ballas. She was 82 at the time and is the oldest contestant to have danced on the series.[1]

From 2010-14, she starred as Maw Maw on the Fox sitcom Raising Hope. She played the role of Zorya Vechernyaya on the Starz drama American Gods.

The youngest sister, Mary, was not in show business. Middle sister Claiborne Cary (1932-2010) was an actress and singer.[6] Her maternal grandmother was of Bohemian (Czech) descent.[7]

As a teenager, Leachman appeared in plays by local youth on weekends at Drake University in Des Moines.[8] After graduating from high school, she enrolled at Illinois State University studying drama, and later, Northwestern University, where she was a member of Gamma Phi Beta and a classmate of future comic actor Paul Lynde. She began appearing on television and in films shortly after competing in Miss America in 1946.

After winning a scholarship in the Miss America pageant placing in the Top 16, Leachman studied acting under Elia Kazan at the Actors Studio in New York City. She was cast as a replacement for the role of Nellie Forbush during the original run of Rodgers and Hammerstein's South Pacific. A few years later, she appeared in the Broadway-bound production of William Inge's Come Back, Little Sheba, but left the show before it reached Broadway when Katharine Hepburn asked her to co-star in a production of William Shakespeare's As You Like It.[9]

Leachman appeared in many live television broadcasts in the 1950s, including such programs as Suspense and Studio One. She made her feature film debut as an extra in Carnegie Hall (1947), but had her first real role in Robert Aldrich's film noir classic Kiss Me Deadly,[10] released in 1955. Leachman was several months pregnant during the filming, and appears in one scene running down a darkened highway wearing only a trench coat. A year later, she appeared opposite Paul Newman and Lee Marvin in The Rack (1956). She appeared with Newman again in a brief role in Butch Cassidy and the Sundance Kid (1969).

She continued to work mainly in television, with appearances in Rawhide and in The Twilight Zone episode "It's a Good Life" as well as the sequel "It's Still a Good Life" in the 2002-2003 UPN series revival. During this period, Leachman appeared opposite John Forsythe on the popular anthology Alfred Hitchcock Presents in an episode titled "Premonition". She later appeared as Ruth Martin, Timmy Martin's adoptive mother, in the last half of season four (1957) of Lassie. Jon Provost, who played Timmy, said, "Cloris did not feel particularly challenged by the role. Basically, when she realized that all she'd be doing was baking cookies, she wanted out."[11] She was replaced by June Lockhart in 1958.

That same year, she appeared in an episode of One Step Beyond titled "The Dark Room", in which she portrayed an American photographer living in Paris. In 1960, she played Marilyn Parker, the roommate of Janice Rule's character, Elena Nardos, in the Checkmate episode "The Mask of Vengeance". In 1966, she guest starred on Perry Mason as Gloria Shine in "The Case of the Crafty Kidnapper". In late 1970, Leachman starred in one episode of That Girl as Don Hollinger's sister, Sandy.

Leachman won an Oscar for Best Supporting Actress for her performance in The Last Picture Show (1971), based on the bestselling book by Larry McMurtry. She played the high school gym teacher's neglected wife, with whom Timothy Bottoms' character has an affair. Director Peter Bogdanovich had predicted during production that she would win an Academy Award for her performance. The part was originally offered to Ellen Burstyn, but Burstyn wanted another role in the film.[12]

Leachman has also won a record-setting eight Primetime and one Daytime Emmy Awards and has been nominated more than 20 times, most notably for playing Phyllis Lindstrom on The Mary Tyler Moore Show. Lindstrom was a recurring character on the program for five years and was subsequently featured in a spinoff series, Phyllis (1975-1977), for which Leachman won a Golden Globe Award. The series ran for two seasons. Its cancellation was partly due to the deaths of three regular or recurring cast members during its brief run: Barbara Colby (murdered under mysterious circumstances in a Los Angeles park), and Judith Lowry and Burt Mustin (who played a newly married couple on the show; both were in their 80s and died of natural causes).[citation needed]

In 1977, she guest-starred on The Muppet Show, episode 2.24.[13] In 1978, she won the Sarah Siddons Award for her work in Chicago theater. In 1987, she hosted the VHS releases of Schoolhouse Rock![14] and portrayed the evil witch Griselda for Disney's Cannon Tales production of Hansel and Gretel. In 1986, she returned to television, replacing Charlotte Rae's character Edna Garrett as the den mother on The Facts of Life. Leachman's role as Edna's sister, Beverly Ann Stickle, could not save the long-running series, and it was canceled two years later.

She has voice-acted in numerous animated films, including My Little Pony: The Movie (as the evil witch mother from the Volcano of Gloom), A Troll in Central Park (as Queen Gnorga), The Iron Giant, Gen¹³, and most notably as the voice of the cantankerous sky pirate Dola in Hayao Miyazaki's 1986 feature Castle in the Sky. Dubbed by Disney in 1998, Leachman's performance in this film received nearly unanimous praise.[citation needed] Leachman played embittered, greedy, Slavic Canadian "Grandma Ida" on the Fox sitcom Malcolm in the Middle, for which she won two Emmy Awards for Outstanding Guest Actress in a Comedy Series (in 2002 and 2006). She was nominated for playing the character for six consecutive years. The win marked four consecutive decades with a Primetime Emmy Award for acting, dating back to the 1970s.

Later television credits include the successful Lifetime Television miniseries Beach Girls with Rob Lowe and Julia Ormond. Leachman was nominated for a SAG Award for her role as the wine-soaked former jazz singer and grandmother Evelyn in the Sony feature Spanglish opposite Adam Sandler and Téa Leoni. She had replaced an ailing Anne Bancroft in the role. The film reunited her with the Mary Tyler Moore Show writer, producer, and director James L. Brooks. That same year, she appeared with Sandler again in the remake of The Longest Yard. She also appeared in the Kurt Russell comedy Sky High as a school nurse with X-ray vision. In 2005, she guest starred as Charlie Harper's neighbor Norma in an episode (#3.9, "Madame and Her Special Friend") of Two and a Half Men.

In 2006, Leachman's performance alongside Sir Ben Kingsley and Annette Bening in the HBO special Mrs. Harris earned her an Emmy nomination for Outstanding Supporting Actress in a Miniseries or TV Movie as well as a SAG Award nomination for Outstanding Performance by a Female Actor in a Television Movie or Miniseries. On May 14, 2006, she was awarded an honorary doctorate in fine arts from Drake University.[15]

Leachman was inducted into the Television Academy Hall of Fame in 2011. That same year, she was ranked #23 on the TV Guide Network special Funniest Women on TV.[16]

On June 20, 2014, Leachman received an honorary degree from her alma mater, Northwestern University.[17]

In 2017, she received PETA's Lifetime Achievement Award for her dedication to animal rights issues.[18]

Leachman appeared in three Mel Brooks films, including Young Frankenstein (1974) in which the mere mention of the name of her character, Frau Blücher, elicits the loud neighing of horses (this was an homage to a cinematic villain stereotype; Leachman claimed that Brooks told her that Blücher was German for "glue", though it is not),[19] High Anxiety (1977) as the demented villainess and psychiatric nurse Charlotte Diesel, and Madame Defarge in History of the World: Part I.

In 1989, Leachman starred on Brooks' short-lived NBC sitcom The Nutt House[20] in dual roles as head hotel housekeeper Mrs. Frick (a variation of the Frau Blücher character) and Mrs. Nutt, the senile owner of the hotel (who was only featured in the two-part pilot).

She auditioned to revive her role from Young Frankenstein in the 2007 Broadway production opposite Megan Mullally (who replaced Kristin Chenoweth) and Roger Bart. However, Andrea Martin was cast instead. Brooks was quoted as saying that Leachman, at 81, was too old for the role. "We don't want her to die on stage," he told columnist Army Archerd, a statement to which Leachman took umbrage.[21] However, due to Leachman's success on Dancing with the Stars, Brooks reportedly asked her to reprise her role as Frau Blücher in the Broadway production of Young Frankenstein after the departure of Beth Leavel, who had succeeded Martin.[22][23] The Broadway production closed before this could happen.

Leachman was a contestant on the seventh season of Dancing with the Stars, paired with Corky Ballas, the oldest of the professionals and father of two-time champion Mark Ballas. Leachman is the oldest person to compete on the show to date.[citation needed]

Leachman played the role of Memaw in the film I Can Only Imagine, which is about the story behind the song of the same name by MercyMe.

From 1953 to 1979, Leachman was married to Hollywood impresario George Englund. Her former mother-in-law was character actress Mabel Albertson. The marriage produced five children, four sons and one daughter: Bryan (died 1986), Morgan, Adam, Dinah, and George. Some of them are in show business. Her son Morgan played Dylan on Guiding Light throughout the 1980s and early 1990s.

The Englunds were Bel Air neighbors of Judy Garland and Sid Luft, and of their children, Lorna and Joey Luft, during the early 1960s. Lorna Luft stated in her memoir Me and My Shadows: A Family Memoir that Leachman was "the kind of mom I'd only seen on TV". Knowing of the turmoil at the Garland home but never mentioning it, Leachman prepared meals for the children and made them feel welcome when they needed a place to stay.[citation needed]

Leachman was also a friend of Marlon Brando, whom she met while studying under Elia Kazan in the 1950s. She introduced him to her husband, who became close to Brando as well, directing him in The Ugly American and writing a memoir about their friendship called Marlon Brando: The Way It's Never Been Done Before (2005).[24]

In a parody of Demi Moore's famous Vanity Fair magazine cover photo, Leachman posed au naturel on the cover of Alternative Medicine Digest in 1997, body-painted with images of fruit. A vegetarian, she also posed clad only in lettuce for a 2009 PETA advertisement.[25] She starred in a comedic 2013 spay and neuter ad for PETA, opening a condom wrapper with her teeth.[26]

Leachman has described herself as an atheist.[27]

Her autobiography Cloris: My Autobiography[28] was published in March 2009. She wrote the bestselling book with Englund, her former husband.

Leachman's granddaughter, Anabel Englund, is a singer.[29] In addition to Anabel, Leachman has five other grandchildren—Portia, Skye, Arielle, Jackson, and Hallelujah—and one great-grandson, Braden.[30]