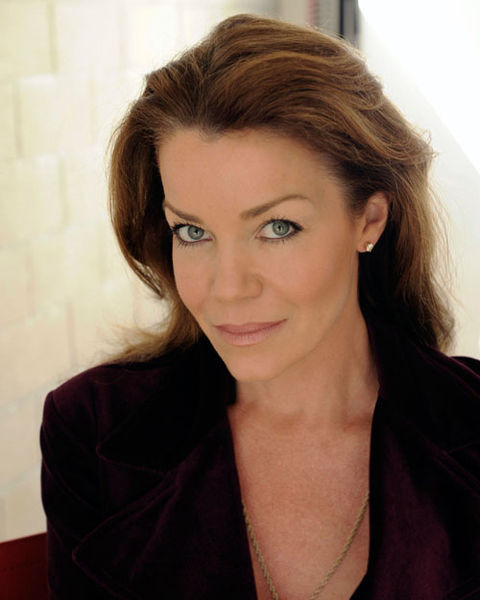 Claudia Ann Christian[1] (born Claudia Ann Coghlan;[2] August 10, 1965)[1] is an American actress and singer, known for her role as Commander Susan Ivanova on the science fiction television series Babylon 5. She has also voiced several characters for the Bethesda Softworks video games Skyrim and Fallout 4. [3][4][5] Her main charity work is publicizing The Sinclair Method as a cure for alcoholism.[6]

Christian was born in Glendale, California, the daughter of Hildegard (née Christian), who worked as the director of Giorgio Beverly Hills, and James Michael Coghlan.[7][8][9] Her mother is from Germany and her father has Irish ancestry.[10][11] She was raised in Connecticut and England.[10] She has two older brothers and currently resides in Los Angeles and London.
Read more...

Christian's first role on television was a guest appearance on Dallas, followed by a series regular role as Melody Hughes on the short-lived drama Berrenger's. She performed feature-film roles such as a stripper possessed by an alien serial killer in The Hidden (1987), police department psychologist Susan Riley in Maniac Cop 2 and model Hexina in Hexed (1993).

In 1994-1998, she appeared as Commander Susan Ivanova, one of the series leads, in the first four seasons of Babylon 5. She left unexpectedly when contract negotiations for the fifth and final season - aggravated by the possibility that there would not be one - broke down. J. Michael Straczynski, the series' creator, maintains that she chose to leave on her own. However, Christian stated that she did wish to return for season 5, but was rebuffed and let go when she requested a small reduction in the number of episodes she would appear in so that she could complete another project.[12] She appeared in the fifth season's series finale, which had been filmed during the fourth season, when it seemed likely that the series would end prematurely, and subsequently reprised her role in Babylon 5: In the Beginning and Babylon 5: Thirdspace.

She posed nude for Playboy magazine in October 1999, appeared in two episodes of Freaks and Geeks in 2000, and appeared in the 2002 She Spies episode, "Spy vs Spy". In 2004, she returned to the live stage (and to Laguna Beach, California, where she had attended high school), starring in the United States premiere of Michael Weller's play What the Night is For, with Kip Gilman, directed by Richard Stein, at the Laguna Playhouse. She starred in the BBC comedy series Broken News in 2005. She also plays Janine Foster, mother of Peri Brown, in the Doctor Who audio drama The Reaping, produced by Big Finish Productions released in the United Kingdom in September 2006.

She voices Anne Manx in the full cast recordings for the Radio Repertory Company of America. In 2010, Christian appeared in the Showtime series Look: The Series.

Christian conceived her own convention, Claudia Con UK, which took place in the United Kingdom on August 13-14, 2011.[citation needed]

Christian has been publicizing The Sinclair Method, a treatment for alcohol dependency, through her book Babylon Confidential.[13] In this book she recalls her own experiences with the condition, and credits The Sinclair Method for saving her life in 2009.[14][15]

She made a documentary titled One Little Pill[16][17] about the method under the auspices of the C3 Foundation, which she founded in order to reach more sufferers of addiction who might benefit from the Sinclair Method.[6]