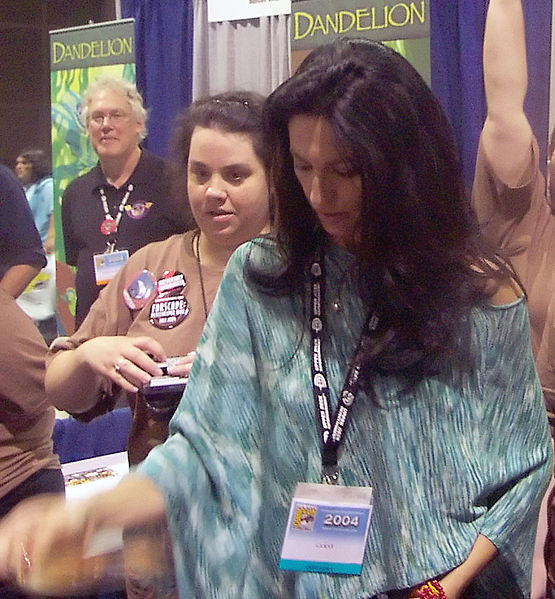 Claudia Lee Black (born 11 October 1972) is an Australian actress and voice actress, known for her portrayals of Aeryn Sun in the science fiction series Farscape and Vala Mal Doran in the science fiction series Stargate SG-1, as well as Sharon "Shazza" Montgomery in the film Pitch Black. She has also had several prominent roles in video games, such as Chloe Frazer in the Uncharted series, the witch Morrigan in Dragon Age: Origins and Dragon Age: Inquisition, Admiral Daro'Xen and Matriarch Aethyta in Mass Effect 2 and Mass Effect 3, and squadmate Samantha Byrne in Gears of War 3.[1] She also starred as Doctor Sabine Lommers in the miniseries Containment, and had a recurring role as Dahlia in the series The Originals.

Black was born and raised in a Jewish family[2] in Sydney, New South Wales, Australia. She was educated at the Anglican Kambala School, in Sydney, NSW.[3] Black has lived, for extensive periods, in Australia, New Zealand, Spain, the United Kingdom, Canada, and the United States.[3] Her parents are Australian medical academics, Jules and Judy Black.
Read more...

Black has acted in Australia and New Zealand in television and movies. She portrayed an intersex woman named Jill Mayhew in the Australian television series Good Guys, Bad Guys.[3] She had a leading role in the New Zealand soap opera City Life playing the role of Greek lawyer Angela Kostapas.[3]

Black gained international recognition for her role in Farscape, and was nominated for a Saturn Award in the Best Actress category in both 2001 and 2002, and won the award in 2005. She has appeared in the feature films Queen of the Damned and Pitch Black. After Farscape ended, Black appeared as Vala Mal Doran in the Stargate SG-1 episode "Prometheus Unbound"; her performance was well-received and she was invited to reprise her role in the show's ninth season when series regular Amanda Tapping went on maternity leave. Black returned to the series as a regular cast member for the tenth and final season, and also starred in Stargate: The Ark of Truth and Stargate: Continuum, films which wrapped up the series' story lines. Black co-starred with Ben Browder in both series.

In the NBC TV show Life (2007), Black was cast in the supporting role of Jennifer Conover for the initial pilot.[4] Due to Black's second pregnancy, the part was recast and the role was given to the actress Jennifer Siebel when the series was bought by the TV network. NBC still used footage of Black, and none of Siebel, when promoting the TV series' debut.

Popular at science fiction conventions, Black showed her talent at singing and playing the guitar at the Farscape conventions, and in 2007 sang on the debut album of musician and fellow Farscape actor Paul Goddard.[3]

Black has performed in theater. She played Portia in a tour of the Merchant of Venice.[3] She has had parts in Spotlight on Women, The Picture of Dorian Gray, Loose Ends and Pick Ups for the Belvoir street theatre; Little Women and The World Knot for the Bicentennial Opera.[3]

Since 2007, Black has been a prolific video game voice actress. She has gained particular attention for her work with BioWare's Dragon Age and Mass Effect series. Her son Odin Black voiced her Dragon Age character's son in Dragon Age: Inquisition.