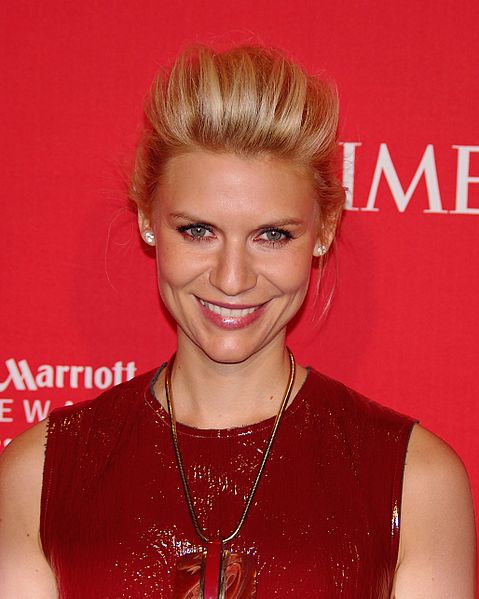 Claire Catherine Danes (born April 12, 1979)[1] is an American actress. She is the recipient of three Emmy Awards, four Golden Globe Awards, and two Screen Actors Guild Awards. In 2012, Time named her one of the 100 most influential people in the world, and she was awarded a star on the Hollywood Walk of Fame in 2015.[2]

From 1998 to 2000, Danes attended Yale University before dropping out to return to acting. She appeared in an Off-Broadway production of The Vagina Monologues in 2000, and made her Broadway debut playing Eliza Doolittle in the 2007 revival of Pygmalion. In 2010, she portrayed Temple Grandin in the highly acclaimed HBO TV film Temple Grandin, which won her a second Golden Globe and her first Primetime Emmy Award for the Outstanding Lead Actress in a Limited Series or Movie. Since 2011, she has starred as Carrie Mathison in the Showtime drama series Homeland, for which she has won two Primetime Emmy Award for Outstanding Lead Actress in a Drama Series, two Golden Globe Award for Best Actress - Television Series Drama, and the Television Critics Association Award for Individual Achievement in Drama.[4][5]

Danes was born in the Manhattan borough of New York City,[6] the daughter of a sculptor and printmaking artist, Carla Danes (née Hall),[7] and a photographer, Christopher Danes.[8] She has an older brother, Asa, who is a lawyer.[9][10][11] Danes' parents met when they were studying at the Rhode Island School of Design.[6] Danes' mother was born in Elizabeth, New Jersey, in 1945 and has a Bachelor of Fine Arts degree in painting and education from the Rhode Island School of Design (1967), an Associate of Applied Science in textile design from Fashion Institute of Technology (1971), a master's degree in early childhood education from Hunter College (1987), and a Master of Fine Arts from Otis College of Art and Design (2002).[10] During Danes' childhood her mother ran a small toddler day-care center called Danes Tribe out of the family's SoHo loft to supplement her work as a painter and textile designer, and later served as Danes' manager.[12]

Danes' father was born in Austin, Texas, in 1944 and, after studying biology and civil engineering at Brown University, received a Bachelor of Fine Arts in photography from Rhode Island School of Design (1968), where he studied with Harry Callahan.[13] During Danes' childhood her father worked as a general contractor for 20 years, working on residential buildings in a company he ran called Overall Construction in New York.[6] He also worked as a photographer and computer consultant.[6] He is the son of Gibson Andrew Danes,[14] a former dean of the Yale School of Art and Architecture from 1958 to 1968.[12] Danes is named after her paternal grandmother, Claire Danes (née Tomowske),[15] who died in 1953.[16]

The family lived in an artist's loft on Crosby Street.[17][18] Danes attended P.S. 3 and PS 11 for elementary school and Professional Performing Arts School for junior high school.[19] Danes attended the New York City Lab School for Collaborative Studies in New York City (the same school her Homeland co-star Morena Baccarin attended).[6] She attended The Dalton School for one year of high school before moving with her parents to Santa Monica, California for the role in My So-Called Life.[6] Danes said they moved two days after the 1994 Northridge earthquake.[6]

Danes graduated from the Lycée Français de Los Angeles in 1997.[6] In 1998, Danes began studies at Yale University. Director Oliver Stone wrote a letter of recommendation.[20] After studying for two years as a psychology major, she dropped out to focus on her film career.[6]

Danes started studying dance when she was six years old.[21] Danes took dance classes from Ellen Robbins at Dance Theater Workshop and acting classes at the Lee Strasberg Theatre and Film Institute at the age of 10.[21] She appeared in theater and video productions in New York City.[6] Although she continued to dance, Danes said that her focus shifted to acting by the time she was nine years old.[12] Her audition with Miloš Forman when she was 11 led to roles in several student films.[6] She signed with agent Karen Friedman at the Writers & Artists talent agency at age 12.[6]

At age 13, Danes got her first big job working on the Dudley Moore TV sitcom pilot called Dudley, which was shot at Silvercup Studios in Astoria, Queens.[6] Danes played a teenage murderer in a guest starring role on Law & Order in the season three episode "Skin Deep." She appeared in an episode of HBO's Lifestories: Families in Crisis entitled "The Coming out of Heidi Leiter." In March 1993, a pilot episode was shot, when she was 13 years old. It would be almost another year and a half before broadcast.

She then starred as the 15-year-old Angela Chase in the television drama series My So-Called Life,[22] starring in the show and providing voiceovers for 17 of the series' 19 episodes, including the pilot episode. For her role, she won a Golden Globe Award and received an Emmy nomination. Despite being canceled after only 19 episodes, My So-Called Life has developed a large cult following.[23] In 1995, she starred in the Soul Asylum music video for "Just Like Anyone."

In 2010, Danes starred in the HBO production of Temple Grandin, a biopic about the eponymous woman with autism. She won the 2010 Emmy Award for Outstanding Lead Actress in a Miniseries or a Movie, the 2011 Golden Globe Award for Best Actress - Miniseries or Television Film and the 2011 Screen Actors Guild Outstanding Performance by a Female Actor in a Television Movie or Miniseries award. The film was well received and Grandin herself praised Danes' performance.[24]

Since 2011, Danes has starred as Carrie Mathison in the Showtime series Homeland in which she plays an agent of the CIA who has bipolar disorder.[25] Her character believes a United States Marine Corps war hero is planning a terrorist attack while being tapped for high-profile government service. The series costars Mandy Patinkin and Damian Lewis. She won the 2013 Golden Globe and the 2012 Golden Globe for Best Actress in a Television Series for her performance. She also won the 2012 and 2013 Emmy for Outstanding Lead Actress in a Drama Series for her performance in Homeland.[26] In 2012, TIME magazine named Danes one of the 100 most influential people in the world.[27]

Danes in Toronto, for a MuchOnDemand promotion of Stardust, 2007

Danes played Beth March in the 1994 film adaptation of Little Women. Although ABC canceled My So-Called Life in 1995, the show helped her to receive more film roles,[18] including 1995's Home for the Holidays and 1996's I Love You, I Love You Not and To Gillian on Her 37th Birthday.

Her first leading role on the big screen came in 1996, when she portrayed Juliet in the film Romeo + Juliet,[18] inspiring director Baz Luhrmann to call her, at age 16, "the Meryl Streep of her generation."[25] Later that year, it was reported that she turned down the female lead role in Titanic.[28][29]

In 1997, Danes played abused wife Kelly Riker in The Rainmaker, directed by Francis Ford Coppola,[18] as well as Jenny in Oliver Stone's noir U Turn.

In 1998, she played several very different roles: Cosette in Les Misérables, and the pregnant teenage daughter of Polish immigrants in Polish Wedding.

In 1999, she made her first appearance in an animated feature with the English version of Princess Mononoke. That same year, she played the role of Julie Barnes in the big screen adaptation of the 1970s TV show The Mod Squad. She also starred in Brokedown Palace.

Danes left her career temporarily to attend Yale, having made 13 films in five years.[18] In 2002, she returned to film. She starred in Igby Goes Down. Later that year, she co-starred as Clarissa Vaughan's (played by Meryl Streep) daughter in the Oscar-nominated film The Hours. The following year, she was cast in Terminator 3: Rise of the Machines, followed by Stage Beauty in 2004. She earned critical acclaim in 2005 when she starred in Shopgirl and The Family Stone. In 2007, she appeared in the fantasy Stardust, which she described as a "classic model of romantic comedy".[30] She appeared in the drama film Evening and The Flock. She was also featured in the film Me and Orson Welles.

Danes got her start in New York City theater appearing in performances of Happiness, Punk Ballet, and Kids Onstage, for which she choreographed her own dance. In April 2000, she appeared off Broadway in Eve Ensler's The Vagina Monologues. In November of that same year, she appeared as Emily Webb in a one night only staged reading of Thornton Wilder's Our Town at All Saint's Episcopal Church in Beverly Hills. The production was staged by Bess Armstrong, who had played the mother of Danes' character on My So-Called Life.[31]

In September 2005, Danes returned to New York's Performance Space 122, where she had performed as a child. She appeared in choreographer Tamar Rogoff's solo dance piece "Christina Olson: American Model," where she portrayed the subject of Andrew Wyeth's famous painting Christina's World. Olson suffered from muscular deterioration that left her weak and partially paralyzed.[32] Danes was praised for her dance skills and acting in the project.[33][34]

In January 2007, Danes performed in Performance Space 122's Edith and Jenny.[35] Later in 2007, Danes made her Broadway theatre debut as Eliza Doolittle in the Roundabout Theatre Company revival of George Bernard Shaw's Pygmalion, directed by David Grindley at the American Airlines Theatre.[36]

In March 2016, Danes performed in Dry Powder by Sarah Burgess at The Public Theater, starring alongside John Krasinski, Hank Azaria and Sanjit De Silva. The play was directed by Thomas Kail.[38]

In 1997, Danes wrote an introduction to Neil Gaiman's Death: The Time of Your Life.[39]

In 2012, Danes's audiobook recording of Margaret Atwood's The Handmaid's Tale was released at Audible.com. Her performance won the 2013 Audie Award for fiction.[40]

She has been in therapy since the age of six, and considers it, "a helpful tool and a luxury to self-reflect and get some insight."[43]

Danes met Australian singer Ben Lee at her eighteenth birthday party in 1997. They dated for almost six years before their relationship ended in 2003.[44] In 2004, Danes began a relationship with former Princess Mononoke and Stage Beauty co-star Billy Crudup that lasted until 2006.[45]

Danes met actor Hugh Dancy on the set of Evening in 2006 in Newport, Rhode Island. They began dating and announced their engagement in February 2009.[46] They married in France in a secret ceremony in late August or early September 2009.[47] On December 17, 2012, their first child was born, a boy whom they named Cyrus.[48] Danes announced her second pregnancy on the Howard Stern Show in April 2018[49], and their second child, another son, was born August 27, 2018.[50] They live in the West Village neighborhood of New York City.[51]

Danes and her mother are supporters of the charity Afghan Hands, which helps women in Afghanistan gain independence, education, and livable wages.[52] Danes is also a long time supporter of Donorschoose.org, a Web site that allows public school teachers to create project requests. Donors then choose what projects inspire them, and help to fund those projects.[53][54][55]

Danes is a feminist, and has been critical of female underrepresentation within Hollywood.[58][59]