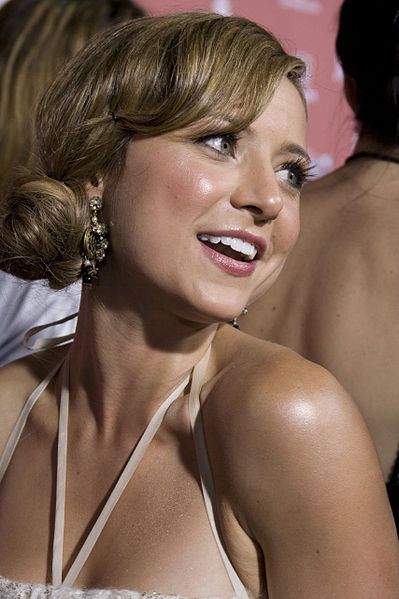 Christine Helen Lakin (born January 25, 1979) is an American actress. She is best known for her role as Alicia "Al" Lambert on the 1990s ABC/CBS sitcom Step by Step. She also played Joan of Arc on Showtime's Reefer Madness, was the sidekick on Craig Kilborn's 2010 Fox talk show The Kilborn File, and provides the voice of Joyce Kinney in Family Guy.

Lakin was born in Dallas, Texas, the daughter of Karen (née Niedwick) and James Daley Lakin, and raised in Roswell, Georgia. She graduated from UCLA with a B.A. in Communication. Her ancestry is Belarusian-Jewish, English, Irish, German, Polish, and Czech.[citation needed]
Read more...

Lakin got her start acting in commercials, before landing her first major role as Young Rose in the American Civil War drama The Rose and the Jackal. That movie aired in 1990, one year before she was cast as Al Lambert, the tomboyish daughter, on Step by Step. After Step by Step was cancelled in 1998, she continued to appear in television movies, such as Showtime's Reefer Madness and 2005's Who's Your Daddy?. In 2006 she was a regular cast member in MTV's Wild 'n Out, an improv comedy show similar in structure to Whose Line Is It Anyway? She also appeared in a commercial called "But He Has Bud Light" that aired during Super Bowl XLI, in which her male companion wants to pick up a hitchhiker who has Bud Light beer in one hand and an axe in the other.[1]

In 2008, she starred alongside Paris Hilton in the movie The Hottie and the Nottie, requiring extensive makeup to make her appear ugly. The film met dismal reviews in the US.[2][3] In 2010, she became Craig Kilborn's sidekick (his "Huckleberry Friend" - a reference to his "favorite movie", Breakfast at Tiffany's) on The Kilborn File on select Fox stations.[4] She was a judge on the YouTube competition Internet Icon alongside Ryan Higa on the YouTube channel, YOMYOMF, and she also is the creator of Worst Audition Ever, a live evening of comedy.[5] Beginning in 2013 she has also been narrating audiobook adaptations.[6] She also voiced the character Jane from The Walking Dead: Season Two video game. She is also the voice of news anchor Joyce Kinney in the animated sitcom Family Guy.

In March 2016, she was named to the cast of the cable network series Hollywood Darlings with fellow 1990s' child stars Jodie Sweetin and Beverley Mitchell.[7]

Lakin appeared on With Special Guest Lauren Lapkus on May 12, 2017.

She was nominated in 1993 for a Young Artist Award for Best Young Actress Starring in a Television Series and in 1994 for another Young Artist Award for Outstanding Youth Ensemble in a Television Series shared with Josh Byrne, Christopher Castile, Brandon Call, Staci Keanan and Angela Watson - both for Step by Step (1991). She also won a Golden Raspberry Award for Worst Screen Couple with Paris Hilton in The Hottie and the Nottie.

Lakin married actor Brandon Breault in October 2014. In November 2015, the couple announced that they were expecting their first child.[10] Their daughter, Georgia James, was born on March 6, 2016.[11] She gave birth to their second child son, Baylor B. Breault, on September 10, 2018.