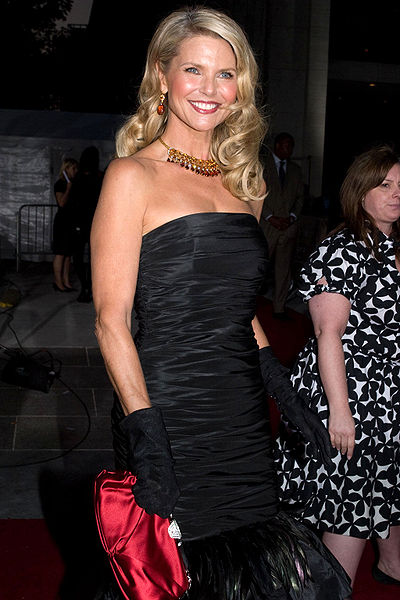 Christie Brinkley (born Christie Lee Hudson; February 2, 1954) is an American model, actress and businesswoman.[2] Brinkley gained worldwide fame with her appearances in the late 1970s Sports Illustrated Swimsuit Issues, ultimately appearing on an unprecedented three consecutive covers starting in 1979. She spent twenty-five years as the face of CoverGirl[3], has appeared on over 500 magazine covers, and has signed contracts with major brands—both fashion and non-fashion.

Brinkley went on to work as an actress, illustrator, television personality, photographer, writer, designer, and activist for human and animal rights and the environment.

Brinkley has been married four times, most notably to musician Billy Joel, several of whose music videos she appeared in. Her fourth marriage, to architect Peter Cook, ended in a much-publicized 2008 divorce.

With a career spanning more than three decades, magazines such as Allure and Men's Health have named Brinkley one of the most attractive women of all time. Her financial holdings in 2018 were worth an estimated US$250 million, primarily as the owner of several companies and real estate.

Brinkley was born Christine Lee Hudson in Monroe, Michigan on February 2, 1954,[4] the daughter of Marjorie (née Bowling) and Herbert Hudson. Her family moved to Canoga Park, Los Angeles, California, where her mother Marjorie later met and married television writer Donald Brinkley in Bel Air, Los Angeles. David adopted Christie and her brother Greg Brinkley. During this time, the family lived in Malibu and then the Brentwood neighborhoods of Los Angeles. Brinkley was educated at Paul Revere Junior High School and attended Le Lycée Français de Los Angeles from 9th to 12th grade.[5] After graduation in 1973, she moved to Paris, France, to study art.[4][6].
Read more...

Brinkley was discovered in 1973 by American photographer Errol Sawyer in a post office in Paris.[7] He took her first modeling pictures and introduced her to John Casablancas of Elite Model Management agency in Paris.[8] Brinkley stated later: "I was basically a surfer girl from California. I never looked like a model."[6] After being introduced to Elite, where Brinkley met the fashion photographers Patrick Demarchelier and Mike Reinhardt[9] who called Eileen Ford and told her about Brinkley,[7] she returned to California, and by the end of a lunch meeting with Nina Blanchard (Eileen Ford affiliate in Los Angeles) she had been booked for three national ad campaigns.[6]

A quick rise to a long career

Multiple appearances on the cover of Glamour soon followed, along with a record 25-year contract with cosmetics brand CoverGirl,[3] one of the longest modeling contracts in history.[6][10] In 2005, CoverGirl again signed Brinkley, using her in ads in magazines and TV commercials for mature skin products.[11]

Brinkley appeared on three consecutive Sports Illustrated Swimsuit Issue covers (1979,[12] 1980[13] and 1981)[14] - the first time that had happened - and appeared in the publication's annual swimsuit issues and television specials for years to follow. Brinkley was featured exclusively in the first Sports Illustrated Calendar and also released two of her own calendars.[15] In 2005, Brinkley was featured in the special Sports Illustrated 40th Anniversary Issue's Hall of Fame, celebrating the most revered figures in the magazine's history and again in 2014, in the 50th Anniversary The Legends.[16] As an editorial model, Brinkley has appeared on over 500 magazine covers,[3] including US, Vogue, Newsweek, Rolling Stone, Esquire, Harper's Bazaar, Cosmopolitan, Glamour and the best-selling issue of Life. She has held major contracts with Chanel No. 19, Prell, MasterCard, Breck, Diet Coke, Anheuser-Busch, Got Milk?, Healthy Choice, Max Factor, Nissan, Noxema, Revlon, Clairol, Borghese Cosmetics, Danskin, Nu Skin, Yardley of London, Halston, Vogue Patterns, Gottex and Black Velvet, among others.[15][17][17] Brinkley has been photographed in six continents in more than 30 countries.[3]

At the Metropolitan Opera opening, September 2008

Brinkley played her first role as an actress in the 1983 film National Lampoon's Vacation as "The girl in the red Ferrari" opposite Chevy Chase; she reprised that role in the 1997 sequel Vegas Vacation.[18] and later spoofed it in a 2008 DirecTV commercial interspliced with footage from Vacation,[19] and again in a 2015 Infiniti commercial as the wife in the Infiniti. (The blonde in the convertible for this spoof is model Scarlett Burke.)[20] In 2011, she appeared as herself in the documentary, King of the Hamptons, which was produced by filmmaker, Dennis Michael Lynch. The film premiered at the 2010 Hamptons International Film Festival.

On April 8, 2011, in New York, Brinkley made her stage debut as Roxie Hart in the long-running musical Chicago. In August, she completed a one-month engagement in the London's production at Cambridge Theatre and reprised the role on Broadway and continued with 182 total performances with the National Touring Company of Chicago in cities including Los Angeles, San Diego, Boston and Hartford.[21]

Brinkley's appearance on NBC's Mad About You was the broadcaster's highest rated half-hour episode since the finale of The Cosby Show.[15] She hosted Celebrity Weddings InStyle, the highest rated special in Lifetime's history. Brinkley appeared on the Today Show in 1983 in a four-part segment featuring beauty tips and, in 1992, began her own television series Living in the 90's — With Christie Brinkley, a daily half-hour show on CNN.[22]

She had a recurring role as Gayle Gergich, the wife of Garry Gergich, on NBC's Parks and Recreation.[citation needed]

In 1983, Brinkley wrote and illustrated a book on health and beauty, Christie Brinkley's Outdoor Beauty and Fitness Book, which topped The New York Times bestseller list.[17]

In 1989, Brinkley was, along with Cheryl Tiegs and Beverly Johnson, one of the three models featured as dolls produced by Matchbox Toys called The Real Model Collection. Brinkley illustrated the cover art for Billy Joel's 1993 triple platinum album River of Dreams. For this, Rolling Stone awarded her the honor of "Best album cover of the year".[11]

Brinkley has designed clothing patterns for Simplicity Pattern[22] and in March 1994 helped design, for brand Nouveau Eyewear, her line of prescription glasses and sunglasses called Christie Brinkley Perspectives with worldwide sales.[15][17] In Spring 1998 she released her own signature fragrance, Believe.[6] Her jewelry collection is manufactured by Swank.[15]

In 1991 Brinkley was considered to have an ideal, all-American look with her blonde hair, blue eyes, slim figure, and soft features, when Allure first conducted a survey taking the pulse of the average American (men and women) searching for their beauty perceptions and preferences.[29]

Brinkley had a guest role in December 2012 on the comedy sitcom Parks and Recreation. In the episode "Ron and Diane" she played Gayle Gergich, wife of Jerry Gergich played by Jim O'Heir.[35]

In December 2012, Brinkley co-hosted Anderson Cooper Live and also danced with Dancing With the Stars alumnus Gilles Marini during the show.[citation needed]

In 1982, Brinkley had a romantic relationship with Olivier Chandon de Brailles, heir to the Moët-Chandon Champagne fortune. The two met at Studio 54 in New York City at a party promoting a calendar in which Brinkley appeared.[36] Chandon died a year later in an auto-race car crash during a private pre-season practice session.[37][38]

In September 2015, it was widely reported that John Mellencamp was in a new relationship with Brinkley.[39] In August 2016, the couple announced their separation after almost a year of dating.[40]

Brinkley winds up to throw an autographed football into the audience during a USO show in the Eagle Sports Complex at Tuzla Air Base, Bosnia and Herzegovina (December 22, 1999)

Brinkley lives on Long Island in Sag Harbor, New York; she previously lived in Bridgehampton and Amagansett, Long Island.[22][48] She and her children are fans of the New York Islanders ice hockey team. Brinkley began doing promotions for the team after being noticed at games.[49] In 2007, she showed her support by writing a blog for NHL.com and filming a commercial.[50] Brinkley helped found a club for cutting, an equestrian sport in which a rider has two and one half minutes to cut as many cattle from a herd as they can.[22]

Since 1998, Brinkley has given nearly $1,000,000 to organizations and candidates of the Democratic Party of the United States, including Hillary Clinton, Barack Obama, Democratic National Committee, Democratic Senatorial Campaign Committee, Democratic Congressional Campaign Committee, America Coming Together and Moveon.org.[48] In the New York delegation, Brinkley served as a delegate on the 2000 Democratic National Convention in Los Angeles.[51] She has also been involved in anti-nuclear activities and campaigned against the restarting of the High Flux Beam Reactor (HFBR) located at the Brookhaven National Laboratory.[52][53]

Brinkley supports animal rights, most notably through the organization PETA,[11] having previously spoken out against the Ringling Bros. and Barnum & Bailey Circus.[54][55] She became a vegetarian when she was 13 years old and then got her entire family to become vegetarians.[56][57]

December 1999, during a Christmas visit to the USO
Report a problem
Send a message to Christie Brinkley at FanPal • 2021