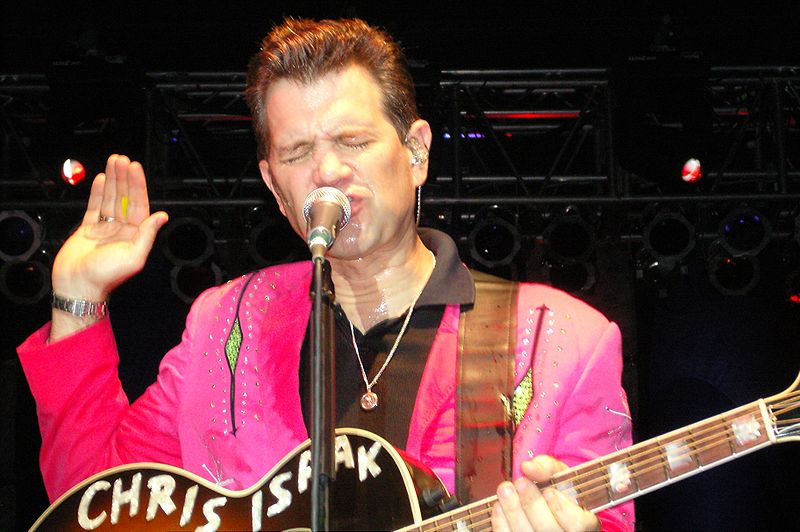 Christopher Joseph Isaak (born June 26, 1956)[1][2] is an American musician and occasional actor. He is widely known for his hit "Wicked Game," as well as the popular hit songs "Baby Did A Bad Bad Thing" and "Somebody's Crying." He is renowned for his signature 1950s rock & roll style and crooner sound, as well as his soaring falsetto and reverb-laden music. He is closely associated with film director David Lynch, who has used his music in numerous films and gave him a role in the film Twin Peaks: Fire Walk With Me. His songs generally focus on the themes of love, loss, and heartbreak. With a career spanning four decades, he has amassed a total of 12 studio albums, and has accumulated numerous award nominations and tours. He has been called the Roy Orbison of the 1990s, and is often also compared to Elvis Presley, Ricky Nelson, and Duane Eddy.[3]

Isaak attended Amos Alonzo Stagg High School in north Stockton, graduating in 1974. He was class president all three years, culminating with his election as student body president in his senior year, along with being the 1974 graduating class valedictorian and head of the all-male cheer squad. He subsequently attended a local college, San Joaquin Delta Community College, before transferring to the University of the Pacific, graduating with a bachelor's degree in English and communications arts in 1981.[6] He also was in an exchange program that allowed him to study in Japan.[7] After graduating from college, Isaak put together his first band, Silvertone. This rockabilly outfit consisted of James Calvin Wilsey (guitar), Rowland Salley (bass), and Kenney Dale Johnson (drums), who remained with Isaak as his permanent backing band.[7]

In 1985 Isaak signed a contract with Warner Bros. Records, and released his first album, Silvertone,[2] to critical acclaim, including from John Fogerty.[8] The name was taken from the band he formed after graduating college. The album's sound was raw and diverse, mingling country blues with conventional folk ballads.[7] Although the album was a critical success, it failed to sell respectably.[9] Two tracks from the album, "Gone Ridin'" and "Livin' for Your Lover," featured in David Lynch's cult classic Blue Velvet. Isaak's self-titled follow-up album was released in 1986 and managed to scrape into the Billboard Top 200.[9] The album saw Isaak hone his style to sophisticated R&B.[7] The artwork for Chris Isaak, was photographed by fashion photographer Bruce Weber. Isaak's contract was renewed in 1988 when Warner Bros. moved him to their Reprise Records label. "Suspicion of Love" appears in the 1988 hit movie Married to the Mob starring Matthew Modine, Michelle Pfeiffer, and Dean Stockwell.[citation needed]

Isaak's best known song is "Wicked Game."[2] First released on the 1989 album Heart Shaped World, an instrumental version of the song was subsequently featured in the 1990 David Lynch film Wild at Heart.[2] Lee Chesnut, an Atlanta radio station music director who was obsessed with Lynch films, played the vocal version and it became the station's most-requested song. Chesnut spread the word to other radio stations and the single became a national Top 10 hit in February 1991. It also reached No. 10 in the UK Singles Chart.[10] The music video for the song was directed by Herb Ritts and was a MTV and VH1 hit; shot in black and white, it featured Isaak and supermodel Helena Christensen in a sensual encounter on the beach, caressing each other and whispering in each other's ears. Another less-seen version of "Wicked Game" is directed by David Lynch and comprises scenes from the film Wild at Heart. "Wicked Game" featured as the backing music in the 2001 TV advertisement for the Jaguar X-Type in the UK. In 1995 Isaak split with longtime guitarist James Calvin Wilsey. That year's Forever Blue album and the accompanying tour featured Hershel Yatovitz on guitar.

In an interview with Mark Needham, an engineer who worked with Isaak on "Wicked Game," Needham claimed that it took several years to put the track together.[11]

In 1999 Isaak's "Baby Did a Bad, Bad Thing" was featured in Stanley Kubrick's final film, Eyes Wide Shut. The song is on his 1995 Forever Blue album. The music video for the song is directed by Herb Ritts, it was shot in color and featured Isaak and French supermodel Laetitia Casta in a motel room. This was Isaak's second collaboration with Ritts.

Isaak composed a theme song for U.S. late-night television variety/talk show, The Late Late Show with Craig Kilborn. In 2001, Isaak starred in his own television show, The Chris Isaak Show. It aired from March 2001 to March 2004 in the United States on the cable television network Showtime. This adult comedy show featured Isaak and his band playing themselves and the episode plots were based on fictional accounts of the backstage world of Isaak—the rock star next door. In 2004 his track "Life Will Go On" was featured on Chasing Liberty's soundtrack, which starred Mandy Moore and Matthew Goode. His track "Two Hearts" was featured in the closing credits of the 1993 film True Romance, directed by Tony Scott, written by Quentin Tarantino, and starring Christian Slater and Patricia Arquette.

Isaak's producer, Erik Jacobsen, was instrumental in his sound for 15 years. Jacobsen is known for his production work with The Lovin' Spoonful, and solo albums from Spoonful's John Sebastian and Jerry Yester. Isaak ceased working with Jacobsen on his 2002 album, Always Got Tonight. In 2007 Isaak opened for Stevie Nicks on her Crystal Visions Tour during the first leg of the tour.[citation needed]

In 2006 he appeared on a duet with Johnny Hallyday covering Fats Domino's hit Blueberry Hill. The duet was recorded and issued on Johnny Hallyday's live album La Cigale (2007, Warner Music). At the end of this record you can hear Isaak thanking the French rock-’n’-roll star as "The King."

Isaak collaborated with John Shanks for his 2009 album Mr. Lucky. He contributed a cover of Buddy Holly's "Crying, Waiting, Hoping" for a tribute album, Listen to Me: Buddy Holly, released in September 2011.[citation needed]

Isaak released an album called Beyond the Sun, which was recorded in Memphis, Tennessee at the Sun Records studio. On September 7, 2015, it was announced that Isaak would be performing at the 2015 AFL Grand Final, along with English singer Ellie Goulding and Canadian musician Bryan Adams.[12]

Isaak revealed in a 2002 interview with Acoustic Guitar that he uses a one-of-a-kind Gibson:

For my electric, I've got a one-off Gibson version of a Gretsch 6120, a sort of Chet Atkins thing. They made one of these things and gave it to me to see if I liked it, and I liked it so much I've been playing it ever since. People told me they thought it was a White Falcon, but it's not. It's just a white Gibson. I don't think they ever manufactured any of the things. They strung up this one prototype, scratched their heads, and said, 'Huh. Give it to Isaak.'[14]

Isaak also plays a Gibson J-200 acoustic guitar, which he uses for songwriting.[15]

Acting and other work

Isaak at a USO show in Washington, D.C.

Isaak has appeared in numerous films, mostly playing cameo roles. He starred, however, with Keanu Reeves and Bridget Fonda in the 1993 Bernardo Bertolucci-directed Little Buddha and played a major role in David Lynch's Twin Peaks: Fire Walk with Me (1992). Other motion pictures include Married to the Mob (1988), The Silence of the Lambs (1991), That Thing You Do! (1996), A Dirty Shame (2004), and The Informers (2008).[citation needed]

Isaak starred in The Chris Isaak Show (2001-04) playing himself and featuring actual members of his band along with actors and celebrity guests.

In April 2010 Isaak was the special guest during Conan O'Brien's The Legally Prohibited from Being Funny on Television Tour performance at the Nob Hill Masonic Center in San Francisco, California.

On September 29, 2011, Isaak received the Stockton Arts Commission STAR Award in his hometown of Stockton, California.[18]

In 2014 he voiced the character of "Enoch," the apparent ruler of the town of Pottsfield, in the second episode of Over the Garden Wall, "Hard Times at the Huskin' Bee."

On May 3, 2015, Isaak was confirmed to be replacing Redfoo on the seventh season of The X Factor Australia.[19] He joins James Blunt and returning judges Guy Sebastian and Dannii Minogue.[20]