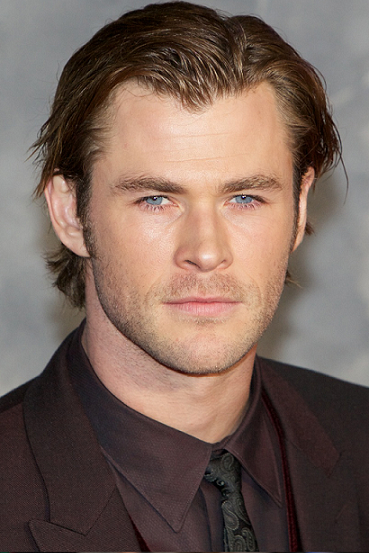 Christopher Hemsworth[1] (born 11 August 1983)[2] is an Australian actor. He rose to prominence playing Kim Hyde in the Australian TV series Home and Away (2004-07). Hemsworth has also appeared in the science fiction action film Star Trek (2009), the thriller adventure A Perfect Getaway (2009), the horror comedy The Cabin in the Woods (2012), the dark-fantasy action film Snow White and the Huntsman (2012), the war film Red Dawn (2012), and the biographical sports drama film Rush (2013).

In 2015, he starred in the action thriller film Blackhat, had a comedic role in the fifth installment of National Lampoon's Vacation series, Vacation, and headlined the biographical thriller film In the Heart of the Sea.[3] The following year, Hemsworth had a supporting role in Sony's reboot of Ghostbusters.[4]

Hemsworth was born in Melbourne,[5] to Leonie (née van Os),[6] an English teacher, and Craig Hemsworth, a social-services counsellor.[7][8] He is the middle of three boys; his brothers Luke (older) and Liam (younger) are also actors. His maternal grandfather is a Dutch immigrant, his maternal grandmother is of Irish descent,[9] and his other ancestry is English, Scottish, and German.[6] He was raised both in Melbourne and in the Australian Outback in Bulman, Northern Territory. He has stated, "My earliest memories were on the cattle stations up in the Outback, and then we moved back to Melbourne and then back out there and then back again. Certainly most of my childhood was in Melbourne but probably my most vivid memories were up there in Bulman with crocodiles and buffalo. Very different walks of life."[5] He attended high school at Heathmont College[5] before his family again returned to the Northern Territory, and then moved a few years later to Phillip Island.[10]
Read more...

In 2002, Hemsworth starred in two episodes of fantasy television series Guinevere Jones as King Arthur. He also made an appearance in soap opera series Neighbours and one episode of Marshall Law.

In 2004, Hemsworth auditioned for the Australian soap opera Home and Away role of Robbie Hunter (played by Jason Smith), but did not receive the part. He was subsequently recalled for the part of Kim Hyde and moved to Sydney to join the cast, appearing in 171 episodes of the series.[11] He left the cast of Home and Away on 3 July 2007.

Hemsworth was a contestant on the fifth season of Dancing with the Stars Australia, partnered with professional dancer Abbey Ross. The season premiered on 26 September 2006, and after six weeks, Hemsworth was eliminated (7 November 2006).

In 2009, Hemsworth portrayed James T. Kirk's father, George Kirk, in the opening scenes of J. J. Abrams' film Star Trek. He played the character Kale in the thriller A Perfect Getaway the same year. He went on to play Sam in 2010's Ca$h, which was the first film he shot when he arrived in the United States. The film's director, Stephen Milburn Anderson, said Hemsworth had only been in the United States for six weeks when he had auditioned for the role, recalling, "Here's a guy who is young, has the right look, is a very good actor and, let's face it, he's beautiful. So I say, we need to get this guy in. I was very impressed".[12] In November 2010, The Hollywood Reporter named Hemsworth as one of the young male actors who are "pushing - or being pushed" onto the Hollywood "A-List".[13] Sony Pictures announced in 2011 that Hemsworth would star in the thriller Shadow Runner,[14] which did not subsequently go into production as of 2014.

Perhaps most famously known for his role as the Marvel Comics superhero Thor in the 2011 Marvel Studios film Thor. He and castmate Tom Hiddleston, who ultimately played Loki, had each auditioned for the role, for which Hemsworth said he put on 20 pounds of muscle.[15] Hemsworth reprised the role in the 2012 film The Avengers as one of the six superheroes sent to defend Earth from his adopted brother, Loki,[16] and in Thor: The Dark World, the 2013 sequel to Thor.[17]

He starred in the horror film The Cabin in the Woods, which was shot shortly after the release of Star Trek but went unreleased until 2012. It led Hemsworth to audition for the role of Thor at Joss Whedon's insistence.[18] Also that year, Hemsworth starred opposite Kristen Stewart in the film Snow White and the Huntsman as the Huntsman. He also played Jed Eckert in the 2012 Red Dawn remake, a role he was cast in after MGM saw dailies footage of a scene from Cabin in the Woods.[18] Hemsworth received the part of Thor two days after being hired for Red Dawn.[18] In 2013, Hemsworth starred in Ron Howard's sports drama film Rush, alongside Daniel Brühl as 1976 Formula 1 World Champion James Hunt.[19] People magazine, in an annual feature, named him its 2014 "Sexiest Man Alive."[20]

In 2015, Hemsworth starred in director Michael Mann's action thriller Blackhat, opposite Viola Davis,[21] and reprised his role of Thor for the fourth time in the sequel to The Avengers, Avengers: Age of Ultron.[22] Hemsworth returned to the set of Home and Away in November 2014 to film a scene as an extra and not as his character Kim Hyde.[23][24] He appeared in the episode broadcast on 19 May 2015.[24] Also in 2015, he co-starred in the comedy film Vacation, along with Ed Helms, a revival of the film series that originally starred Chevy Chase.[25] His last 2015 film was In the Heart of the Sea, based on the book of the same name by Nathaniel Philbrick, with Hemsworth playing first mate Owen Chase. In an interview with Jimmy Kimmel, he revealed that to prepare for the role of starving sailors, the cast was put on a diet of 500-600 calories a day to lose weight.[26] In 2016, Hemsworth reprised the role of Eric the Huntsman in The Huntsman: Winter's War and also portrayed Kevin the receptionist in Ghostbusters.[27][4]

Hemsworth reprised his role as Thor in Thor: Ragnarok, released on November 3, 2017 in the U.S.,[28] and again in both the third Avengers film, Avengers: Infinity War (2018), and its untitled sequel, scheduled for release in 2019.[29] He was originally going to reprise his role as George Kirk in the fourth film of the rebooted Star Trek film series,[30][31] but he left the project in August 2018 after contract negotiations fell through.[32]

Hemsworth began dating Spanish actress Elsa Pataky in early 2010 after meeting through their mutual representatives.[35] They wed in December 2010.[36] They have three children: a daughter born in May 2012,[37] and twin sons born in March 2014.[38] In 2015, Hemsworth and his family moved from Los Angeles to Byron Bay in his native Australia.[39]