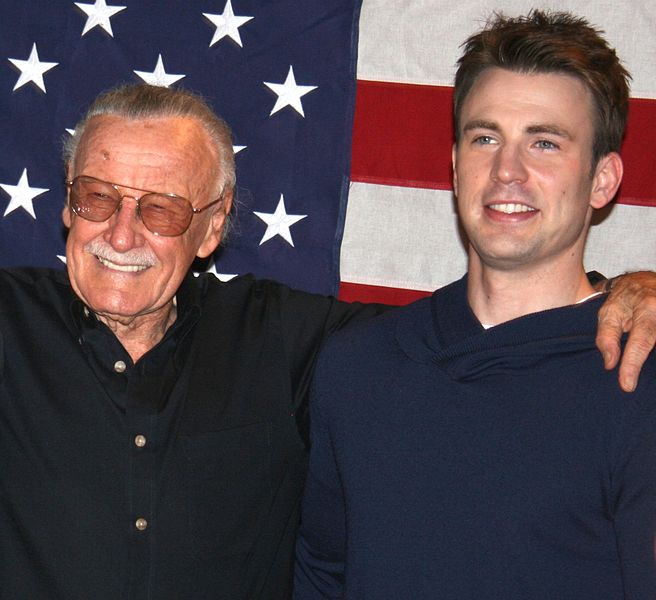 Christopher Robert Evans (born June 13, 1981) is an American actor. Evans is known for his superhero roles as the Marvel Comics characters Captain America in the Marvel Cinematic Universe and Human Torch in Fantastic Four (2005) and its 2007 sequel.

Evans began his career on the 2000 television series Opposite Sex, and in addition to his work in superhero films, he has featured in such films as Not Another Teen Movie (2001), Sunshine (2007), Scott Pilgrim vs. the World (2010), Snowpiercer (2013), and Gifted (2017). In 2014, he made his directorial debut with the drama film Before We Go, in which he also starred. Evans made his Broadway debut in a 2018 production of Lobby Hero.

Evans was born in Boston, Massachusetts, and raised in the town of Sudbury. His mother, Lisa (née Capuano), is an artistic director at the Concord Youth Theater, and his father, G. Robert Evans III, is a dentist.

He has two sisters, Carly and Shanna, and a younger brother, Scott. Carly is a graduate of New York University's Tisch School of the Arts and a high school drama and English teacher at Lincoln-Sudbury Regional High School, while Scott is an actor who was featured on the ABC soap opera One Life to Live. Their uncle, Mike Capuano, represents the same Massachusetts Congressional district formerly represented by Tip O'Neill. His mother is of half Italian and half Irish ancestry. He and his siblings were raised Catholic.

Evans's first credited appearance was in a short educational video titled Biodiversity: Wild About Life! in 1997. In 1999, Evans was the model for "Tyler" in Hasbro's board game Mystery Date. The special edition of the game included an electronic phone, which Evans is shown speaking into on the game box.

After filming wrapped on Not Another Teen Movie, Evans landed lead roles in The Perfect Score and Cellular, and then starred in two independent films in Chicago: Dirk Wittenborn's Fierce People, playing the sinister Bryce, and London, playing a drug user with relationship problems. He then played the superhero the Human Torch in the 2005 comic book adaptation Fantastic Four. Evans reprised the role in the 2007 sequel Fantastic Four: Rise of the Silver Surfer. That year, he starred as engineer-turned-astronaut Mace in Danny Boyle's science-fiction film Sunshine.

In 2008, Evans appeared in Street Kings, co-starring Keanu Reeves, and the Tennessee Williams screenplay adaptation The Loss of a Teardrop Diamond, co-starring Bryce Dallas Howard and Ellen Burstyn. The following year he appeared in the science-fiction thriller Push, with Dakota Fanning and Camilla Belle. Evans performed his own fight scenes, which took weeks to film, and was bruised during filming.

In 2010, he completed filming on co-directors Mark Kassen and Adam Kassen's Puncture in Houston, Texas. The film was selected to debut at the 2011 Tribeca Film Festival as one of the Spotlight projects for the 10th anniversary of the festival.

Also that year, Evans appeared in Sylvain White's The Losers, an adaptation of the comic-book series from the DC Comics imprint Vertigo. Evans then appeared in another comic-book adaptation, Edgar Wright's Scott Pilgrim vs. the World, where he portrayed Lucas Lee, one of Ramona Flowers' seven evil exes.

In 2011, Evans played the Marvel Comics character Captain America in Captain America: The First Avenger, and starred in the film What's Your Number?, a romantic comedy co-starring Anna Faris. There were initially scheduling conflicts, as both films were set to film in the summer of 2010.

Evans had signed on to appear in multiple films as Captain America, and first reprised the role in the 2012 film The Avengers. He next starred opposite Michael Shannon in The Iceman, replacing James Franco, who had dropped out. Evans wore a long wig and grew out a beard for the role. He starred in South Korean director Bong Joon-ho's English-language film Snowpiercer.

In 2014, Evans starred in Captain America: The Winter Soldier. He starred opposite Michelle Monaghan in the romantic comedy Playing It Cool. His directorial debut, Before We Go, debuted at the 2014 Toronto International Film Festival.

Evans said in March 2014 that once his contract with Marvel is up, he might consider doing less acting so he could work more on directing, and believes he will be finished playing Captain America in 2017. In September 2015, however, he said in an interview that he would be willing to sign on for more films as Captain America after Infinity War if Marvel wanted to extend his contract. He starred in the family drama Gifted in 2017.

In 2018, Evans will reprise his role as Steve Rogers in Avengers: Infinity War and will return for its 2019 sequel. He is also set to make his Broadway debut in Lobby Hero, directed by Trip Cullman. The show is set to open in March 2018 at the Helen Hayes Theatre as a part of Second Stage Theatre's first Broadway season.

Although raised Catholic, he has expressed pantheistic views and a great interest in the philosophies of Buddhism.