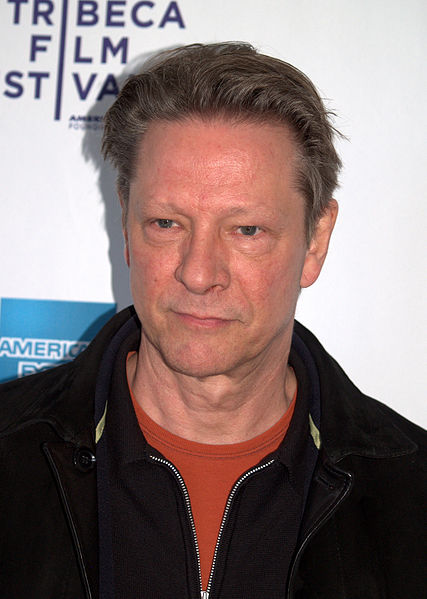 Christopher Walton Cooper[1] (born July 9, 1951) is an American film actor. He became well known in the late 1980s. He has appeared in supporting performances in several major Hollywood films, including the drama American Beauty (1999), the biopic about a NASA engineer titled October Sky (1999), the action spy film The Bourne Identity (2002), the biographical sports film Seabiscuit (2003), the biographical film about Truman Capote, Capote (2005), the geopolitical thriller Syriana (2005), the action-thriller The Kingdom (2007), the crime drama The Town (2010), and the musical comedy film The Muppets (2011). He also portrayed Sheriff July Johnson in the acclaimed miniseries Lonesome Dove, which became one of the most successful Westerns in history.

Cooper won both the Academy Award and Golden Globe Award for Best Supporting Actor for his role in the 2002 film Adaptation. He played a lead role in the historical and political thriller Breach (2007), playing FBI agent and traitor Robert Hanssen. He played Daniel Sloan in the 2012 political action thriller The Company You Keep, and supervillain Norman Osborn in The Amazing Spider-Man 2 (2014). He also portrayed Al Templeton on the 2016 Hulu miniseries 11.22.63.

Cooper was born on July 9, 1951, in Kansas City, Missouri, the son of Charles and Mary Ann (Walton) Cooper.[1][2] He has an older brother, Chuck Cooper (born 1948).[3] His father was both a United States Air Force doctor and a cattleman, and his mother was a housewife.[4][5][6] Both of his parents were from Texas.[4] Cooper grew up in the suburbs of Kansas City, and spent his summers at his family's cattle ranch, located about 15 miles west of Leavenworth, Kansas.[4][6] He was also raised in Las Vegas, Phoenix, and Houston.[7] While attending high school in Kansas City, Cooper worked for a local theater company: "I had a background in carpentry, so I could build sets and work in the wings and shift scenes in the evening."[8] After he graduated high school, Cooper became the shop foreman for another repertory group.[8] He also considered helping his father raise cattle for a living.[6] Cooper avoided getting drafted to serve in the Vietnam War following a stint in the Missouri River Coast Guard.[4][9]

Cooper attended the University of Missouri-Columbia and enrolled in the theater program, originally majoring in set design.[4][8] It was during his sophomore year when Cooper changed his major to acting in order to overcome his "overpowering shyness."[4] Cooper, therefore, took acting classes at the University of Missouri.[6] He recalled in a 1996 interview with The Philadelphia Inquirer, "I started going in and watching some shows at the theater department. I started taking theater classes and auditioned for plays. And once I got into it, it was pretty immediate. I really felt right, felt at home."[8] Cooper also took dance classes at Stephens College.[5][9]

After he graduated from the University of Missouri, Cooper moved to New York City in 1976.[5][10] While living in New York, Cooper shared a one-bedroom railroad flat with four other aspiring actors and dancers.[4] He supported himself by renovating apartments.[4] In addition, he worked in construction and served as a janitor and a chauffeur.[5] At the same time, he studied with Stella Adler and Wynn Handman.[4][5][8] Prior to his film debut with Matewan (1987), Cooper spent the previous twelve years doing stage work with the Actors Theater of Louisville and the Seattle Repertory.[5][6] In 1985, Cooper appeared in the London revival of Sweet Bird of Youth.[10]

Some of his more notable later performances include: Money Train, as a psychotic pyromaniac who terrifies toll booth operators; Lone Star, in a rare leading role as a Texas sheriff charged with solving a decades-old case; as Deputy Dwayne Looney in director Joel Schumacher's 1996 film A Time to Kill (based on the John Grisham novel); as Frank Booker in 1998's The Horse Whisperer; and as a closeted homophobic Marine Corps colonel in American Beauty, a role that garnered him a Screen Actors Guild Award nomination for Best Supporting Actor. To get into character, Cooper said he "depended on a friend who’d fought in Vietnam. I asked him to go deep. What would this man have done? What would be on his walls? On his desk?"[11]

In 2000, Cooper played Colonel Harry Burwell (inspired by Lieutenant Colonel Henry "Light Horse Harry" Lee) in The Patriot. He was nominated for another Screen Actors Guild Award, a BAFTA Award, and won an Academy Award for Best Supporting Actor and a Golden Globe Award in 2003 for playing the role of John Laroche in Adaptation. In 2002, Cooper also appeared in The Bourne Identity as a ruthless CIA special ops director, a role he reprised (in flashbacks) in The Bourne Supremacy.

Cooper appeared in three acclaimed films in 2005: Jarhead (which reunited him with American Beauty director Sam Mendes and October Sky actor Jake Gyllenhaal); Capote; and Syriana. He also acted in the thriller Breach, playing real-life FBI agent and traitor Robert Hanssen. Cooper commented that Breach was "the first studio film where they've considered me the lead ". In 2007, he appeared as a government agent in dangerous territory in the action thriller The Kingdom and voiced the character Douglas in the film adaptation of Maurice Sendak's book, Where the Wild Things Are (2009).

At the 2010 Sundance film festival, Cooper appeared alongside Ben Affleck in the drama, The Company Men, early reviews of which praised Cooper's performance as "pitch-perfect".[12]

In 2015, he starred in the short play Bite the Hand by Ara Watson, for Playing On Air, a non-profit organization that “records short plays written by top playwrights and performed by outstanding actors.”[13][14] In 2017, he and Laurie Metcalf starred in A Doll's House, Part 2, a Broadway play by Lucas Hnath based on Henrik Ibsen's A Doll's House, for which he received a Tony Award nomination. Cooper played Nora Helmer's husband, Torvald.[15]

Cooper portrayed Norman Osborn in the 2014 film The Amazing Spider-Man 2 in an uncredited role. He appeared in Ben Affleck's crime drama Live by Night, which was released in December 2016. In late-September 2018, Cooper was casted in an undisclosed role in Greta Gerwig's film adaptation of Little Women with an ensemble cast featuring Saoirse Ronan, Emma Watson, Timothée Chalamet, Meryl Streep, and Laura Dern.[16]

Cooper met his future wife, Marianne Leone, in 1979 at an acting class in New York City.[3][4][8] On their first date, she helped him carry sheet rock up eight flights of stairs: "That's when I knew this was the girl for me."[4] They married in July 1983.[2][3] Their son, Jesse Lanier Cooper,[17] was born three months prematurely in October 1987.[18] Three days after he was born, Jesse suffered a cerebral hemorrhage and developed cerebral palsy.[6][18][19] Jesse was eventually mainstreamed into Silver Lake Regional High School, where he became an honor student.[17][18] Cooper recalled in a 2003 interview with The Morning Call, "(Jesse) is the best thing that ever happened to us. He's in a wheelchair and he communicates only by computer, but he's taught me so much because he's just so incredibly focused. Now he's in a regular school, which we fought to get him into. He's an honors student, and he's doing great."[6] On January 3, 2005, Jesse Cooper died suddenly and unexpectedly from epilepsy.[17][18] A memorial fund was set up in his name, the Jesse Cooper Foundation.[20] Cooper has said that the death of his son has somewhat helped him understand several characters he played, such as Charles Aiken in August: Osage County (2013)[21] and Phil Eastwood in Demolition (2015).[22]

Cooper formerly maintained residences in Hoboken, New Jersey, and Plymouth, Massachusetts.[8] As of 2003, he resides in Kingston, Massachusetts.[23][24] He has been close friends with frequent collaborator John Sayles since 1985.[8][25] On May 14, 2016, Cooper received an honorary doctorate from the University of Massachusetts Lowell.[26]

Report a problem
Write to Chris Cooper at FanPal • 2020