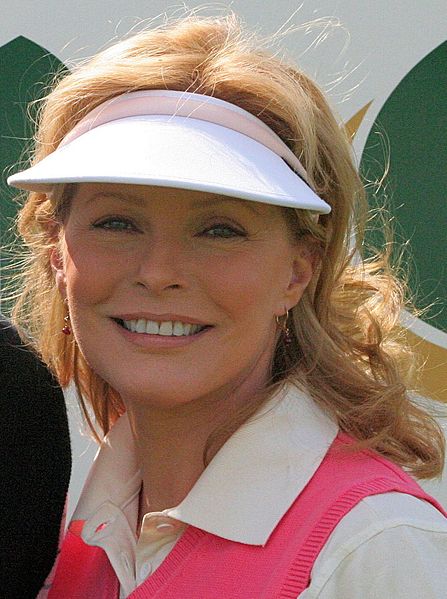 Cheryl Ladd (born Cheryl Jean Stoppelmoor; July 12, 1951) is an American actress, singer and author best known for her role as Kris Munroe in the ABC television series Charlie's Angels in which she was hired for its second season in 1977 to replace Farrah Fawcett-Majors. Ladd remained on the show until its cancellation in 1981. Her film roles include Purple Hearts (1984), Millennium (1989), Poison Ivy (1992), Permanent Midnight (1998) and Unforgettable (2017).

Ladd was born Cheryl Jean Stoppelmoor in Huron, South Dakota,[1] the second daughter of Dolores (née Katz), a waitress and Marion Stoppelmoor (1929-2001), a railroad engineer.[2] She married fellow actor David Ladd, with whom she had a daughter, Jordan.[3] She took his surname as her own, which she kept after their divorce.
Read more...

Ladd came to Hollywood in 1970 to begin a career in music (she was known as "Cherie Moor" when she was the singing voice of Melody on Hanna-Barbera's Josie and the Pussycats animated series, and she also sang on the 1970 album of the same name).[4] She soon began to land non-singing roles in commercials and episodic television, including guest appearances on shows such as on The Rookies, The Partridge Family, Police Woman, The Muppet Show and Happy Days.[5]

Her big acting break came in 1977, when she was cast in the ABC television series, Charlie's Angels, replacing star Farrah Fawcett, who left the show after only one season to pursue a movie career. To make the transition easier for audiences, producers cast Ladd as Fawcett's character's younger sister, Kris, instantly making her a part of the "Angel's family". In the years to come, this practice of replacing Angels became a common event for the show, but Ladd remained a part of the main cast until the show's end in the spring of 1981.[6] While starring in the highly rated Charlie's Angels, Ladd took advantage of her new-found popularity to further her musical career, guest-starring in musical-comedy variety series and specials, performing the National Anthem at the Super Bowl XIV in January 1980, and releasing three albums. She had a top-40 Billboard Hot 100 single and a gold record.[7][5]

Following Charlie's Angels, Ladd remained a familiar face on television and has starred in more than 30 made-for-television films, including as Grace Kelly, the Philadelphia heiress who became a Hollywood glamour girl and then a European princess, in a biopic that was begun shortly before Kelly's death. She also appeared in a number of feature films, such as Purple Hearts (1984), Millennium (1989), Poison Ivy (1992) (featuring Drew Barrymore, who later starred in the film adaptations of Charlie's Angels) and Permanent Midnight (1998). Ladd had the lead role in the television series One West Waikiki (1994-96) and made guest appearances in other TV shows such as Charmed, Hope and Faith and CSI: Miami. From 2003 until the show's cancellation in 2008 Ladd played Jillian Deline, the wife of the lead character Ed Deline (James Caan), in 29 episodes of the television drama series Las Vegas.

In 1996, Ladd published a children's book titled The Adventures of Little Nettie Windship. In 2005, she published Token Chick: A Woman's Guide to Golfing With the Boys, an autobiographical book which focused on her love of golf. For several years, Ladd hosted a golf tournament sponsored by Buick.

In September 2000, Ladd starred on Broadway, taking over the title role from Bernadette Peters in a revival of Irving Berlin's Annie Get Your Gun. She played the role until January 2001, when Reba McEntire took over.[8]

In 2010, Ladd started in the TV film Love's Everlasting Courage for the Hallmark Channel, which aired on October 1, 2011.[10] That same month, she guest-starred on NCIS in the show's ninth-season episode "Thirst" as the love interest of medical examiner Dr. Donald "Ducky" Mallard.[11] In December 2011, she guest-starred in an episode of Chuck, playing Sarah Walker's mother.[12]

Ladd has been married to music producer Brian Russell since 1981 and has a stepdaughter, Lindsay Russell. Ladd is a celebrity ambassador for the child abuse prevention and treatment non-profit Childhelp.