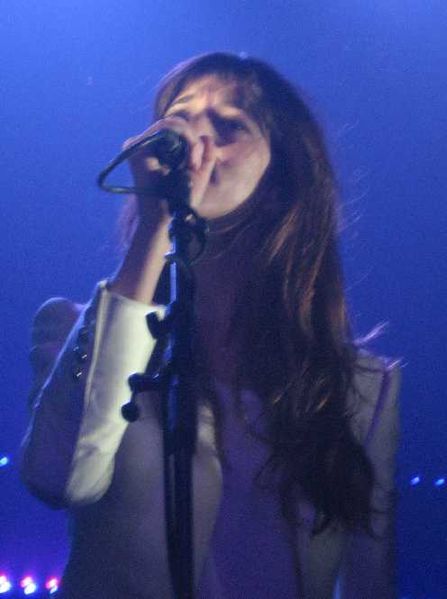 Charlotte Lucy Gainsbourg (born 21 July 1971) is a British-French actress and singer. She is the daughter of English actress Jane Birkin and French singer and songwriter Serge Gainsbourg. After making her musical debut with her father on the song "Lemon Incest" at the age of 12,[1] she released an album with her father at the age of 15. More than 20 years passed before she released the first of four albums as an adult (5:55, IRM, Stage Whisper and Rest) to commercial and critical success. Gainsbourg has also appeared in many films, including several directed by Lars von Trier, and has received both a César Award and the Cannes Film Festival Best Actress Award.

Gainsbourg was born on 21 July 1971[2] in London, to English actress and singer Jane Birkin and French actor and singer-songwriter Serge Gainsbourg.[3] Gainsbourg was born at the height of her parents' fame; they had made headlines several years earlier with the sexually explicit song Je t'aime... moi non plus and by that point had become notorious for their turbulent relationship and multiple artistic collaborations.[4][5] As a result, her birth and childhood were well publicised.[6]

Her maternal grandmother was actress Judy Campbell, and her uncle is screenwriter Andrew Birkin, who directed her in The Cement Garden. She is a cousin of theatre and opera director Sophie Hunter.[7][8][9] Gainsbourg's father was Jewish, whereas her mother is from a Protestant background.[10] Gainsbourg attended École Active Bilingue Jeannine Manuel in Paris and Collège Alpin International Beau Soleil in Switzerland. French is Gainsbourg's first language, but she is also fluent in English.

Gainsbourg was raised in Paris alongside her half-sister from her mother's marriage to composer John Barry, Kate Barry, who died in 2013 after falling out of a window.[11] According to Birkin, both parents were somewhat neglectful, often spending their nights going out to parties and drinking.[12] She has a young brother, Lucien "Lulu" Gainsbourg, born in 1986 from her father's relationship with Bambou. On her father's side she also had two older siblings born from his second marriage to Françoise-Antoinette "Béatrice" Pancrazzi.

By 1980, her parents' relationship had dissolved and her mother left her father for the director Jacques Doillon. Her half sister Lou Doillon was born in 1982 as a result of the union. Gainsbourg would go on to work with her stepfather in the film The Temptation of Isabelle in 1985 and later in Amoureuse in 1992, which also starred her future partner Yvan Attal.

After her parents separated, Gainsbourg's father descended into alcoholism, eventually dying of a heart attack in 1991. Gainsbourg remained devoted to preserving his legacy and preserved his home, saying she hoped to eventually turn it into a museum.[14] She eventually abandoned the project and decided to maintain the house as a private residence instead.[15]

On 5 September 2007, Gainsbourg was rushed to a Paris hospital where she underwent surgery for a cerebral hemorrhage. She had been experiencing headaches since a waterskiing accident in the United States several weeks earlier.[16]

Gainsbourg grew up on film sets, as both of her parents were involved in the film industry. She stated that her mother had pushed her into acting, believing that she wanted to be an actress and encouraging her to make her motion picture debut playing Catherine Deneuve's daughter in the film Paroles et musique (1984).[17]

In 1986, Gainsbourg won a César Award for "Most Promising Actress" for L'effrontée. That same year Gainsbourg appeared in the film Charlotte for Ever about a man who develops incestuous desires for his teenage daughter after his wife dies. Written and directed by Gainsbourg's father Serge Gainsbourg, who also took the role of Gainsbourg's father on screen, the film heightened the controversy that had resulted from Gainsbourg's debut single Lemon Incest, which had similar themes and also was created and sung with her father Serge causing press speculation that the material was autobiographical.[18]

In 1988, she appeared together with her mother in a set of films, Kung Fu Master and the documentary drama Jane B. by Agnes V., both directed by Agnès Varda. In 1993, Gainsbourg made her English-speaking debut in The Cement Garden, written and directed by her uncle, Andrew Birkin. Her stage debut was in 1994, in David Mamet's Oleanna at the Théâtre de la Gaîté-Montparnasse. In 1996, Gainsbourg starred as the title character in Jane Eyre, a film adaption of Charlotte Brontë's 1847 novel. In 2000, she won the César Award for "Best Supporting Actress" for the film La Bûche.

In 2003, Gainsbourg starred in 21 Grams, with Naomi Watts, Sean Penn and Benicio del Toro. In 2006, Gainsbourg appeared alongside Gael García Bernal in Michel Gondry's The Science of Sleep. In 2007, she appeared as Claire in the Todd Haynes-directed Bob Dylan biographical film I'm Not There, also contributing a cover version of the Dylan song "Just Like a Woman" to the film soundtrack. In 2009, she won the award for Best Actress at the 2009 Cannes Film Festival for the film Antichrist.[19] Gainsbourg starred in the French/Australian production, The Tree, released in 2010, and in Lars von Trier's science fiction disaster film, Melancholia.[20] She was on the jury for the 62nd Berlin International Film Festival in February 2012.[21] In May 2012 Confession of a Child of the Century premiered, where she starred alongside the British musician Pete Doherty.[22]

Gainsbourg collaborated with von Trier once again on his 2013 film Nymphomaniac, in which she played the title role. The 5½-hour film depicts the life of a sex addict from youth to middle age. When asked about the nature of the role, Gainsbourg responded, "The sex scenes weren't so hard. For me, it was all the masochistic scenes. Those were embarrassing and, yes, a little humiliating."[23]

In 2014, she starred in Three Hearts and Olivier Nakache & Éric Toledano film Samba, for which she was nominated for a Lumières Award for Best Actress. She then played Dr. Catherine Marceaux in Independence Day: Resurgence, sequel of the 1996 film Independence Day. In 2017, she starred alongside Michael Fassbender and Rebecca Ferguson in the crime thriller film, The Snowman.

Gainsbourg made her musical debut on the controversial song "Lemon Incest" in 1984.[24] Sung by Gainsbourg and her father Serge, the lyrics implied a pedophiliac relationship between a father and daughter and led people to believe that the material was autobiographical.[25] Gainsbourg, who was 13 at the time of the song's release, later stated that she had just begun boarding school and was therefore unaware of the controversy regarding the song until she was much older.

In 1986, she released her debut album Charlotte for Ever, which was produced by her father. In 2000, Gainsbourg was featured on the Madonna album Music on the track "What It Feels Like for a Girl". The lengthy spoken introduction by Gainsbourg is taken from the film The Cement Garden, which inspired the title of the song. The track was further remixed for a single version in 2001, with Gainsbourg's The Cement Garden speech repeated during the song.

In 2004, she sang a duet with French pop star Étienne Daho on his single "If". In 2006, Gainsbourg released her second album 5:55 to critical acclaim and commercial success, reaching the top spot on the French charts and achieving platinum status in the country. In the UK, the album was moderately successful, reaching No. 78 (The single "The Songs That We Sing" only achieved No. 129). Gainsbourg attributed the twenty-year break between her debut album and 5:55 to her father's death and her reluctance to explore a musical career without him.[26]

In late 2009, Gainsbourg released her third studio album, IRM,[27] which was produced by Beck.[28][29] One of the influential factors in the album's creative process was her time spent filming Antichrist.[30] Gainsbourg's head injury in 2007 influenced the title of the album "IRM", an abbreviation for the French translation of magnetic resonance imaging (MRI). During her brain scan, she began to think about music. "When I was inside that machine," she said, "it was an escape to think about music. It's rhythm. It was very chaotic."[31]

Her song "Heaven Can Wait" was chosen as the Starbucks iTunes Pick of the Week on 2 March 2010.[32] Her song "Trick Pony" appeared at the beginning of the Grey's Anatomy episode "Perfect Little Accident" (Season 6, Episode 16/airdate: 25 February 2010), is featured on the FIFA 11 soundtrack[33] and was used in the 2012 Teleflora Super Bowl advertisement featuring supermodel Adriana Lima.[34]

In 2011, Gainsbourg released the double album Stage Whisper, a collection of unreleased songs from IRM and live tracks.[35] In 2013, Gainsbourg released a cover version of the song "Hey Joe", recorded with Beck, for the soundtrack of the film Nymphomaniac, in which she was the lead actress. Her music influenced artists such as Tove Lo, who cited the simplicity and quirky lyrical content of Charlotte's IRM as the main inspiration behind her career in music and said that it "opened a new world" for her as regards sound.[36]

Since 2014, Gainsbourg has been supporting the Hear the World Foundation as ambassador. In her role she advocates for equal opportunities and a better quality of life for people with hearing loss. She was featured in the Hear the World Calendar 2014, the proceeds of which were to benefit the foundation's projects.[37]

Gainsbourg worked for four years, mainly in New York,[38] with producer Sebastian Akchoté (known as SebastiAn) on her fifth studio album, titled Rest. Rest is a portrayal of her feelings after her father Serge Gainsbourg and her half-sister Kate Barry's death, with the theme of alcohol addiction. About the album, she said "The album took a different direction. I wanted to express not only with sadness but with anger."[39] The lyrics are in English and French.[38] In September 2017, music videos for the singles "Rest" and "Deadly Valentine" were released, both are directed by Gainsbourg herself.[40] The music videos feature her children.[38] The album was released on 17 November 2017.[41]

Gainsbourg's longtime partner is French-Israeli actor/director Yvan Attal, whom she met on the set of the 1991 film Aux yeux du monde.[42] Gainsbourg and Attal are not married, and Gainsbourg has attributed her reluctance to do so to the fact that her parents never married. Attal publicly proposed to Gainsbourg on 19 June 2013 during an awards ceremony when he received the French National Order of Merit.[43] In April 2014, Attal confirmed that they were still unwed, with no plans to marry.[44] Together they have three children: a son, Ben (b. 1997), and daughters Alice (b. 2002) and Joe (b. 2011).[45][46]

Gainsbourg at the 2011 Cannes Film Festival