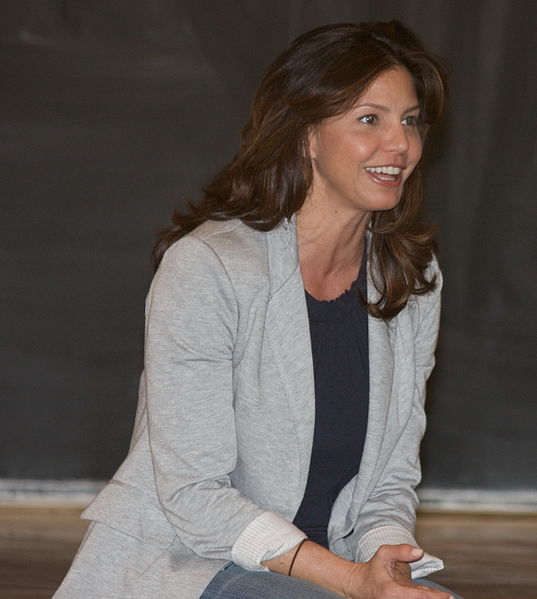 Carpenter was born in Las Vegas, Nevada,[2][3] the daughter of Christine, a bird sanctuary worker, and Don Carpenter, a salesman. She has two older brothers, Ken and Troy, and two nieces, Chrissy and Mackenzie.[4] She is of Spanish (from her maternal grandfather), French, and German descent.[5][6] Carpenter attended Bishop Gorman High School in Las Vegas; she was also a part of a song-and-dance troupe which performed in the Las Vegas area beginning when she was nine.[3]

When she was 15, her family moved to Rosarito, Mexico[2] and then to San Diego where she attended Bonita Vista High School and Chula Vista School of the Creative and Performing Arts.[2] After graduation, Carpenter traveled throughout Europe. Once she returned to San Diego again, she worked as a video store clerk,[2] an aerobics instructor, and in property management.[3] In 1991, she worked as a San Diego Charger cheerleader.[7] In 1992, she moved to Los Angeles.

While swimming in San Diego in 1991, she and two friends were attacked by Henry Hubbard Jr., a former San Diego police officer and serial rapist who attempted to subdue her two male friends at gunpoint. During the struggle, her two friends and Hubbard were all shot, forcing him to flee the scene. Her friends survived. Hubbard was arrested, convicted and sentenced to 56 years in prison for a series of rapes and robberies. Carpenter brought Hubbard's police-issue flashlight from the beach, which he had left at the scene, and the flashlight became a key piece of evidence against him.[8][9][10][11]

Carpenter was discovered by a commercial agent while waiting tables in Los Angeles to save money for her college education.[2] This led to her role on theatrical productions and more than twenty commercials.[12] She made her first television role in 1994 by appearing in an episode of Baywatch.[12] Shortly after that, she landed a starring role on Aaron Spelling's short-lived soap opera Malibu Shores.[7]

In 1996, Carpenter auditioned for the title role in the TV series Buffy the Vampire Slayer but instead was cast as Cordelia Chase,[13] a snobby and popular high school student. After three seasons on Buffy the Vampire Slayer, Carpenter was offered an even larger role as the same character on the spin-off series Angel along with David Boreanaz. She played Cordelia Chase for four seasons on Angel, as well as Jasmine for most of the fourth season. Although her character leaves the series during Angel's fourth season, Carpenter returned for the 100th episode in the fifth and final season because she felt the character's fans deserved closure.

Carpenter at the Fan Expo 2007 Convention in Toronto

In 2004, Carpenter had a three episode guest appearance on the TV series Charmed as a psychic demon[14] called Kyra and played a recurring role on NBC's Miss Match, appearing in four episodes. She also had a recurring role as Kendall Casablancas in the TV series Veronica Mars[14] for the 2005-2006 season, appearing in 11 episodes. Carpenter guest-starred in the first-season finale of the ABC Family comedy-drama series Greek and reprised her role in two episodes of Season 2. According to TV Guide in September 2007, she was set to join the cast of The Apprentice: Celebrity Edition,[15] but instead chose to do a guest appearance on the show Back to You as well as a 2 episode role on the short-lived series Big Shots.[16] Carpenter also had a guest appearance in an April 2009 episode of CSI: Crime Scene Investigation.

Carpenter has starred in an assortment of made-for-TV and direct-to-video movies including the sex comedy What Boys Like, the horror film Voodoo Moon, and the romantic comedies See Jane Date and Relative Chaos on ABC Family (the latter of which co-starred fellow Buffy alum Nicholas Brendon). She also appeared in the mysteries Flirting with Danger and Cheaters' Club on Lifetime and the Syfy movie House of Bones broadcast in 2010,[18] around the same time as her guest spot in Legend of the Seeker.

Also in 2009, Carpenter starred in production company Red Sparrow's first film, Psychosis, which was released in early 2011. In August 2010, she had a supporting role in Sylvester Stallone's The Expendables.[19] After the success of The Expendables, Carpenter was cast in Human Factor[20] and in the indie thriller Crash Site.[21] She appeared in an episode of the seventh season of Supernatural alongside Buffy co-star James Marsters. In 2012, Carpenter landed a recurring role as Rebecca Sewell in the first season of ABC Family's drama The Lying Game. She was upgraded to a series regular for the second season. Later, Carpenter reprised her role as Lacy in The Expendables 2.

On August 28, 2013, Surviving Evil (original working title: I Survived Evil)[22] debuted on Investigation Discovery, with Carpenter as host; in the premiere episode, Carpenter herself was featured as a crime survivor, revisiting the horrific attack she and two friends suffered at the hands of violent serial rapist and police officer Henry Hubbard, Jr. on San Diego's Torrey Pines State Beach in 1991.[23]

In the June 2004 issue of Playboy magazine, Carpenter appeared on the cover and in a ten-page nude layout. When asked by People magazine in 2005 about her nude pictorial and whether she would ever pose for Playboy again, she replied, "I don't know. I did Playboy for a very specific reason. Not only was it a good financial move, but it was about the place I was at in my life. I had just had my son and I'd gained 50 pounds during pregnancy. I wanted to get back to my old self. I wanted to feel desirable and sexy. So I thought, 'What if I went full throttle?'""[27]