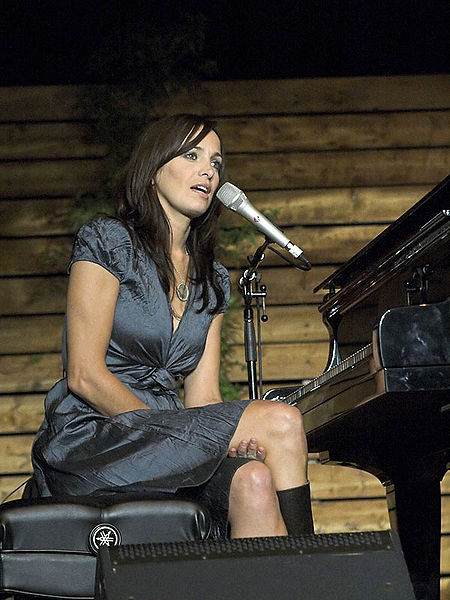 Chantal Jennifer Kreviazuk CM (/ʃɑːnˈtɑːl ˌkrɛviˈæzək/; born May 18, 1974) is a Canadian singer, songwriter, composer, pianist, and actress. Born in Winnipeg, Kreviazuk pursued music from a young age before signing with Columbia Records in the 1990s. Her debut studio album, Under These Rocks and Stones, was first released in Canada in 1996 and saw favorable commercial success before being issued in the United States the following year to critical praise. Kreviazuk released two additional studio albums with the Columbia label, Colour Moving and Still (1998) and What If It All Means Something (2002), both of which saw moderate commercial success worldwide. She signed with Sony BMG for her fourth studio album Ghost Stories (2006), which reached number two on the Canadian Albums Chart.

Since 2003, Kreviazuk has co-written and composed numerous songs for other artists as well as film soundtracks, and has appeared in several Canadian independent and short films. Her fifth studio album Plain Jane was released by Canadian independent label MapleMusic Recordings in 2009. Her sixth and most recent studio album, Hard Sail, was released by Warner Music Canada in 2016.

Kreviazuk's debut album, Under These Rocks and Stones, was first issued in Canada in August 1996 before being released in the US June 1997 to critical praise.[1][2] The album sold over 150,000 copies in Canada according to SoundScan, fueled mostly by the singles "Surrounded" and "God Made Me".[3] Three videos from the album received modest play on the video channel MuchMusic and radio ("God Made Me", "Believer" and "Wayne"), but it was a fourth, "Surrounded", that became her first major Canadian airplay hit in 1997. That year, Kreviazuk received her first Juno Award nomination as Best New Artist.[4] She also took part in the 1998 Lilith Fair music festival; "Surrounded" was included in the live compilation album from that year.

In 1999, Kreviazuk released her second album. Titled Colour Moving and Still, it featured tracks written with her new husband, Raine Maida, lead singer of Our Lady Peace.[5] The lead single from the album "Before You" became a huge radio hit in Canada and she performed the single on the 2000 Juno Awards, where she won two awards for Best Adult/Pop Album and Best Female Artist. Kreviazuk released two more videos from the album, "Dear Life" and "Far Away", as well as an additional radio release, "Souls", which was also remixed and was released as a promo vinyl for the M1 & Steve Fernandez Remix.

Her third album, What If It All Means Something, was released in 2002. This album also featured multiple collaborations with Maida. The first single, "In This Life", was a hit in Canada. Kreviazuk performed the song live on The Tonight Show with Jay Leno.

Kreviazuk began writing and recording her fourth album in her home studio in August, 2005, with Maida producing. The first single off the album, "All I Can Do", was made available on her official website and MySpace page prior to the release of the album. On July 24 the album premiered on the Canadian music channel Much More Music along with a behind the scenes special. The album, Ghost Stories, was released August 29, 2006.

She is featured on a song called "Over My Dead Body" by fellow Canadian recording artist Drake from his 2011 album Take Care.

She featured on rapper Jay Rock's track Pay for It, which she performed alongside Jay Rock and Kendrick Lamar on Saturday Night Live on November 15, 2014.

In November 2014, Kreviazuk released a new single called "I Will Be", speaking to her desire to want to help those who feel alone and isolated. She sang the song live on December 12 on the Toronto radio station 104.5 CHUM FM.

Kreviazuk's work has appeared on many soundtracks for films and television shows. In 1998, Kreviazuk scored her only international hit to date with a cover of "Leaving on a Jet Plane", a song written by John Denver and popularized by Peter, Paul and Mary. The song appeared on the soundtrack to the blockbuster film Armageddon and was that album's follow-up single to Aerosmith's "I Don't Want to Miss a Thing". The soundtrack album also featured a remix of Our Lady Peace's single "Starseed". The song Leaving on a Jet Plane was also on a trailer for The Terminal, and on TV spots for The Prince and Me and De-Lovely.

In 1999, Kreviazuk recorded a cover of the Randy Newman ballad "Feels Like Home" for the Dawson's Creek soundtrack, as well as How to Lose a Guy in 10 Days. She also performed a cover version of The Beatles' "In My Life" as the theme song for the NBC television drama series Providence.

In 2002, Kreviazuk recorded "Another Small Adventure" which was played in Stuart Little 2 and was also on the soundtrack.

In this Life was featured in the film Saved! and also in a trailer for the film The Door in the Floor starring Jeff Bridges, as well as in an episode of the CW Television Network's Smallville. In May 2003 was the soundtrack of the "Episode 20" from "Everwood" in WB. Kreviazuk's "Time" was played in the credits of the movie Uptown Girls, and featured in an episode of the MTV reality show, Laguna Beach: The Real Orange County, the pilot episode of the ABC romantic comedy/drama Men in Trees, the CBS drama Joan of Arcadia, and the ABC family movie Lucky 7. Her song "This Year" was featured on the Serendipity soundtrack. In 2005, two new songs written and performed by Kreviazuk were also featured on the soundtrack of the movie The Sisterhood of the Traveling Pants. In 2006, "It's All About a Kiss" played during the film Just My Luck. The song "Weight of the World" is also featured during the credits of the 2003 film How to Lose a Guy in 10 Days and in the us television series Wildfire.

Songwriting for other artists

Since 2003, Kreviazuk has co-written many songs for other artists, often collaborating with her husband Raine Maida. In 2003, Kreviazuk and Maida collaborated on a number of tracks with Avril Lavigne for Lavigne's second album Under My Skin. Kreviazuk and Maida also contributed songs to Kelly Clarkson's 2004 album Breakaway, The Veronicas' The Secret Life of the Veronicas, Marion Raven's 2005 and 2007 albums Here I Am and Set Me Free and recently Cheyenne Kimball's debut Hanging On in 2006. Their most recent collaboration came on the song "Permanent" for David Cook's self-titled album David Cook. She also helped write a song called "Gardenia" which appears on Mandy Moore's 2007 album Wild Hope. In 2011, she appeared on the rapper Drake's albumTake Care; she wrote part of the song "Over My Dead Body" and sang the chorus. In 2012 Chantal wrote the Pitbull ft. Christina Aguilera single Feel This Moment with The Messengers. She also wrote Josh Groban's single "Brave" with Josh Groban and Thomas "Tawgs" Salter. In 2014 she wrote a song with Shakira, released on her self-titled album. The song is called "You Don't Care About Me". She also worked with Jennifer Lopez on her album "A.K.A." and the song "Emotions".

Kreviazuk performing at Busking for Change 2009

Kreviazuk was also included in the songwriting of "If I'm Dancing on Glory" by Britney Spears.

In 2001, Kreviazuk made her big-screen debut as a main character in David Weaver's indie film Century Hotel (co-starring alongside Sandrine Holt and Mia Kirshner). She also co-wrote the movie's theme song, "Can't Make it Good", with Maida. In 2007, Kreviazuk starred in Pretty Broken, a short film about a woman dealing with mental illness. Kreviazuk also co-produced the movie.[7]

Kreviazuk has contributed vocals to various releases by other artists. She sang background vocals on a Nightmare of You song called "I Want to Be Buried in Your Backyard", which was released on their 2005 self-titled debut album. She has also contributed to Maida's solo EP, Love Hope Hero. Kreviazuk also provided additional vocals on a Men, Women & Children song titled "Monkey Monkee Men", from their 2006 self-titled debut album. She performed vocals for Chris Botti on the song "The Look of Love". Kreviazuk also appears on Canadian singer-songwriter Ryan MacGrath's 2010 record, "Cooper Hatch Paris". She performed a duet with the artist entitled "Bird & Cage".

Kreviazuk also has a MySpace page, where she posts about her daily life, her thoughts on world politics, as well as updating fans with the latest on how writing/recording for her album is going.

On March 27, 2010, Kreviazuk headlined a concert held at Yonge-Dundas Square in Toronto to celebrate WWF's Earth Hour. In 2010, she contributed the song "Na Miso" to the Enough Project and Downtown Records' Raise Hope for Congo compilation with Bibiana Mpoyo. Proceeds from the compilation fund efforts to make the protection and empowerment of Congo's women a priority, as well as inspire individuals around the world to raise their voice for peace in Congo.

In December 2014 Kreviazuk was appointed a member of the Order of Canada along with her husband Raine Maida by Governor General David Johnston for their charitable and humanitarian work.[8]

Kreviazuk was born in Winnipeg, Manitoba[9] and attended Balmoral Hall School School for Girls. Kreviazuk's parents are Carol and John. John Kreviazuk is the founder and principal owner of Krevco Pools in Winnipeg. Kreviazuk is of Ukrainian descent from her father and maternal grandfather.[10] She has two brothers, Michael and Trevor.[11] She is the first cousin of businessman and philanthropist Josh Kreviazuk[12] of Winnipeg, and is also the second cousin of curler and 2013 Scotties Tournament of Hearts champion Alison Kreviazuk.

In 1994, Kreviazuk received multiple jaw and leg fractures in a serious motorcycle accident in Italy and spent several months recuperating.

Kreviazuk met Raine Maida, the lead singer of Our Lady Peace, at a Pearl Jam concert in Toronto in 1996.[13] They married in December 1999,[14][15] and have three sons: Rowan Michael (born January 2004), Lucca Jon (born June 2005), and Salvador 'Sal' Daniel (born June 2008).[16] In honour of their tenth wedding anniversary, Kreviazuk and Maida renewed their wedding vows in Costa Rica in November 2009. The family lives in Toronto and also has a home in the USA.

Kreviazuk is a member of the Canadian charity Artists Against Racism. [17]

Report a problem
Write to Chantal Kreviazuk at FanPal • 2021