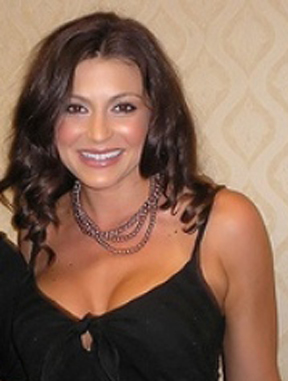 Cerina Vincent (born February 7, 1979) is an American actress and writer best known for playing Maya the Yellow Galaxy Ranger in the television series Power Rangers Lost Galaxy and Suzy Diaz in Stuck in the Middle, as well as her film appearances in Not Another Teen Movie, Cabin Fever, It Waits, and Everybody Wants to Be Italian.[1] She has written three books with Jodi Lipper, and writes a regular column for The Huffington Post.[2]

Vincent was born on February 7, 1979 in Las Vegas, Nevada, to parents of Italian descent.[1][3] Vincent loved to perform from an early age, encouraged by her mother who was a dance instructor.[1] She performed in a Christmas production at Diskin Elementary School, learning the lines for all the characters.[1] She also appeared in productions at the Rainbow Company Youth Theater, which was sponsored by the Cultural Affairs division of Las Vegas. In 1996, at the age of sixteen, Vincent won the Miss Nevada Teen USA title and competed at Miss Teen USA. Though she made it to the top 15, she failed to place at the pageant (televised live), which was held in Las Cruces, New Mexico.[3]

Vincent graduated from Durango High School in 1997, and moved to Los Angeles, where she attended Marymount College on a scholarship.[1] Between classes she went on auditions and eventually landed several commercials and a role on USA High for the USA Network.[1] In 1999, she appeared in her first film role as a bratty teenager in the thriller Fear Runs Silent, starring Billy Dee Williams.[1] Vincent's first major role as an actress was as the Yellow Galaxy Ranger Maya in the 1999 television series Power Rangers Lost Galaxy. Vincent later recalled, "It was a great way to learn a lot and get a taste for this business on a small show like that, but for kids. It was cool to be a role model for kids."[3]

In 2001, Vincent appeared in the feature film spoof Not Another Teen Movie as the foreign exchange student Areola who appears throughout the entire film nude. The character was a spoof of Nadia, Shannon Elizabeth's character, in American Pie (1999). Vincent found the role challenging, never having appeared nude in a film, or even auditioned for a nude role. During the course of filming, however, she became more comfortable with the character.[1] In a 2011 interview, Vincent commented on her experience performing nude for the first time:

It's weird, it's hard because your body is your body and it's personal. It's easier to shoot that scene because everyone was professional and my character was ridiculous—I did many different accents in the movie, and it was funny ... it was a comedy. So, shooting the scenes was the easy part—with it being out there forever and ever and ever ... that's more of a mental ... it screws with your head a little bit and you question your decisions, but I don't have any regrets.[4]

In 2003, Vincent starred in the R-rated horror film Cabin Fever, which featured some of her most memorable film moments, including her "leg-shaving" scene and the "like being on a plane" seduction and sex scene. The film included topless scenes and two sex scenes with two different characters. Fearing that she would be typecast into nude roles, Vincent was cautious about over-exposing herself in the film, which became a point of contention between her and director Eli Roth.[1]

Starting in 2004, Vincent appeared in a series of theatrical and television films, including Murder-Set-Pieces (2004) as the L.A. Girl, Intermedio (2005) as Gen, and Conversations with Other Women (2005) as Sarah the Dancer. In 2005, she appeared in her first starring role in the film It Waits (2005) as forest ranger Danielle "Danny" St. Claire. In 2006, she appeared in The Surfer King as Tiffany, Seven Mummies as Lacy, and the Sci-Fi Channel original movie Sasquatch Mountain as Erin Price, alongside Lance Henriksen. In 2007, she appeared in the television films Manchild and Wifey, as well as Return to House on Haunted Hill as Michelle, and Everybody Wants to Be Italian as Marisa Costa. In 2008, she appeared in Toxic as Malvi, the independent film Just Add Water as The Mrs., and Fashion Victim as the TV Reporter.

Vincent returned to television in 2005 with appearances on CSI: Crime Scene Investigation, Palmetto Pointe and Sex, Love & Secrets. Since then she has worked on the series Bones (2006), Two and a Half Men (2008), Gary Unmarried (2010), Zombie Family (2012), Mike & Molly (2012), and most recently in The Walking Dead (2012-13). Vincent also returned to films in 2012, appearing in Complacent as Myah Sanderson, Chasing Happiness as Andrea, and played the title role in MoniKa, for which she was the executive producer. In 2013, Vincent appeared in The Thanksgiving House in the role of Ashleigh,[1][5] and produced and starred in the acclaimed horror short Skypemare which also starred Annika Marks, Ryan Dillon, and Adam J. Yeend; the film screened at Telluride Horror Show and ScreamFest 2013 in Los Angeles.[1][6]

Vincent has a small role in the indie movie Broken Memories about Alzheimer's. It's a special film to Cerina, hitting close to home. She had an uncle with Alzheimer's who was being taken care of by her aunt, and eventually lead to the man's death. The film touches on all these points.

In 2016, Vincent became part of the main cast of Stuck in the Middle, portraying Suzy Diaz.

Vincent and her co-writer Jodi Lipper have written a regular column for The Huffington Post since 2007.[2] The pair have also authored three books: